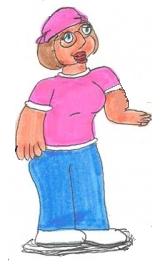 Meg Griffin is a character from Seth MacFarlane's animated sitcom Family Guy. Despite her being a cartoon character, Chris would like to nail her. Emphasis on would – Meg was 17 years old, and due to dumb laws, every time Chris proclaims his desire of carnal love from Meg, he feels obligated to voice his sincerest wishes that MacFarlane would "let Meg turn 18". (These frequent and fervent pleas should not, under any circumstance, be interpreted as indication that Chris has any desire to ram her against the wall right now.) Chris completely misses the fact that even though the laws in Virginia state that sex between a 17-year-old and anyone over the age of 18 as a class 1 misdemeanor, the age of consent in Rhode Island, where the show is set, is currently 16.

In the video he uploaded on 9 December 2009, Chris discusses his hope to be a guest star on the show, and to romance Meg canonically.

It is relevant to note that Chris did get his wish, and Meg finally turned 18 in Season 10 of Family Guy.

In order to make it look like he isn't cheating on Lovely Weather, Chris now claims that Meg forced herself upon him. 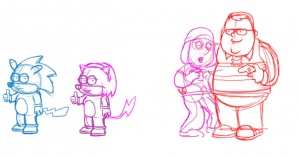 There was a running gag where Meg would get bullied. It is speculated that Chris is attracted to Meg because he believes that they're both often the subject of others abuse and mistreatment, therefore seeing her as a kindred spirit. Chris has taken umbrage to the fact Meg is treated so badly in the show and presents himself in the comic as being her protector, even though the thought of Chris protecting anyone is patently ludicrous. Her name may also have something to do with it.

It is also fair to say that Chris probably has the idea that, if she were real, Meg would come running to him due to the maltreatment that she receives from both her family and society in general. However, in the show, she is seen dating and crushing on normal teenage boys, so Chris is sadly mistaken in this respect. 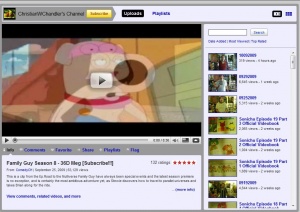 On several occasions, Chris has given us too much information about his obsession with Meg. He once favorited an animation of Meg with expanding breasts. On 8 October 2009, he featured a clip from the episode "Road to the Multiverse" (depicting a hot alternate-universe Meg) on his channel, and posted a comment in the video where he said he'd "be all over her sweet pussy and breasts" if Seth MacFarlane would let Meg turn 18.

In 11 February 2010, Chris featured this video on his channel again, oblivious to the fact that it had been long since deleted from YouTube due to a copyright claim. There are few rational explanations for this activity.

Meg comments on Chris's masculine bosoms and past Buddha belly.

Chris's insane fantasies finally came to a head in Sonichu #10, when Meg, who is mysteriously attracted to the sound of Christian and the Hedgehog Boys, suddenly appears and gushes about being a fan of his. Explosively, Chris admits to being a fan of hers as well. After dealing a rogue passer-by a knuckle sandwich, Chris and Meg get down to a bit of tonsil hockey and Meg promises Chris he can nail her. Hard.

Unfortunately for Chris, Meg is nothing but a fake; he's being trolled by Silvana (even in his own comics, he cannot escape). Due to crappy comic writing, we're not sure if the anti-gay cure has yet taken effect in her and if she's still got the fabled "both parts" at this point, so it is up to interpretation.