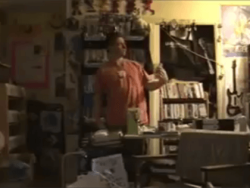 In late February 2010, Chris made several videos involving a unknown person codenamed the Magical Man, most notably the Magical Man Potion video in which this man portrays Chris's alter ego. As one of a select few people to be filmed inside the Chandler household, and the only one outside of Chris's immediate family, this "Magical Man" has been the subject of intense speculation.

This remains one of the more mysterious unanswered questions of the Chris-Chan saga. Originally it was believed that his appearance would herald the beginning of new epic misadventures for Chris, prompting heated speculation about his motives and plans. Since Magical Man never appeared again, the matter became completely trivial. However, since Chris's trolls have become autistic by gluing all of their attention to computers, it's hard to let things go at that.

Chris has revealed that the Magical Man is a friend of Kim Wilson's, but his full identity remains unknown. 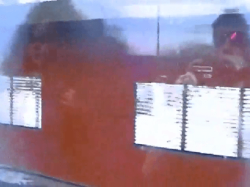 His presence was first felt in July 2009 in Rollin' and Trollin', where he films Chris walking around downtown Charlottesville and asks him questions from off-screen.

Seven months later the Magical Man again lent his services as cameraman for Chris's 23 February address on the eve of Christian Love Day. Chris quotes from Independence Day and talks about an impending "personal change," foreshadowing his next video. Chris would later deny knowing where the speech was copied from, claiming that it was written for him by his friend.[1] At the time, though, there was no major indication of anything special going on. The video is of noticeably higher quality than Chris's usual shit, and the camera is clearly being held by someone rather than being set in a fixed position, but a troll happening to notice these things might chalk it up to Chris wasting money on a new camera and getting his mother to hold it for him.

The troll world collectively shit bricks, however, when Chris later uploaded Magical Man Potion, a skit in which he plays a mad scientist who concocts a Jekyll and Hyde-style potion. Viewers expecting Chris's "Buddy Love" to just be himself in a shitty costume were astonished to see a rather handsome man, wearing similar clothes to Chris and quoting Beetlejuice. That Chris could successfully recruit someone to appear in one of his videos, or that a troll could successfully infiltrate his sanctum sanctorum, captivated the imaginations of trolls everywhere.

A third video, PS3 Tutorial for my fans, saw Chris show his PS3 menus to his mystery guest, who filmed the whole thing. Throughout the video the man tries to feign interest in every stupid thing Chris shows him, and he later begins panning around the room to get footage of the stuff plastered on Chris's walls.

A few days later, Chris uploaded an apology to Alec, and commented "my friend had told me the truth of how my past words against Alec and his crew were making me look like a troll. I banged my head against a wall in realization and embarassment right before I started that video."[2] This "friend" was quite possibly the mysterious visitor, to whom Chris probably babbled about those dang dirty trolls.

Chris has received relatively normal guests on his eighteenth birthday[3], so it's not impossible that trolls speculated that the Magical Man was a family member, church member or acquaintance who happened to bring a camera and let Chris use it. However, his interest in filming Chris's room may indicate his true motives as a field agent trying to go where no troll had gone before.

In trying to make sense of the Magical Man, many quickly jumped to the conclusion that he had to be someone we've already heard of, such as Clyde Cash or Alec Benson Leary. On several occasions[4][5] Chris has forgiven and tried to befriend enemies when he thinks he has made them see reason, so it's not impossible.

On 2 March 2010, Chris announced that he had made peace with Alec and that Alec had given him an Asperchu medallion,[6] which is believed to be the same medallion the mystery guest wore in the potion video. This strengthened the case that the Magical Man was Alec, burying the hatchet with Chris in person. However, this was debunked when the 25 February phone conversation between Alec and Chris was released, in which their relationship is still quite chilly and Alec doesn't know what Chris did on his birthday. Most likely, Chris had received the medallion in the mail prior to his birthday, and it was totally unrelated to Magical Man until it came in handy as a prop for the transformation.

On 10 February 2012, nearly 15 days before the 25 February conversations began, evidence surfaced that a user on #sonichu, PodMonkey, is the true Magical Man, citing a Skype log with Kacey as evidence.[7] However, on the CWCki Forums the Jew in the Pickle Suit denied that it was PodMonkey. Christorians continue to speculate on who he is.

Whoever the Magical Man is, he most likely has chosen not to disclose his real information. If he is still active in the trolling community, he evidently has no interest in taking credit for his accomplishments or exploiting his relationship to Chris, perhaps deriving quiet satisfaction from his identity being the greatest unsolved mystery in Christory.

In September 2017, internet personality Merryweathery secured an interview with Chris on his Internet Dream Lounge podcast. Opening up to Kiwi Farms, Merryweather revealed that Chris had an "interesting answer" with regards to a question on the identity of the man:

In the interview, Chris remarked that the Magical Man is a friend of one his gal pals ― he did not say which. When asked by Merryweathery, he stated that they were introduced as an attempt to get Chris comfortable with having male friends. He also stated that the Magical Man is now a married man, having married in his early 30s. Given this was after his appearance in Chris's videos, it can be assumed that he is around Chris's age. Chris added that he has not really kept in touch with him much since his marriage.

During the events of Jessica's breakup with Chris, upset by Kim Wilson's misunderstanding of the situation, Chris blurted out that Kim is the gal pal who knows Magical Man's identity.[8]