Surfshack Tito (also known as Don) is a mysterious troll who first emerged in early March 2010. His arrival was reminiscent of the rise of Jack Thaddeus in the summer of 2009. Like Jack, he first made his mark by hacking Chris's PlayStation Network accounts.

The nickname "Surfshack Tito" is a reference to the corpulent surf-shop owner from the Nickelodeon kids' cartoon Rocket Power. During the exchanges with Chris, most of them from Tito are ended with a Tito-styled word of wisdom. The choice to go with the name is most likely inspired by an infamous copypasta about Tito.

Based on Chris's insults towards Tito in the e-mails and videos, it was assumed that Chris believes that the actual Tito from Rocket Power is trolling him. However, the truth is that the image attached to an e-mail shows a photoshopped image of the Wallflower standing next to a really tall dark guy. The photo is left out of this article due to an agreement with the Wallflower.

It's easy to see what the Wallflower fell for, isn't it?

Chris first addressed Tito in a video released on 2 March 2010. His comments were brief and cryptic. Chris merely referred to Tito by name, threatened him with doom in his nightmares, and delivered a Curse Shot attack.

A week later, trolls discovered the identity of the Wallflower, throwing Chris into a flailing rage. Initially, Chris seemed to blame Clyde for the breakup of his latest one-sided relationship, but on 14 March 2010, he released a video suggesting that he viewed Tito as the culprit. In that clip, he declares: "Tito. Listen to me, you son of a bitch. Your-your days are numbered." Threats involving a shillelagh and Chris's deadly pocket knife followed.

Tito apparently kept up the pressure on Chris through the next few days of March 2010. On 18 March, Chris released yet another threatening video, in which he accused Tito of stealing the Wallflower from him, called him a "womanizing rapist" and a "pickle-suited nigger", and alluded to e-mails he had received from Tito (their contents unspecified, but Chris definitely didn't like them).

However, since the end of the Wallflower saga, Surfshack Tito has slipped from Chris's consciousness and has not made any further appearances in Chris's videos. He is, however, an important figure behind the August 2010 videotaped encounter of Chris at Fashion Square Mall. 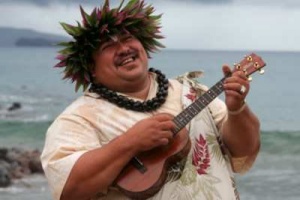 Tito in real life, enjoying a ukulele after another successful trolling plan.

In August 2011 Chris returned after a hiatus from YouTube to announce that he had received documents which revealed Tito's real identity. Referring to him as Don, Chris demanded a public apology from Tito for hacking the PSN and $1,000, among other things.

During mid-March 2010, Tito exchanged several e-mails with Chris, baiting him with regard to the revelation of the Wallflower's identity and other subjects. Their conversations reveal that Chris was aware of his gal-pal's interest in gay slash fiction, and was apparently willing to look past it (the quest for china trumping all other considerations). The e-mails also feature Chris employing the word "nigger". Note that Surfshack Tito is actually Hawaiian, not a niggo.

Between late August and early September 2010, Tito resurfaced in Chris's failed plot to scam him and Clyde Cash. Their e-mails reveal Chris's intentions behind destroying his PS3 and waiting at the mall; he sought a bounty of $9,001 towards his PS3's destruction and very poorly attempted to cheat Tito and Clyde out of the money.