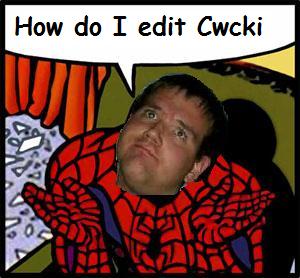 Summary of the incident.

After Chris discovered the CWCki in March 2010, he demanded that pages related to his family and gal pals be removed, giving two deadlines. Around midnight on 1 April, past the second deadline, he decided to attack CWCki, signing up as GodofThunderGodofWar. In true CWC style, his vandalism was less than impressive. In fact, since he made them on April Fools' Day, many users just assumed that it was an elaborate and lulzy prank on the part of the administrators. But no, it was f'real. Christian vandalized the CWCki's articles to make them look as if they are praising him. As usual Chris's tenuous grasp of grammar made his edits stick out like a sore thumb.

Chris later returned under the guise of JenkinsJinkies, making several posts from 5 May 2010 to 13 July 2010. Chris returned again about a year later as Christianchandler on 4 November 2011, part of the 28 October 2011 aftermath. He uploaded three pictures of Michael Snyder.

Although Chris originally demanded that the CWCki's administrators only edit or remove pages related to his friends and family, it is perhaps telling that when he finally set himself to actively vandalizing the site, he ignored those pages, choosing instead to make edits glorifying himself.

Listed below are all of Chris's edits made on his accounts, unedited by trolls and exactly as he wrote them. An exception is made for headings, which are replaced with bold text in the quoteboxes.

His first action was editing the Did You Know? column, removing the majority of the factoids while adding a few of his own, most of which were merely rewrites of existing comments. Hilariously, he begins to glorify himself only after stating "The CWCki is a LOAD OF BULL", effectively nullifying his own attempts.

The following comments however, were left untouched.

Some of the factoids were likely left alone because Chris failed to notice their sarcasm and mistook them for compliments. On a troll site. It should also be noted that the Pixelblocks factoid was also untouched, save for Chris adding the word "not" in the middle. It was likely that he perceived it to be a spelling mistake and decided to correct it, even though the word "neither" instead of "either" later in the sentence causes Chris to add a mistake instead. Chris finally relinked Song of Christian to "10th grade", a broken link.

*Altered for this article. This normally links to a YouTube video, but external links mess up the quoteboxes.

Chris then changed the "Article of the Now" from Ian Brandon Anderson to himself.

This edit is perhaps the most condensed essence of Chris to ever emerge in pseudo-paragraph format. Between the utter butchery of the English language, blatant ego stroking, and unintentional creepiness ("Yes, friends, it gets far sweeter"), Chris pretty much sums up what legions of trolls have spent nearly half a decade trying to record for the world. Also note that, while on a website dedicated to trolling him, he still attempts to insert links to other parts of the wiki. In all likelihood, Chris planned to vandalize these elements as well but stopped due to stress. In the original edit, the link "brilliant" linked instead to the Fail page. Much like the 10th grade link example above, Chris removed this part and created a red link.

A couple of minutes after, he made the infamous CWCRockin4Way.jpg the Picture of the Now.

Not much needs saying here. Chris chose the image and added some random-access humor. Why this image? Nobody knows. Also, the red link this time was actually put in entirely by Chris himself, rather than being another unintentional mistake. Why he thought the CWCki would have a page on "Sweet, Sweet Sex" is anyone's guess.

In his first edit on the new account, Chris commented on the hacking of the PS3, saying the supposed bug was just an antenna. However, later that day he tore out the antenna anyway, just to be safe.[1]

Chris then turned to the List of Chris's PSN game downloads, clarifying that his Resistance: Fall of Man add-on pack was not bought by the trolls who took over his PSN, but his Killzone 2 pack was.[2] He also said that the Downfall he bought was a movie, not a video game,[3] and removed a slanderous mockery implying that his duck was small.[4]

Chris created the bizarre Coffee Place article, quoted below, in which he ranted about Amanda, a part-time manajerk, who wouldn't give Chris a The Twilight Saga: Eclipse Sweepstake token because he only bought a $1.09 Icee.

This edit was the first where Chris began to make his presence known. All edits under the JenkinsJinkies name were subtle up until this point, where any effort of subtlety ends. Chris made it obvious that it was him right from the start, both from his poor spelling and his terrible attempt to imitate what he believes trolls are like; for example, he obviously believes trolls to be racist, so he goes off on a tangent about black people halfway through. He believes that all trolls have sexual issues, so he acts like an outright misogynist in the last paragraph. He also attempts using internet slang like the word "butthurt", which he somehow manages to use as a verb. Chris also updated the places template accordingly to link to his new article.

For the sake of archiving, the CWCki has locked editing for the Coffee Place article, and it can still be viewed today, as Chris originally wrote it.

After CWCkians later arrived and saw that a contributor had put up a shitty article with no citations or real evidence of anything happening, they assumed a troll pretending to be Chris made the article, or else a really stupid person, and put up a deletion template. Chris noticed and leapt to the article's defense on the talk page with this textwall.

Here, Chris established his troll backstory and continued trying to act as close to what he believed a troll to be like as possible. This time he plays the part of a sadist who hates Chris because he's special, was bullied at school, and had daddy issues, because that is what real trolls are like entirely.

In response to Clyde leaving Chris a message on his user talk page, asking for his personal information so he could send him a reward for providing them with information, Chris posted this strange rambling.

The main focus of the message seems to be Chris establishing more of his troll backstory, giving excuses as to why he couldn't give Clyde his details, and dropping as many troll buzzwords as possible, like "Anon" and "LULZ". He also inquires about the hookers sent to his house by Bryan Bash, likely so he can take advantage of their services to get rid of his hated virginity. Also notice how even when he's deep undercover as a Chris-hating troll, he still feels the need to bolster his own ego, claiming to be genuinely afraid of Chris; something no other than Chris himself could ever consider seriously other than a joke.

When Clyde pointed out appropriately that being afraid of Chris indicated that Jenkins was a pussy, Chris replied with:

Again, despite being undercover as a troll, Chris spends time trying to convince Clyde and others that he is very strong, intelligent and will probably kill them all. Again, these are things which only Chris could ever seriously believe. Also add "wild as a serial raper" to the list of memorable Chris-Chan quotes (and English fails. It should be "wild as a serial rapist").

And of course, where would we be without a little advertising? Even while pretending to be a troll, Chris still couldn't resist breaking cover yet again to advertise his ModNation Racers beta tracks.

This was his last edit on the CWCki before he signed up for Trollin Train, which was a scheme by Clyde and Surfshack Tito to trick Chris into destroying his PS3. It ended in great success. All further JenkinsJinkies dumbfuckery is documented on the Trollin Train article.

Chris's first action under this account was to upload three photos of Michael Snyder taken with his 3DS during the 28 October 2011 incident. The first was taken from the interior of The GAMe PLACe, and was put on its CWCki article. The other two were taken in the parking lot from inside Son-Chu; they were added on Snyder's article, one of them replacing a now-deleted image of Shylock from The Merchant of Venice. Chris added his own captions, in which he hilariously mocked Snyder's weight and accused him of being a child-molester, while leaving the Jew gentile phrase unaltered.

The photos Chris uploaded are below, including his captions.

Chris proceeded to make the second photo the Picture of the Now...

...And subsequently added mentions of all three to Da Update.

Chris returned about 80 minutes later to upload two new pictures. The first, a carry-over from the elevator scene in Sonichu 8,[5] is of an anime girl named XBOX360ko who is a human with every feature of an Xbox 360. He then replaced the second Snyder photo with a picture of a colorful fox. The bottom-right corner reads ©ME ME ME ME ME. The purposes of both photos are unknown.