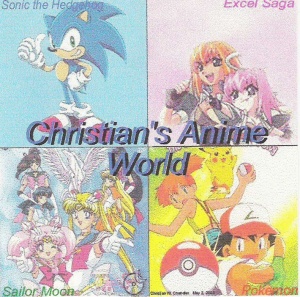 Chris has liked anime since at least 2000.

Anime (アニメ) is a colloquial term for Japanese animation, a rather popular style that's been subbed/dubbed/emulated for its many hit series worldwide, drawing the attention of many loyal followers, including Chris. Over the years, Chris has taken quite an interest in the medium. Whether it be for inspiration or self pleasure, it's managed to make itself quite a large part of Chris's life. Chris enjoys the artform to some extent, as well, although it's not his primary obsession; nevertheless, he's watched a lot of anime, bought plenty of anime through the PlayStation Network, and swiped as many ideas as he can get his head around from his favorite anime series. 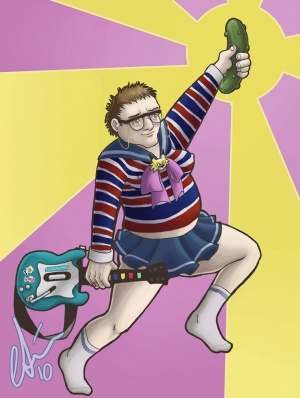 It's not clear when Chris first discovered Japanese cartoons, although it's safe to guess that Pokémon or Dragon Ball Z were the seeds that sparked his interest, as it was for millions of other kids in America during the turn of the millennium. He was a serious Pokémon enthusiast by the late '90s, and by 2004 he had enough interest in anime generally to attend the Anime Mid-Atlantic convention in Richmond, Virginia.

While Chris is often associated with online anime culture and is often slapped with the "weeaboo" tag, he actually doesn't appear to be into anime as much as people think he is. He returned to Anime Mid-Atlantic in 2005, but wouldn't go to another convention for years, and even then the only anime-oriented convention Chris has been to ever since was OmegaCon. (He considered a trip to Baltimore's Otakon convention in 2010, but primarily as a way of meeting Jackie in person.)[1] In his posts on the Adult Swim forums, he didn't have much to say about the Japanese imports on the Adult Swim schedule, except to note that he didn't like the cartoonish male nudity in Crayon Shin-chan (big shock there) and he wanted to see more anime featuring "very-close-to-nude girls" (even bigger shock).

Chris still ripped off characters and story concepts from anime left and right, however, and he still watched some newer anime series. His PSN account shows that he downloaded the entire "harem" comedy-drama Shuffle! in 2009; given that it stars a hapless twit who finds himself surrounded by willing women for no very good reason, Chris probably loved it (he has yet to comment on the scene where the main character got his eye cut by his psychotic galpal). He also downloaded all of Gunslinger Girl in early 2010, doing plenty to undermine his contention that he isn't a pedofork. 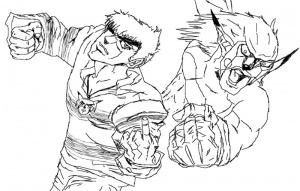 Chris summoning his stand,「Let Me Call You Sweetheart」.

According to his Netflix queue from around November 2009, Chris rented a number of anime in big DVD sets. His anime sets centered around three of his likes: Sonic, Transformers and scantily-clad women. In terms of Sonic, only three disks were seen rented, all three centered on Sonic X. It is more than likely that before the queue was taken, he had seen the other disks that comprised the series. While he had most of the Transformers series that were made in the last ten years, some of those were part of the Transformers saga known as the Unicron Trilogy: Armada, Energon and Cybertron.

The rest of the anime, as stated earlier, revolves around women — strong women who are capable of defending themselves without simpering over a man, unlike some creatures we all know and love. Some of those films and series included Read or Die, Slayers Return, Elfen Lied and, probably the least surprising of all, Kekko Kamen, a comedic action series featuring a heroine who battles evil while stark naked. The last series might have had a particular impact on Chris, as the face-rape of Jason Kendrick Howell in Sonichu 8 is very similar to Pubic Hair Jump, a move by which the title character of Kekko Kamen defeats her enemies. Elfen Lied is a rather surprising choice for Chris given its notoriously dark and gruesome imagery and themes, but given certain elements of the series, perhaps it's not too surprising.

The Idea Guys used images from Symphogear and Sword Art Online Alternative Gun Gale Online as part of their brainwashing of Chris. Chris has watched a few episodes of Symphogear, and has noted how one of the characters in the series, Chris Yukine, is referred to by the lead character Hibiki as "Chris-chan". He hasn't made any word on Sword Art Online, but does own SAO: Lost Song for the PlayStation 4.

In 2020, Chris made the somewhat dubious claim that watching Cells at Work! would strengthen one's immune system against coronavirus.[2] He also posted about BNA: Brand New Animal.[3]

Although Chris was interested in anime before he began drawing his Sonichu comics, he didn't start giving the characters in his comic an obviously anime-inspired look until Sonichu #5, which he completed in the spring of 2006. This was almost certainly the result of Megan Schroeder's influence — she was a big fan of Sailor Moon and other popular Japanese cartoons, and Chris was pursuing her especially fervently at the time. Practically speaking, this shift in style involved giving his characters huge, prismatic, saucer-like eyes, which make them look more stoned than animu, or "set-theoretic intersection" (∩) eyes. He also made use of creative elements that work in anime but not in a sequential comic, as well as tedious and unnecessary clichés common to anime.

Needless to say, despite the radical artwork style change in his comics, Chris still was cockblocked.

Since his relationship with Megan deteriorated (eventually blowing up in his face), anime hasn't been so obvious an influence on Chris’s artwork. He still goes overboard with the giant saucer eyes from time to time, though.

Anime Chris has ripped off 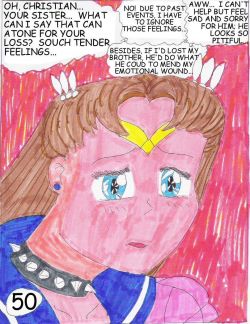 So pitiful, it's true. An example of Chris's anime-inspired artwork.

Like every other form of entertainment he enjoys, Chris views anime as a rich source of ideas that he can swipe and integrate into his own "original" works. Aside from the most obvious victims of his anti-creativity (like Pokémon), these are some of the shows he’s abused.

The End of Evangelion 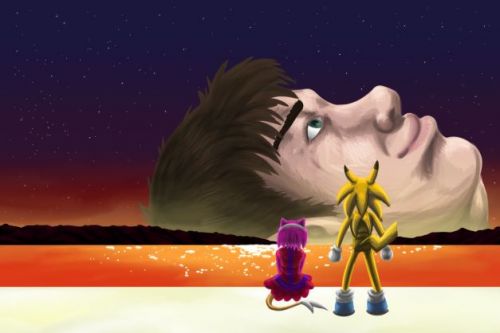 Art made by lilbooty wipe

Ivy got Chris to see The End of Evangelion, a movie that serves as the finale to the anime series Neon Genesis Evangelion, as inspiration for finishing Sonichu 9.[4][5]

Chris's summary: A generic tale of a boy's struggle for acceptance... a lot like him. Chris apparently didn't see any symbolism in the film (yes, in a franchise infamous for its usage of it), or if he did he's too stupid to see what it symbolized.

Chris was familiar with Evangelion prior to watching the movie at Ivy's behest, "but not really a heavy watcher".[5] Despite this, Chris owns a soap dish in the shape of the character Rei Ayanami, as pictured in his hotel at Anime-Mid Atlantic in 2005. It's likely that Chris saw this item at the convention, didn't even register the figure as an Evangelion character, and bought it because he thought a soap dish with a "hot anime chick" on it would make for a fun novelty item.

The End of Evangelion is known for its usage of the song "Komm, süsser Tod" ("Come, sweet death"), performed by Arianne Schreiber, which is played during its apocalyptic climax. This song has been used by Christorians and other certain followers as a theme song for the end of Christory, especially after the incest situation became public.