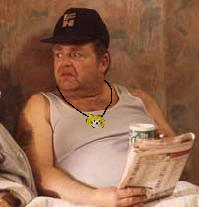 Netflix is a website which allows one to either rent movies on DVD, or stream them over the internet. Netflix offers streaming services through the Wii, Xbox 360 and PlayStation 3, among many other systems. Being obsessed with television, Chris frequents Netflix. On this page is a collection of his orders and streams from 2009 onward.

As the list shows, Chris spends an awful lot of time watching stuff he has on his Instant Watch queue, whether they be classic BBC sitcoms or adult cartoons. On two occasions, he actually spent more than six and a half hours a day watching Keeping Up Appearances and South Park. Is it any wonder he doesn't update his crap?

Chris also watched the South Park episode "Big Gay Al's Big Gay Boat Ride", but did not seem to take to heart its message of tolerance.

Chris's queues give a more complete perspective on his video-watching habits. Notable among the entries is a large number of mediocre-to-terrible romance films and documentaries; judging from their titles, they were chosen in the hopes of finding some mass debating material. There are also quite a few horror films. It should be noted that Fritz the Cat, a film with an extreme amount of yiffing, is on the list.

Chris's ratings are denoted with an asterisk.