"The High School Story" is a piece of alternate reality fiction Chris authored on the CWCipedia as part of his backstory for the Private Villa of Corrupted Citizens. 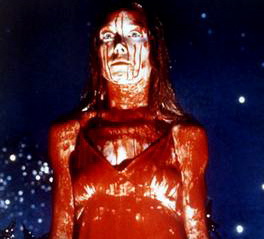 In it, Chris creates another Mary Sue persona, Terrah LeAnne Yowman (one gender-flipped Mary Sue wasn't enough for Chris), a high-functioning autistic young lady with psychic powers. She is accused of being a lesbian even though she is STRAIGHT, and all because she has more male friends than gal-pals, showing us that Chris has no idea how lesbians act in real life, and was drawing inspiration from his own high school life. Despite supposedly being bullied, anyone who accuses her of lesbianism is beaten up by "a nearby homophobe". With little transition beyond establishing a guy-pal with a suspiciously feminine name, Chris retells the story of his "seinor prom" inexplicably fused with his graduation.

Like Chris in his own real-life graduation, Terrah receives no special awards despite the high quality of her artwork. She reacts rather unreasonably by exploding the high school, killing everyone there. She is thereafter cursed to wander the halls for eternity, although how there even are halls for her to haunt is a bit of a mystery since she just annihilated the entire fucking building.

Chris, as always, fails to understand the differences in gender relations and perception in society, as while a man who hangs out with a lot of women as strictly friends will get called gay, a woman who hangs out with a lot of guys is more likely to be called a "tease" or a tomboy. The only reasonable interaction in the story — a boy proposing to a girl on prom night, which is a melodramatic cliché but still happens in real life once in a while — is soured when one realizes "Tippanston" is meant to be a gender-flipped Tiffany Gowen, a girl Chris knew from high school, which means he also still wants a heroine fresh from the shop to rescue him from a world that doesn't appreciate his "art."

Perhaps this desire to be rescued is what prompted him to try out the gender-flip itself, as well: In heterosexual romantic relationships, it's generally the guy who is expected to initiate things by asking the girl out. Chris, however, given his noviophobia, the Infinitely-High Boyfriend-Factor, and never having to work for anything in his life, would prefer to take the passive role. Therefore, he creates a female alter-ego, for whom this passiveness will hopefully be seen as more societally acceptable. Sadly, Terrah fares just as badly as Chris did and dies a virgin with rage.

This story also confirms (again) that Chris is terrible at making up names, with "Tippanston" and "Francine StripeCheer" joining the ranks of Simonla.

Interestingly, Francine StripeCheer is an analog to Bionic, rather than Sonichu. Notice how Bionic the basketball-playing hedgehog was turned into a cheerleading raccoon, as Chris is far too sexist to have a girl actually playing a sport.

Despite the inherently small framework of a short story, Chris still manages to make many continuity errors. In addition to the above-noted incomplete complete destruction of the school, it is also said that some students survived the hell sent hissyfit by leaving the prom early, despite it also being stated that all the attendees stayed till the "FINAL END". Chris also proposes two alternative futures had Terrah not lost her shit at the prom, which in context seem mutually exclusive; one in which she anxiously awaits the school reunion so she can ask Tippenston to dance to "return the favor", and another in which Tippanston proposes to Terrah after the prom (and she presumably accepts). Thus, even when Chris is writing about things that are hypothetical in-universe, he still manages to screw it up.

The whole story is, of course, an obvious rip-off of the 1976 Stephen King film Carrie, in which an unattractive young girl with budding telekinetic powers is bullied so severely that she ends up destroying her prom hall and killing hundreds. It has been suggested that Chris is too sheltered to have read the novel; it contains some intense and raw themes, rather, Chris has probably seen the movie. By no coincidence, the movie Carrie appeared in Chris's Netflix queue shortly before he wrote this story. Considering how Chris can equate the death of his dog to the death of a human being, it's easy to think he would consider not getting an undeserved minor art award exactly as bad as (if not worse than) having swine's blood dumped on him and being ridiculed by his peers.

Oh, and also, this is one of the only stories not from the backwaters of 4-chan to glorify a homophobe beating the shit out of people.