EXCLUSIVE Manchester High School 2000 Reunion Required NOW is a video in which Chris informs his former classmates that he wishes to organize a Manchester High School reunion very soon, seemingly unaware both that his organizational skills lack the capacity to plan a good prom and that a reunion for his year already has been planned. He does so in a manner that assumes that everyone knows him and regularly follows his videos.

After his plea, Chris goes on to claim that divine retribution is coming for the trolls, tells a hilarious joke about his visibly growing girth and gives advice on how to avoid being trolled. The best part is where he urges the viewers to keep their private information off the internet only moments after giving out his real name, full street address and phone number yet again. Chris also claims to be a "Trollbuster", part of a mysterious and unknown group working worldwide to stop trolling and cyberbullying. Bear in mind that he easily could have done this in a separate video.

The video came after almost three months of radio silence from Chris, but, aside from a hairline that has receded considerably and a new wardrobe, it is obvious that nothing about him has changed.

The video opens with Chris holding a digitally edited picture of the rear of his ModNation Racers School Bus shakily in front of the camera for approximately nine seconds. The bus has "CWC" splashed across the top, with a license plate "USA" in red, white and blue. When he finally speaks, he is holding up a Manchester High Yearbook much as he once held Optimus Prime. His tone is wistful and nostalgic.

Hello. I am well known on the Internet, sadly. I am Christian Weston Chandler of... Ruckersville, Virginia. I was a Manchester High School student, graduated class of 2000. [brief pause, dramatic glasses removal] Aaand, I am looking into having the reunion... or putting it together. Because I have not heard from anyone about it... not even from the principal of Manchester High. Of which... so in that- so with that I-... I am looking to- I am looking out... I am looking out to everyone, to... all, to my class- to my 2000 class mates... we know who you are and I know who you are, got your names-

[Chris slaps the cover with his hand. His tone becomes particularly wistful at this point.] 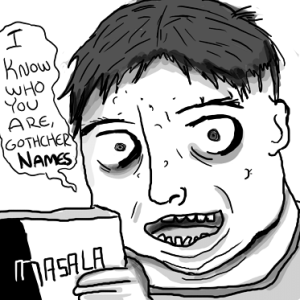 -got your names in the year book, in the... senior year book. In my class. I have have been looking forward to this r-reunion... since the senior prom, where at the end of that slideshow... it said "See you in ten years flguh the reunion". [Chris's face becomes somber.] The reunion hasn't happened yet. [Chris displays a partially complete Claw of Fail, imploringly gesturing at the camera much as he did towards The Wallflower. His face is pained.] And it HAS to happen. It was basically promised... [Chris pauses.] ... not only to me, but to everyone who was at that prom. So this reunion has to happen and I'm going to start it by... reaching out t- reaching out to my classmates. Espe- and also, it would be helpful if I can also... get in contact with those who put together the senior prom... back in 2000.

So with that I urge- I urge, uh... you- all you indivuals... the people who put together prom, AND my classmates, to contact me, Christian Weston Chandler... at 14 Branchland Court, Ruckersville Virginia, 22968, snail mail, or by telephone... at 434-990-0198. [pause] Again, that's 434-990-0198. [pause] False identities will be... discarded... so be sure yer... leave a message, describe- telling us your naaame, where you are right now and your contact information. Basically your phone number. I will not accept e-mail... contact. Which- Because of... because of the trolls of which brings up my next- my other topic which I would like to address as well.

Cyber-bullying and trolling. It's all not cool, cuz you're just basically.. mocking and... terrorizing... innocent people. It's not good. Not cool. Not cool. [pause] You don't want to... you don't want to be a bully, like those who picked on you... in any school, whether it- regardless of it was pre, kindergarten, high, middle, elementary, high... whatever. We've all had our bullies in real life... don't be a bully yourself.

[Chris holds up a hand drawn picture of a green-haired Devil Troll standing on in front of an unknown blue stripe, which is possibly a correction redrawing the red slash at an angle as it is typically rendered. The Devil Troll proudly displays a massive erection, with a red "forbidden" symbol (mostly) transposed over the top. The words "Cyber-bullying and trolling are not cool!" are displayed below. Even given the extremely low resolution of Chris's video, it is immediately obvious Chris mistakenly colored outside the lines in this picture.]

[Chris puts the paper down out of view. His attitude becomes sullen, forlorn.] It's not good. T'... leave it the way it is. We need to take these criminals down. [Chris taps on his yearbook with his knuckles] For what they are doing... ['Chris performs The Creepy Stare'] God... will smite them. He knows it- he knows you're doing it you damn trolls. And I know. I'm laughing at you right now. Oh hey! Here's a fun little joke. So-So I walk into a Burger King... and I says to the employee- to long haired female employee with the pink shirt... "Am I fat?" ... "No." [Chris brushes his imaginary long hair in an extremely effeminate gesture] ... "Chris is fat."

Not cool. [Pause. Chris points at the camera] You WILL be found in person. And I will give you a piece of my mind. Not phys- not physical violence. [pause] You trolls are going down. [Chris points down] And with the help of all good- with all the good people who agree with me... that trolling is not cool and would never dare to troll anybody, or bully anybody in real life, I urge you to report any suspicious people to your local police department. Or Crimestoppers. Also some tips- keep all your information... your personal information off of the Internet.

You do not want anybody to be laughing behind your back of something... that shou- should be remain private. And naked photos is no good either, definitely not, so keep all private information to yourselves.

[Chris makes a small punching movement nearly out of view of the camera.]

We're the Troll- we're the Trollbusters. And togetter, we will work WORLDWIDE [Chris makes a much more emphatic punch in clear view] to put a stop to bullying and cyber-bullying. [pause; Chris holds a 'thumbs up' gesture for some time] Yeah.

[Chris picks up the yearbook again.] Class 2000 reunion. It has to happen and I need the help of my classmates. And the people who put together the senior prom. [Chris's face is pleading] Call me. Snail mail me. Get in contact with me.

[Another, brief, thumbs up gesture]

Have a good day. Be safe.

[Chris turns off the camera.]