F Abstinance [sic] (officially "F Abstinance.MOV") is a video uploaded on to YouTube on 28 March 2010. Chris goes on a tirade about sexual abstinence for no other reason than having been an adult virgin with rage.

Similar to his views on the friend zone, he appears to cling viciously to the belief that he is owed sex merely because he exists. This video is also filled with irony, considering his Christian faith, once again proving that Chris knows nothing about Christianity - only parroting things he hears and agrees with while ignoring things that give him prickly-wicklies. It's likely that Chris believes the fear of pre-marital sex is the only thing keeping women from having sex with him, while ironically his excessive sexual eagerness and his needy behavior are what gets in his way. Chris also tells everyone to not buy any of the Sonichu books that Clyde has put on the internet because Chris is not getting paid for any of it. While he commands people not to buy any comics he goes on to say that "small things" such as toys and backpacks are okay.

Chris later removed this video, most likely at the request of Rocky Shoemaker. 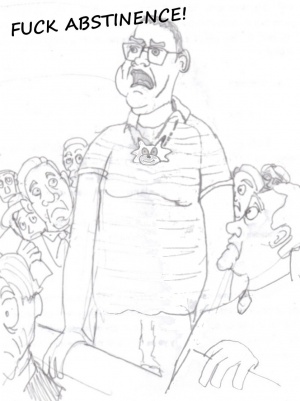 What Chris intends to do. 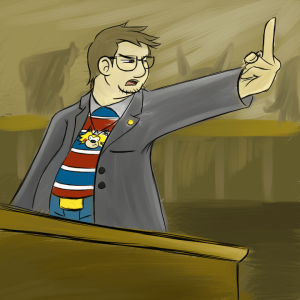 [Chris dramatically removes his glasses as the video begins.]

Abstinence, if you're just learning about it, abstinence is nothing but crap. It is a whole fucking bunch of baloney. If eh- if I had the opportunity, I would- if I was in an assembly, I would stand right up in my chair and I would say "FUCK UP- FUCK ABSTINENCE!"

[Chris thrusts his right index finger in the air for emphasis.]

Shout it right to the choir. I mean 'cause if you got abstinence, then what- then what do you get? End up being an adult virgin, or even worse, a senior citizen virgin and that is like a hell to most anybody. And you can tell 'em that I, Christian Weston Chandler, promotes you to say "FUCK ABSTINENCE!"

[Chris punctuates his shout with another fist-pump, then collects himself and puts on his glasses.]

Updates are to come on the CWCipedia soon and do not buy any of the quote unquote books anywhere on the Internet because I have not approved of any such books and I'm not getting a dim- and I'm not seeing a penny out of that. So if there's anything that I'm not seeing a penny out of, eh- books or DVDs, yeah do not buy. Otherwise would like, you know dolls, toys, backpacks wh- that sort of- that sort of small thing, yeah that's fine, that's okay. I'll approve that.

Anyway, everybody else, have a good day.