Wearing only his sports bra, Chris reads easily accessible information about autism that he got from Wikipedia and autismspeaks.org for about 7 minutes. He gives his advice regarding how to raise an autistic child, but Chris, as the autistic he is, doesn't realize that he can't be taken seriously if he is wearing a bra. Chris then begins his protest against other men walking around shirtless, stating that it should be illegal unless said man is wearing a bra.

Chris appearing in his bra is most likely an attempt to take the wind out of the trolls' sails after the horrors of the day before. Note the lack of the medallion, or the high school ring, and the fact that Chris can't explain autism with his own words and that he applies exactly none of the facts he mentions here to his life. And that he talked in a more monotone voice until he was talking about shirtless guys.

Good day. I’m here today on this, uh, pleasant day of April 2010 to, uh, discuss autism as it is Autism Awares- Awareness Month. What is Autism? [Reads off clipboard] “Autism is a disorder of neutro- of neurodevelopment characterized by impaired social interaction and communication, and by restricted and repetitive behavior. These signs all begin before a child is three years old. Autism affects information processing in the brain [Points to head], by altering how nerve cells and nerve synapses connect and organize; how this concerned [ed--a misreading of 'occurs' ] is not well understood.” And by where I got this information printed out here from, uh, autismspeaks.org and the Wikipedia page for autism.

[Deep breath] “Today, it is estimated that 1 in every 110 children is diagnosed with autism, making it more common than childhood cancer, juvenile diabetes, and pediatric AIDS combined. An estimated 1.5 million individuals in the United States and tens of millions worldwide are affected by autism. Studies suggest that boys are a lot more likely than girls to develop autism and receive the diagnosis three to four times more frequently. Current estimates are that in the United States alone, one out of 70 boys is diagnosed with autism."

"As for social symptoms, uh, from the start typically developing infants are social beings. Early in life, they gaze at people, turn toward voices, grasp a finger, and even smile. By contrast, most p-peop- most children with autism seem to have tremendous difficulty learning to engage in the give-and-take of everyday human interactions. Even in the first year of life, many do not interact and avoid eye contact in a nor- normal way. They may seem indifferent to other people, and prefer being alone. They may resist attention or passively accept hugs and cuddling. Children with autism also are slower in learning to interpret what others are thinking and feeling. Subtle social cues — such as a smile, a wave, or a grimace—may have little rema- little meaning to a child with autism. To a child who misses these cues, such things as 'Come here' may always means the same thing, whether the speaker is smiling and extending her arms for a hug or frowning and planting her fists on her hips. Without the ability to interpret ges-tures and facial expressions, the social world may seem bewildering. To compound the problem, people with autism have difficulty seeing things from other pearson's perspective."

[Turns page on clipboard] "Most 5-year-olds understand that other people have different thoughts, feelings, and goals when they have- than they have. A child with autism may lack such understanding. This inability leaves them unable to predict or understand other people's actions."

"Although not universal, it is common for people with autism to have difficulty regulating their emotions. This can take the form of ‘immature’ behavior such as crying in class or verbal outbursts that may seem inappropriate to those around them. Sometimes they may be disruptive and physically aggressive, making social relationships even more difficult. They have a tendency to 'lose control', particularly when they're in a strange or overwhelming environment, or when angry and frustrated."

"Communication. By age 3, most children have passed predictable milestones on the path to learning language; one of the earliest is babbling. Babbling. By the first birthday, a typical toddler says a word or two, turns and looks when he hears his name, points when he wants a toy, and when offered something distasteful, makes it clear that the answer is 'no'. [Scratches head] Some children diagnosed with autism remain mute throughout their lives, although the majority develop spoken language and all eventually learn to communicate in some way. Some infants who later show signs of autism coo and babble during the first few months of their life, but they stop. Others may be delayed, developing language as late as age 5 to 9. Some children may learn to use communication systems such as pictures or sign language, or closed captioning for the hearing impaired. Some speak only single words, while others repeat the same phrase over and over. They may repeat or parrot what they hear, a condition called e-cho-la-lia. Although many children with autism go through a stage where they repeat what they hear, it normally passes by the time they are- they are age 3. Another common difficulty is the inability to understand body language, tone of voice, or “phrases of speech.” For example, someone with autism might interpret a sarcastic expression such as “Oh, that's just great” as meaning it really is great."

"While it can be challenging for others to understand what children with autism are most able to say, their body language may also difficult to understand. Facial expressions, movements, and gestures may not match what they are saying. Also, their tone of voice might fail to reflect their feelings. They might use a high-pitched, sing-song, or flat, robot-like voice. Some children with relatively good language skills speak like little adults, [Turns page] failing to pick up on the kid's speak that is common in their peers. Without meaningful gestures, or the language to ask for things, people with autism are less able to let other know- others know what they are need. As a result, they may simply scream or grab for what they want until they are taught. Better ways to express their needs. Children with autism do whatever they can to get through to others. As they grow up, they can become increasingly aware of their difficulties in understanding others and being understood."

"Repetitive behaviors. Although children with autism usually appear physically normal, odd repetitive motions may set them apart from other children. These behaviors might be extreme and highly apparent, or more subtle. Some chi- some children and other individuals repeatedly flap their arms, or walk on their toes, some simply freeze in position. As children, individuals with autism might spend hours lining up their cars or trains in a certain way, rather than using them for pretend play. Someone moves one of the toys, the children m-may be tremendously upset. Many children with autism meed and demand absolute consistency in their environment. A slight change in routine, such as meal time, dressing, take a bath, or going to school at the same time or by a certain route can be extremely stressful. Unless the child has made apparent that the change is okay and acceptable. Repetitive behavior sometimes takes the form of a persistent intense preoccupation. These strong interests may be unusual, because their content, or because the intensity of the interest. Treatment for autism is very intensive, comprehensive undertaking that involves the child's entire family and a team of professionals. Some programs may take place in a child's home with professionals and a trained therapist and may include parental training for the child under supervision of a professional. Some programs are delivered in a specialized center, clu-sumes, or preschool." [Puts paper down] 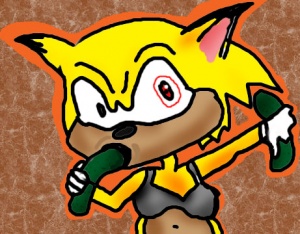 Sonichu, covering his shame in light of Chris's new legislation. 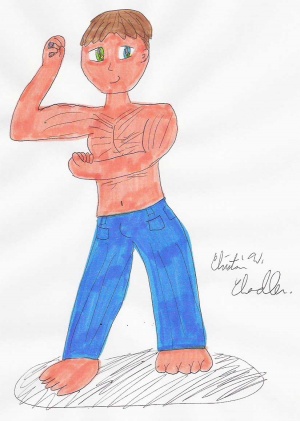 That would be all men, right?

Though, as for me though, I highly recommend mainstreaming, lettin' 'em go though normal life. I mean yeah, gib'em the special treatment while they're young but when you gottdem in elementary- but when you geddem in elementary or middle school... or high school, mainstream is the way to go. Make sure you find yourself a good social teacher teach dem how to cope! And as you may have noticed, I am standing here today... topless [Grabs bra and pushes it upwards], as you might say. I do this in defense, and in protest, because everytime I-because every time I see a (removes glasses dramatically) male individual who goes around or runs around or exercises shirtless, it is very offensive to me. And I do not appreciate that. And I am sure that it is a lot offens- it is offensive to a-a lot of other people as well. And a-madafra if I could, I would say that-I would make a LAW that would require all male individuals to wear a sports bra while they are out exercising or working if they insist on being shirtless! Come'oin dudes, get with the program! No one wants to see these nips! And things are better left a mystery! I leave you all with that, and you have yourself a pleasant, safe day.