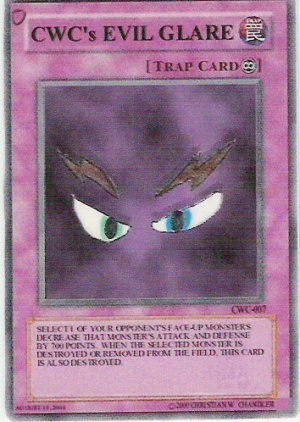 Chris seems to employ multiple stares, all trying to project a different emotion and all nearly identical to each other, à la Derek Zoolander. He has used them to display anger, frustration, romantic interest, or sometimes an intentional lack of emotion, almost like an autistic variant of a poker face. Like many of Chris's strange mannerisms, this is likely linked to his autism; autistics tend to have difficulty understanding and expressing the kind of non-verbal social cues that are second nature to most people.

Chris may think that his stare is a sexy and seductive gaze or an intimidating glare that will force his adversaries into submission, but to ordinary observers, it invariably comes across as creepy and/or out-of-place.