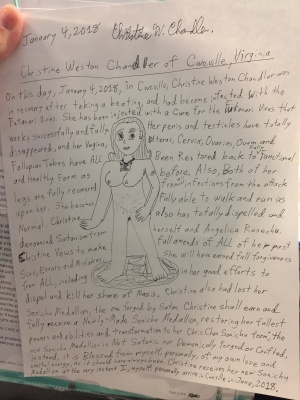 It's as horrifying as it seems.

On several occasions, nude photographs and screencaps showing Chris's uncovered or scantly covered body, often including his genitals, have leaked onto the Internet.

The first nudes were obtained by Lordsillynipples, a troll posing as Chris's off-and-on sweetheart Blanca Weiss. They hit the Internet on 11 September 2008 and were quickly followed by a second round of photos released five days later by trolls who hacked Chris's e-mail account. They included photos of a mostly-naked Chris standing around in his room, close-up shots of his flaccid duck with a crude cartoon of Sonichu on it, and the infamous photo of Chris posing in his mother's underwear.

In the first set of nudes, Chris was smart enough not to include his face in any of the pictures. However, he was foolish enough to take them in what was clearly his room, complete with a picture of Rosechu visible in the background.

Chris's blow-up doll sex tape, For Julie's Eyes Only, is perhaps the most famous exposure his body has ever received. It was leaked on 20 February 2009. It came close to being equaled on 16 April 2009, however, when Chris recorded a series of videos for his new sweetheart Ivy where (among other things) he stripped naked, danced in his shower, and spanked himself on camera.

After the CWCFlyingElephants video, leaked on 27 April 2009, Chris's naked body did not reappear on the internet for nearly two years. Unfortunately, it did not leave us for good. He showed off his duck once again (to what he believed was a limited audience) in the Cwcsicle clip, leaked in March 2011, and more bare flesh followed a month later in the Tomgirl Pictures.

Meanwhile, potential sweetheart Jackie persuaded Chris to make two more NSFW videos. In Little Tomboy Blue, Chris performs a striptease, showing his cleavage and jiggling his ass. And in what might be his most disgusting video (although the competition is stiff), Cakefarts features his chocolate-covered butt and semi-erect duck, with the bend apparent. Both videos were apparently produced in July 2011 and released to a rapturous public in February 2012, on Chris's birthday.

On many occasions, Chris has drawn crude images depicting himself, his friends, or characters from his comic without clothes on, often engaging in sexual acts. For more information on these images, see Sonichu and Rosechu's Luv Shack. Read and weep at your own risk.