Sarah Cassandra Cash (née McKenzie; nicknamed "PandaHalo" and "Sarah-Heart") was Chris's TRUE and HONEST sweetheart in 2008-09 who lived in southern Australia before her "fiery death". 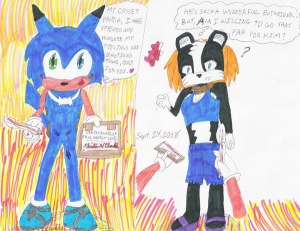 During the Blanca Saga, PandaHalo continued to send occasional messages to Chris. After Chris realized his mistake in believing in Blanca, he decided to declare his TRUE and HONEST love for Panda on September 24, 2008, through a Sonichu drawing.[4]

Panda toyed with Chris for a while, discovering how desperate he was for sex. Panda really pushed the limits of acceptable behavior, and their conversations show just how gullible Chris can be when china is on the line. A good example is how she verbally abuses Chris while claiming that she's starting to fall in love with Robert Simmons V, occasionally typing extremely obvious and specific insults to Chris and easily passing it off as some kind of bizarre form of Tourette's syndrome, or easily getting Chris to agree to bizarre sex acts, such as convincing him to have sex with a dog for her pleasure (for the record, he said he'd be willing to have sex with a collie, like Lassie)[5]. She managed to obtain the first footage of Chris masturbating and audio of Chris talking about his sexual opinions. He also sent Panda a PSP that was originally intended for Megan. She purported to be a conservative Catholic, challenging Chris' views on premarital sex. He countered that his pastor had said it was permissable, apparently considering the fact that Panda subscribed to a vastly different theology completely invalid.

In a disturbing act of revenge, Clyde Cash flew to Australia and raped Panda.[6] She fell pregnant with Clyde's child, a fact which didn't appear to faze Chris in the slightest. Clyde immediately and generously offered to take care of Panda and their baby in his mansion, whereas Chris "subtly" pressured Panda into getting an abortion. As Chris was in the middle of lecturing Clyde about forgiveness, he was in an unusually forgiving mood, and actively encouraged Panda to abandon her child to the man who'd raped her so Panda could live with Chris in his parents' house. While Clyde offered to house not only Panda and their child, but Chris as well, his stipulation that Chris would have to get a job nixed that idea. There was also the issue that Clyde's act of rape had gotten Panda addicted to sex (which, as a man who has learned everything he knows about sex from porn, Chris didn't at all question), and she expressed some interest in regular threesomes with Chris and Clyde. In the end, Panda gave Chris an ultimatum: talk to Nintendo to make Sonichu a reality so that Chris could support their future family together, and she would gladly abort Clyde's baby and live with him as his sex-addicted, baby-spewing wife. Failure to do so meant she would live with Clyde in his mansion and raise their child together. Chris, of course, wouldn't put in the effort to get the only two things he had ever truly cared about, and forfeited Panda to Clyde. Shortly after, however, he heard about the Australian bushfires...

Panda seemingly ceased to exist when Chris failed to meet her ultimatum, and Chris convinced himself that PandaHalo was one of the 173 people who died in the Black Saturday bushfires of February 2009,[7] but whether this is true or not shall remain a mystery forever. Chris's less-than-stellar knowledge of foreign geography meant that the fact that the fires occurred about a thousand kilometres from where Panda lived did little to inform his theory of her demise.

In Sonichu #9, the fictional version of PandaHalo met her demise. After her building is "put ablaze," she hurls her Poké Balls out the window to save her Electric Hedgehog Pokémon, Chloe Rosechu and Blazebob Sonichu. After approximately fifteen seconds of mourning, Blazebob reassures Chloe that they need to move on, mirroring Chris's lack of grief after the real Panda's untimely death.

It only took a year for him to get around to it, but Chris finally obtained some manner of revenge against Clyde Cash for the rape of PandaHalo in a YouTube video. Granted, it was a complete fantasy...but then, so are all of Chris's victories.

In an April 2010 update to the CWCipedia, Chris published a page discussing the women he's known in his life, including Panda. There, he revealed that he no longer believed she was dead. Instead:

In released e-mails, Chris wrote that Clyde had told him that Panda had died, and that this had been a lie meant to get Chris away from her. In return, Chris sought to give Panda the PSN accounts he had made for her and held onto for over a year in exchange for proof of this.