Kellie Andes was Chris's crush in high school that he met in sophomore year. They lost contact in mid-2001.[3] Today, Chris thinks he had a chance with her but blew it due to naïveté.[4] Chris calls her his High School Sweetheart, despite the fact that the term is usually reserved for people that are officially dating.

Kellie was Chris's lab partner in chemistry class at Manchester High, along with Sarah Anne Bevel. Chris developed a crush on her in his sophomore year. She was apparently friendly enough with Chris to attend his 18th birthday party, where she gave him a jawbreaker.

Unlike most of his gal-pals, Chris managed to keep in touch with Kellie for some time after graduation. He gave her a personalized CD for Christmas 2000. He claims to have called her every weekend for about a year to a year and a half. Then he stopped. He has told contradictory stories about why. In notes he made for his DVD in 2007, he said that the cause was noviophobia: "I was afraid that you [Kellie] may have moved on to someone who you may have called your sweetheart."[5] In 2009, however, he told Kacey that one week, he just forgot to call Kellie, and, having broken the routine, never resumed.[6] Even more confusing, while his May 2009 Wikipedia profile indicated that he believed that he could have gotten some from Kellie if he just hadn't been so damn shy, a few months later he told Kacey that his mother had informed him back in 2001 that Kellie obviously had a boyfriend at seinor prom, and that his weekly phone calls were in vain. In 2014, he changed his story again to make himself seem less clueless, implying that he had figured out for himself around graduation (not a year later) that Kellie was dating someone.[7]

His mother's eye-opener in 2001 that Kellie had been someone else's sweetheart all along was a "shock" to Chris that lasted for several weeks. It broke his last remaining tie to his high school life. It obviously contributed to his sense of loneliness and self-doubt.

Chris never had a chance with Kellie under any scenario. In 2010 correspondence, Kellie confirmed that Chris was definitely not her type.

Throughout 2013, as Chris planned the fifteenth annual Manchester High School reunion, he fantasized about hanging out with Kellie, but in reality she wanted nothing to do with him. In December 2013, Kellie discovered Chris's antics since high school and provided some telling commentary. She shared a link on her Facebook page for Chris's For J-R's Eyes Only.MOV video with the comment, "OMG guys it gets WORSE! I threw up a little in my mouth after watching this. If you have a weak stomach, turn back now."[8] Chris admitted in 2014 that Kellie had blocked him on Facebook a few years earlier.

In February 2021, Bella allegedly impersonated Kellie in a set of e-mails to Chris (misspelling her name as Kelly), which Chris responded to.[9] 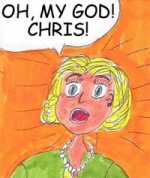 Kellie appears in the last page of Episode 15 of the comic as someone who discovers Chris's nudes. In Episode 17, Rosechu mentions Kellie as the one who informed her about 4-cent_garbage. In reality, Chris admits that he only gave Kellie the honor of discovering the ED page in the comic.[10] It's highly unlikely she did in real life.

Some argue that she is also the inspiration for Kel's name. In Sonichu #10 Kel is actually referred to as "Kellie"; while it's still possible they're not meant to be the same person (especially considering the appearance of "real" Kellie in episode 15), the spelling at least reinforces the idea that Kel is meant to be some version of Kellie. The fact that Kel is in love with Reldnahc (who is essentially a Freudian version of Chris) is telling of Christian's obsession with his high school years.