A Week With Christian Chandler

"A Week With Christian W. Chandler (A Self-Documentary)", more commonly known as "A Week With Christian Chandler", was a school report that Chris wrote to document one week in his high school life. The week documented was 29 April through 5 May 2000, when Chris was 18 (although Chris gave the report a copyright date of 24 April 2000). Many events were covered during these seven short days, but the most significant among them must be the creation of the cover for Christian's Favorite Hits!, on which Sonichu made his first-ever appearance.

The information contained within Chris's report provides valuable insight into his early years, chronicling the development of some of his current hobbies and habits. As just one example, he openly admits to falling asleep during his classes on a regular basis, foreshadowing his future inactivity and overall laziness post-college. Chris seems to have been enrolled in basic behavioral-adjustment classes, including a "coping class/study hall", but he evidently spent all of his time in these classes reading R.L. Stine books instead of paying attention. Also, Chris refers to some of the other students on his school bus as "slow-in-the-minds".

This account of his high school days is nowhere near as idyllic as he would later portray them to be, suggesting that he has romanticized them.

Reproduction of the Official and Original Text 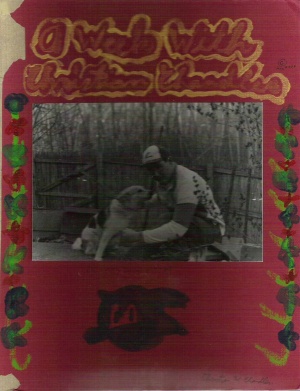 A Week With Christian Chandler

[Photo: Chris, dressed as Ash Ketchum, poses with the now-deceased Patti Chandler. Out of focus and the print is overexposed.]

[Drawing: A crude portrait of Sonic the Hedgehog faces left.] 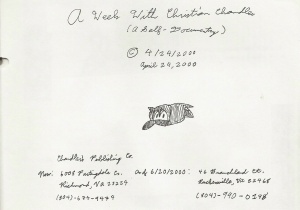 A Week With Christian Chandler
(A Self-Documentry)

[Drawing: A crude portrait of Sonic the Hedgehog with an oddly semitic nose faces left] 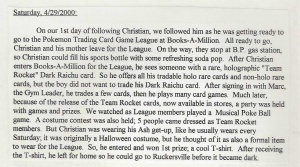 On our 1st day of following Christian, we followed him as he was getting ready to go to the Pokémon Trading Card Game League at Books-A-Million. All ready to go, Christian and his mother leave for the League. On the way, they stop at B.P. gas station, so Christian could fill his sports bottle with some refreshing soda pop. After Christian enters Books-A-Million for the League, he sees someone with a rare, holographic "Team Rocket" Dark Raichu card. So he offers all his tradable holo rare cards and non-holo rare cards, but the boy did not want to trade his Dark Raichu card. After signing in with Marc, the Gym Leader, he trades a few cards, then he plays many card games. Much later, because of the release of the Team Rocket cards, now available in stores, a party was held with games and prizes. We watched as League members played a Musical Poke Ball game. A costume contest was also held; 5 people came dressed as Team Rocket members. But Christian was wearing his Ash get-up, like he usually wears every Saturday; it was originally a Halloween costume, but he thought of it as also a formal item to wear for the League. So, he entered and won 1st prize, a cool T-shirt. After receiving the T-shirt, he left for home so he could get to Ruckersville before dark. 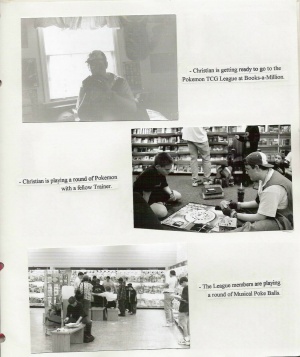 [Photo: Chris, seated on his bed, holds up a number of Pokémon trading cards. Chris is shot against the light. The print is underexposed.]

- Christian is getting ready to go to the Pokemon TCG League at Books-a-Million.

[Photo: Chris stares down a younger opponent, about to put his last card into play.]

- Christian is playing a round of Pokemon with a fellow Trainer.

- The League members are playing a round of Musical Poke Balls.

On the 2nd day, Christian woke in his country home in Ruckersville. He helped his mother by moving heavy and light boxes, furniture and stuff from the van to the house, and house to workshop. Afterwards, they loaded the van, got ready to leave and left for Richmond. On the way, they stopped at Country Cooking restaurant in Orange County for lunch. Later, they returned to Richmond, and re-unloaded their van. But, even though they worked hard today, putting and taking, there is still a lot to move back to Ruckersville. 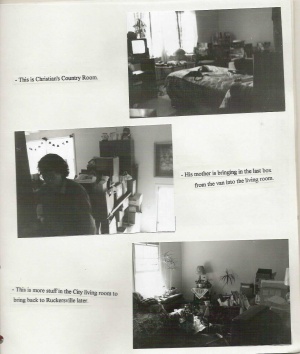 [Photo: Chris's bedroom appears cluttered, yet cleaner than it's been ever since. Insufficient contrast and out of focus.]

- This is Christian's Country Room.

- His mother is bringing in the last box from the van into the living room.

- This is more stuff in the City living room to bring back to Ruckersville later.

On the 3rd day, Christian spent an "ODD Day" at Manchester High School. The 1st class he went to was his English class with Mr. Goss. During class, Mr. Goss discussed the difference between Shakesphere's world and the real world of today. Christian rested his eyes after Mr. Goss's discussion, and before the bell rang. Next, he had Trigonometry...I'd hate to be Christian when his nerves kicked into action after waking up from a "notey" snooze cruise, but I was. Next was Computer Graphics...it was great for him today, because he got to print his own CD cover. Next was Spanish 2...he took a quiz today, but I think he feels confident in his work. And finally, after a hard "odd" day, he rides home on a bus, but unfortunately, it had a few "slow-in-the-minds" on it. 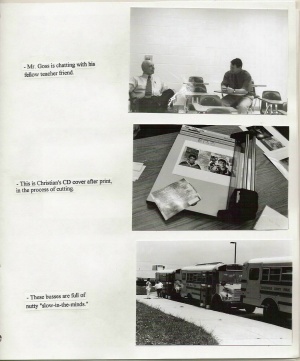 [Photo: Two teachers are sitting in a classroom, having a chat. Chemical smudge and fingerprint in print, likely a result of putting a dirty photographic paper on enlarger.]

- Mr. Goss is chatting with his fellow teacher friend.

[Photo: The cover of Christian's Favorite Hits! has just been printed.]

- This is Christian's CD cover after print, in the process of cutting.

- These busses are full of nutty "slow-in-the-minds."

On the 4th day, we follow Christian on an easier school day, an "Even Day." 1st, he went to English class...he cruised on a "Zzzz," while starting to read a "Dollhouse" story. 2nd was Photography class, but with the immature boys, and getting up to develop photos, he never falls asleep in that class. 4th was Contemporary Living. Today, Mrs. Tortorella talked about eggs and microwaves, and from the eggs, I'm hungry. Which brings up lunch; on an odd day, Christian eats alone, but on even days, he is with friends: Tiffany, Sarah, and Brian. Brian was not there today; he went on a field trip to D.C. 6th was Coping/Study Hall. During the free time in this class, Christian likes to get into a good book. And at 1:30, our hero leaves for home on...that bus. 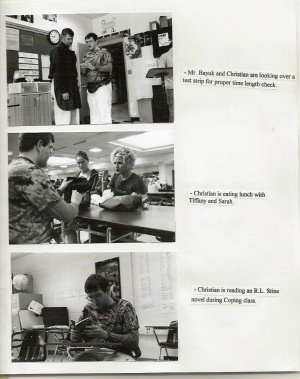 [Photo: Chris discusses a class assignment with one of his teachers.]

- Mr. Bayuk and Christian are looking over a test strip for proper time length check.

[Photo: Chris is eating lunch with two of his best gal-pals.]

- Christian is eating lunch with Tiffany and Sarah.

[Photo: Chris has his nose in the spine of R.L. Stine's In Too Deep.]

- Christian is reading an R.L. Stine novel during Coping class. 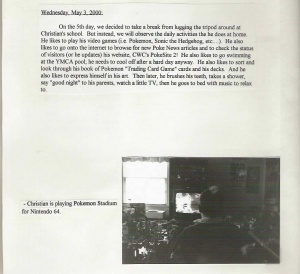 On the 5th day, we decided to take a break from lugging the tripod around at Christian's school. But instead, we will observe the daily activities the he does at home. He likes to play his video games (i.e. Pokemon [sic], Sonic the Hedgehog, etc....). He also likes to go onto the internet to browse for new Poke News articles and to check the status of visitors (or he updates) his website, CWC's PokeSite 2! He also likes to go swimming at the YMCA pool; he needs to cool off after a hard day anyway. He also likes to sort and look through his book of Pokemon "Trading Card Game" cards and his decks. And he also likes to express himself in his art. Then later, he brushes his teeth, takes a shower, say [sic] "good night" to his parents, watch a little TV, then he goes to bed with music to relax to. 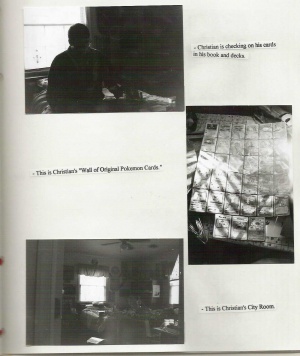 [Photo: Chris is sitting on his bed, looking over his Pokémon cards. Shot against light.]

- Christian is checking on his cards in his book and decks.

[Photo: The Wall of Originals, only 1/4 complete, is already huge.]

- This is Christian's "Wall of Original Pokemon Cards."

- This is Christian's City Room.

On the 6th day, we followed Christian, and photographed the achievements of Christian and his friends. 1st, we noticed on the wall of the Cafeteria hallway were posters from Computer Graphics classes; one was his, and we photographed it. Next, in Christian's Contemporary Living class, he, Tiffany and Sarah were fixing filled pasta shells, garlic bread and a salad. Christian did not have any salad; lettuce or tomatoes (and a few other vegetables) alone makes him feel green in the face. But After the bread and pasta shells were done (Christian and Sarah made the shells together) they all enjoyed a little something Italian. And during Photography class, he mounted a photo of his mother (he took and developed it himself) and later colored it. 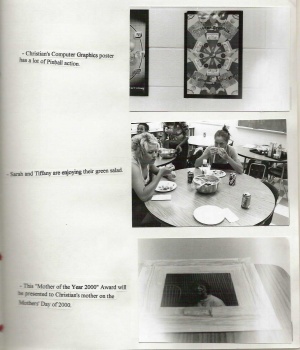 [Photo: Chris's "busy" Computer Graphics poster reads "Computer Graphics... Make some neat-o stuff!" and has "CWC" slapped six times all over it. The right edge of the print is overexposed, though this is barely noticeable.]

- Christian's Computer Graphics poster has a lot of Pinball action.

[Photo: Two of Chris's best gal-pals are eating the salad that they made.]

- Sarah and Tiffany are enjoying their green salad.

[Photo: A photo of Barbara Chandler has been set in a cheap homemade frame. Corner and - in a failure so grand that it's reserved for professionals alone - a band in right side of the print is overexposed. How Chris achieved this, we'll never know.] 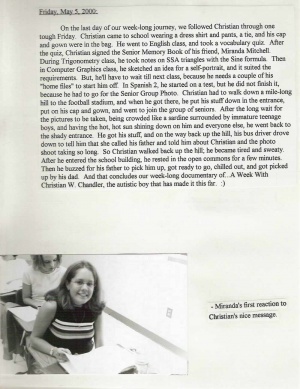 On the last day of our week-long journey, we followed Christian through one tough Friday. Christian came to school wearing a dress shirt and pants, a tie, and his cap and gown were in the bag. He went to English class, and took a vocabulary quiz. After the quiz, Christian signed the Senior Memory Book of his friend, Miranda Mitchell. During Trigonometry class, he took notes on SSA triangles and the Sine formula. Then in Computer Graphics class, he sketched an idea for a self portrait, and it suited the requirements. But, he'll have to wait till next class, because he needs a couple of his "home files" to start him off. In Spanish 2, he started on a test, but he did not finish it, because he had to go for the Senior Group Photo. Christian had to walk down a mile-long hill to the football stadium, and when he got there, he put his stuff down in the entrance, put on his cap and gown, and went to join the group of seniors. After the long wait for the pictures to be taken, being crowded like a sardine surrounded by immature teenage boys, and having the hot, hot sun shining down on him and everyone else, he went back to the shady entrance. He got his stuff, and on the way back up the hill, his bus driver drove down to tell him that she called his father and told him about Christian and the photo shoot taking so long. So Christian walked back up the hill, he became tired and sweaty. After he entered the school building, he rested in the open commons for a few minutes. Then he buzzed for his father to pick him up, got ready to go, chilled out, and got picked up by his dad. And that concludes our week-long documentary of...A Week With Christian W. Chandler, the autistic boy that has made it this far. :)

[Photo: Miranda is seated at a desk. Out of focus.] 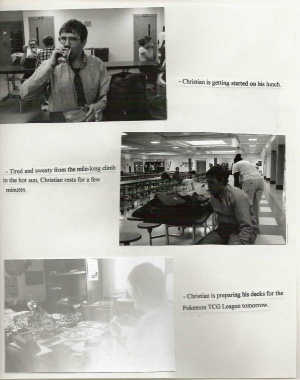 [Photo: Chris is sipping from a can of Dr. Pepper.]

- Christian is getting started on his lunch.

[Photo: Chris is sitting at a long table, looking exhausted. Somewhat badly lit, as Chris's face is in shadow.]

- Tired and sweaty from the mile-long climb in the hot sun, Christian rests for a few minutes.

- Christian is preparing his decks for the Pokemon TCG League tomorrow.

A Week With Christian W. Chandler (A Self-Documentary). 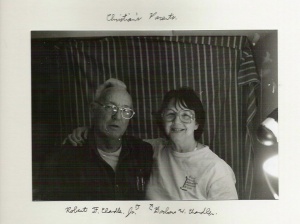