A Sonichu and Rosechu Christmas Story 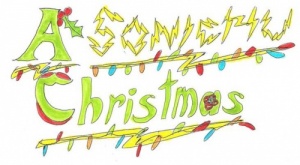 "A Sonichu and Rosechu Christmas Story" is a Christmas-themed stream-of-consciousness short story that Chris started in the late evening of 13 December 2009. It appears that Chris characteristically began writing without any clear idea of what the overall story was, which led to stress and Chris giving up halfway through - proof that even when using an old, traditional template, Chris will still struggle.

As of this current time, the project remains unfinished, presumably forgotten.

Sonichu #11 would serve as a remake/completion of the story.

It is December 2008 in CWCville. The thoughts of CWCville's citizens have turned to shopping, "Santa Clause", and religion, in that order. The churches are full of Christians, and for some reason Jews and Buddhists have also apparently gathered in the churches to celebrate. Chris nonchalantly notes that CWCville has so many homeless people that it requires ten homeless shelters/soup kitchens.

Sonichu and Rosechu, able-bodied adults who do not work, prepare to lavish expensive gifts on their children in their state-appointed housing while across town the apparent throngs of destitute homeless people huddle for warmth in overcrowded flophouses (Chris calls them "Soup Hotels!"). Chris evidently believes toddlers can do a lot, as Cera, Christine and Robbie hang stockings, butcher a classic Christmas poem (somehow in song form - the proper melody only exists in Chris's head), rehearse for the overtly Christian school play, and help bake cookies. At least one of them is in elementary school despite Cera, the eldest, being two years old. Chris seems to have forgotten their ages.

Robbie and Sonichu have a lengthy conversation about toys and video games. Most of the conversation is centered around why Sonichu doesn't get more presents. Chris adds a note suggesting, apropos of nothing, that the wireless PS3 controller should have some kind of special strap, so he could lash the controller to his feeble, sweaty hands without having to worry about dropping it.

Staying in the kitchen, Rosechu and Cera bake cookies for their Christmas party, which will occur in nine days. Cera has baked a single "candle-shaped" cookie for the token Jew she invited to the party. Cera tells Rosechu that she made him a vanilla cookie, so he wouldn't fall prey to some Jew food allergy from eating a peanut butter or chocolate cookie. It is unclear whether the children are allotted one cookie each, or Kevin (the Jewish character) is only given one cookie as some kind of punishment for not believing in the divinity of Jesus. Rosechu high-fives Cera for her deranged attempt at being culturally sensitive. This the end of the extant story, and it is unlikely ever to be finished.

"A Sonichu and Rosechu Christmas"

A Sonichu and Rosechu Christmas

It is December 12, 2008, in the City of Cwcville, Virginia. The majority of the citizens of Cwcville are full of the Christmas Cheer and Holiday Joy. Carolers are singing in various parts of the city. There's a Santa Clause in the middle of the Shopping Mall. The Biggest, Greatly Decorated Christmas Tree occupies the center of CWC-Central Park. All the churches are full with all the believers, be they Christians, Jewish folk, Buddhists, and such. Christmas Trees (mostly) and Menorahs light up most every house, apartment, store and all the living spaces. Even the homeless have a place to stay in the ten Soup Kitchens/Hotels. Although there tend to be one or two humbugged individuals within each group of people.

On this jolly day, we focus on the little house on 14 Brunchville Lane, where we see the Sonichu Family putting the finishing touches on decorating their house. Mama Rosechu and Cera are baking Christmas Cookies of fun and various shapes of Chocolate Chip, Peanut Butter and even Gingerbread. Christine is in her bedroom, rehearsing and trying on her Mary Outfit for the Christmas Play at the AnneWeston Elementary School. Robbie and Papa Sonichu, with their fully-decorated Christmas Tree behind them, are putting up the Stockings by the fireplace in the Rec Room.

Robbie had just hung his stocking up, between Cera's and Christine's stockings, when he chimes in singing happily, "And the stockings were hung by the chimney with care; we three children knowing Santa would soon be there." Sonichu smiles for Robbie, kneels down for eye-contact, then asks him, "Hey, partner, what do you think Santa will fill your stocking with?" Robbie thinks for a few seconds and replies, "I snail-mailed him a letter asking to put some candy in it, and maybe a copy of the new Wii Olympic game featuring Uncle Sonic. OOH! And I asked Santa to put the big Lego Police Station Set under the tree for me, along with what he will bring for Cera, Christine and you and Mama." Robbie smiles. Sonichu replies, "I don't know about me and Mama; Santa usually brings more for the children." Robbie's smile quickly fades and he asks, "Why does Santa bring less for the grown-ups?" "Well, Santa understands that adults like me and Mama require less," Sonichu replies, "and besides which, we usually treat each other on the presents." Robbie replies, "But Cera, Christine and I chip in for you and Mama too." "Yes y'all do," Sonichu replies, "on Christmas, as well as the other 364 days in your own cute ways; a smile, drawings, and the time we share together as a family." Robbie thinks on that for a moment, and he remembers his drawings of sailboats, Papa Sonichu winning a Wrestler's Belt in the match and the family gathered together. He also remembers the games of catching the football, running training around the yard, even High Velocity Bowling on the Playstation 3 (with a custom-fitted Wii wrist-strap attached to the Dualshock 3 Controller. I.M.H.O., ALL wireless controllers should be made with the accessory hole for the wrist straps). After all that remembering, Robbie replies with a smile, "Yes we do."

Meanwhile, in the Kitchen, Rosechu and Cera have almost finished baking all the cookies for the upcoming Christmas Party. Cera looks at some of the cookies and smells their goodness. Rosechu looks over her shoulder from the sink, almost empty of the dirty cooking tools that were to be cleaned, because most of them were already cleaned and washed, and tells Cera, "They smell really good, huh?" Cera replies, "Yes, Mama. Delicious," with a few crumbs hanging from her lips, because she ate one peanut butter cookie. The oven bell dings as the last batch of cookies are done. Rosechu washes her hands, dries them, then switches the oven off and opens the oven with an oven mitt on her right hand. and pulls the tray of cookies out. The smell of warm gingerbread refills the air. Cera wipes off her mouth with a napkin from the table, and fetches a fresh, clean spatula from the clean countertop and hands it to Rosechu. The cookies are gently lifted from the tray then are stacked onto a clean plate to cool. Cera exclaims, "I am looking forward to the party, mama. I am happy you allowed our friends from school to come too." Rosechu replies, "That's okay, sweetie." Cera continues with a question, holding a cookie in a zip-loc bag, "I've invited Kevin too; do you think he'll like this candle-shaped cookie I made for him? He told me he was Jewish, and I thought it would be appropriate." Rosechu replies, "I think he'll love it. You have made it really special with the white frosting for the wax and the yellow for the flame. Uh, what kind of cookie was it again?" "Vanilla", replies Cera, "I felt it best to keep it neutral, in case he was allergic to the peanut butter or chocolate." "Very Smart," says Rosechu with a smile, exchanging a high-five with Cera. The two put all the cookies into multiple zip-loc bags to be saved for the party on the 21st.

For Truth and Honesty, see the archived CWCipedia page on A Sonichu and Rosechu Christmas Story
Retrieved from "http://sonichu.com/w/index.php?title=A_Sonichu_and_Rosechu_Christmas_Story&oldid=266705"
Categories:
Hidden category: