How the Pokémon Came into Our PokéBalls 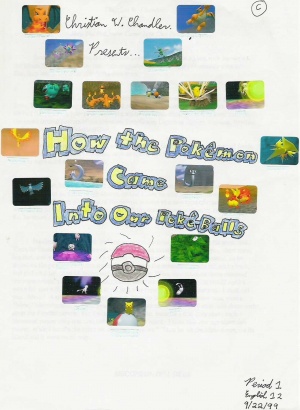 Cover page of the original assignment. Note the English class.

"How the Pokémon came into Our PokéBalls" is a short story by Chris done in his senior year of high school. In it, he attempts to establish some form of creation-myth for the Pokémon universe. Coincidentally, there is an official one now.[1] Also, the title itself is erroneous, as the story only explains how Pokémon came to be; it mentions absolutely nothing about PokéBalls.

Apparently, this assignment pleased Chris's teacher. How it got a good grade is a mystery lost to time. 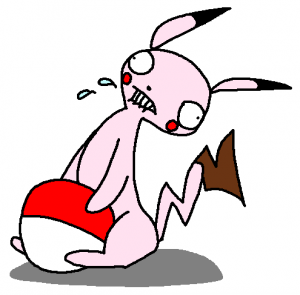 For my English class in late September of this year, I had to write my own myth. So, I figured "Why not make a myth about how Pokémon came to be."

My English teacher thought that it was a great story. So did my mom and a few other people. Since it was so good, I thought I'd feature it on this website. Click Here to read my story. Enjoy. :)

9/22/99 Page 1. Some people say that the Pokémon came from the sky in a giant rock known as the Moon Stone. Others say that they originated from the depths of nature's elements. But, they are all not true... this is the true story.

A long, long time ago in the heavens above, there were such powerful gods as Zeus, Maheo, and many more. But, it all started with a rookie god, known as...Mewchu. He had thepower to help provide for the animals, plants, minerals, and to keep track of the seven natural powers of the universe: Fire, Grass, Lightning, Water, Fighting, Psychic, and the power of the Colorless Star.[2]

Mewchu made sure that the animals and plants were fed from natures natures good foods. He made sure that nature's minerals, such as rocks, dirt from the ground, and the mucky messes were used for their purpose.

One day, Mewchu said to himself, "There must be a way to allow the animals, small and big, to do these tough chores, so that I may be able to be a little clean." Then, he thought, "Why not give some of the natural powers to a new type of creature." So, he went down to earth with the power to absorb the natural powers of earth, and share it. So, he stood... in the middle of the Pacific, surrounded by islands of seven and water.

He decided to start with making a powerful animal to assist him in his great task. Then, he found a weird creature on an island. It was mostly white, blue eyes, short arms, big feet, and a long tail with a pink fpsy tip. Mewchu has never seen such an animal, so he absorbed the power of Psychic from the stars, gave the creature a gentle rub on its back, and picked it up. And Mewchu said to the creature, "You, rare creature, have received the supernatural power of the Psychics from the stars above us. But you would need a name for you will be my assistant to make a new type of elemental creatures. I shall call you...Mew." And the Mew jumped for joy, then set him down with some wise words. "Mew," Mewchu said, "I want you to pick some animals that are here now, and share with them the Psychic power. For I would not be able to, because I may only share each elemental power only one time for one creature or more. I trust that you can share this power, while I handle the other six elemental powers." Then he set the Mew down, on its island and it went on its way. 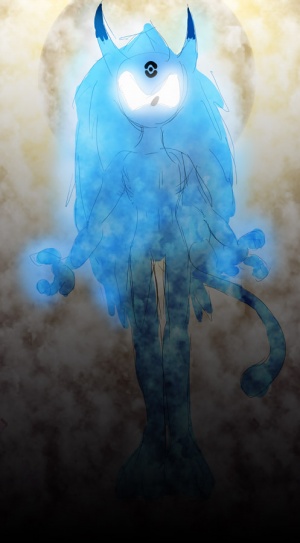 True and Original Creator of all Pokémon, DO NOT STEAL!.

Mewchu decided to start with the power of grass, so he rubbed the grass of another island's ground, and he waved his hand over the trees. A triceratops began to lose its horns, and it turned into a creature called Bulbasaur. A caterpillar lost its fuzz; it grew a little bigger; it turned green, and it got the name of Caterpie. Another caterpillar's fur only shortened; it grew a small horn; it grew a little, like the Caterpie did; it turned orange, and it became a Weedle. A rattlesnake turned purple, and grew a single yellow stripe; it became an Ekans. A rat grew small horns, turned blue, and became a Nidoran (female). And, another rat grew bigger horns, turned pink, and became a Nidoran (male). A bat's legs turned to two tails as thin as a blade of grass, its ears grew bigger, and it became a Zubat. A tiny bush sprouted out of the ground, grew eyes,and became an Oddish. A fuzzy bush grew two teeth like a vampire; it became a Venonat. A bell-shaped palm shrunk; it became a Bellsprout. A mud puddle grew into a Grimer. Six eggs bounced and said, "Exeggcute." A puff of smoke became solid, and mentioned, "Koffing." A bunch of vines gathered around another Oddish, it was Tangela. A dragonfly grew, and said, "Scyther." The rocks got a body of armor, and said, "Pinser."

Then Mewchu dipped his hand into the firey volcano of another island, pulled it out, and waved his hand over the volcano. Many animals were below. A baby tyrannosaurus got fire on its tail, and yelled, "Charrrrmander!" A fox's tail split into six. Maybe, it's now a Vulpix. A dog turned orange, and growled, "Growwwllithe!" A pony got burned, and neighed. A chunk of ash was revived and turned into a Magmar. And, a big bird flew out the volcano, it was a Moltres.

Mewchu then dipped his hand in the ocean's waters, and gave another wave over another island with a big lake in the middle. A baby turtle and a squirrel on an island joined together to make a Squirtle. A fat duck turned yellow with a headache; it became a Psyduck. A tadpole got bigger with a swirl on its belly, a Poliwag came to be. A jellyfish's arms shrunk into two. It was then a Tentacool. A Slowpoke was formed when a baby hippopotamus grew a tail. A seal turned white, and grew a horn on its head; it was Seel. A shell opened up, and stuck out a tongue, hello Shellder. A Krabby came when a crab got crowned. A seahorse started to spit oil, a fish grew a horn on its head, and starfish grew a jewel. Here were a Horsea, a Goldeen, and a Staryu. A crown from a treasure grew onto a hard-shell fish; here was a Magikarp. A rare lochness monster grew a spiked shell on its back; it became a Lapras. A fossil was revived; it was an Omanyte. Out of an arctic ice berg, an Articuno broke out.

Meanwhile, Mew shared its Psychic power with a Psyduck, and a Slowpoke. When Mew shared it with a rat, it fell asleep, and grew into an Abra. When Mew came across the body of a dead lizard, it summoned its spirit, and shared some "Gastly" secrets with it. Later, Mew met an anteater; Mew put it to sleep, and the anteater became a Drowzee. Mew found two monkeys, with an evolution. One turned into a Mr. Mime, and the other became a Jynx. Later in the night, Mew gave birth, and the baby Mew looked different. The new Mew gave its mother a psychic attack, and thrown it up a tree. Suddenly, the new Mew grew to the size that of a man with many years, It was a Mewtwo.

Meanwhile, Mewchu found a barren island with sand and rocks. He punched it, and out of the ground came the fighting and ground type creatures: Sandshrew, Diglett, Mankey, Machop, Geodude, Onix, Cubone, Hitmonlee, Hitmonchan, Rhyhorn, and a Kabuto.

Then Mewchu summoned a thunderstorm, and lightning struck another island. The lightning hit a little mouse, and the mouse grew into a Pikachu. Metallic minerals rose out of the ground of a small area of the island, and it formed to make a Magnemite. A coconut was struck with a piece of the metallic material carrying some of the electric power; the coconut turned metallic; it became a Voltorb. A wild cat was struck, and it became an Electabuzz. And out of the thunderous clouds came a Zapdos.

And finally, Mewchu planted a transparent star in the middle of the other island. And from the star came the Colorless creatures: Pidgey, Rattata, Spearow, Clefairy, Jigglypuff, Meowth, Farfetch'd, Doduo, Lickitung, Chansey, Tauros, Eevee, Porygon, and Dratini. Before Mewchu bid farewell, he waved his hand over all seven islands, and most of the creatures evolved into more powerful creatures. And, then He shouted out, "May these creatures be helpful to the earth, and may they use their abilities wisely." Then, he said with a tear of joy, "Farewell,... Pokémon." And Mewchu flew back into the heavens.