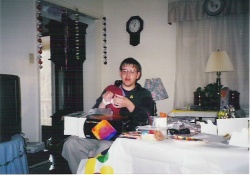 It was simpler times for Chris back when he was 18 - five young, attractive women were in his house, and he was more interested in a Dreamcast he got.

My Big 18th Party was a short text Christian wrote about his birthday in 2000. It was written on 10 February 2003, and published the next year, in the third issue of Sonichu's News Dash.

The story depicts what is perhaps the high point of his life, so much so that he still wrote about it 3 years later. This was one of the few times Chris ever interacted with his gal pals outside of school hours.[1] Ironically, possibly because of his shyness, Chris opted to sit alone away from everybody else, as evidenced by the photos taken, which don't even depict him together with his gal-pals once, except for one picture showing the back of his head.

The end of the opus is left hauntingly open, daring the reader to plumb the darkest depths of his or her imagination to find what this fevered wish of a madman rising could possibly be.

I will never forget my eighteenth birthday party; it was the best of the rest. The weekend before my real birthday, my mother and I prepared for the party I was going to host that day. We hung balloons and streamers, and we laid refreshments on the table. At the door was four of my high school *amigas, and one of them brought a friend. We ate pepperoni pizza and drank Pepsi, it was great. As mother lit the candles, I was filling up with ecstasy. After I blew the candles, I was presented with… a big jawbreaker from Kellie, an R.L. Stine novel from Sarah, a planer [sic] with stickers from Miranda and a rabbit doll with jelly beans from Tiffany. We watched Good Burger and had fun. After they left, it was done. What did I wish for?