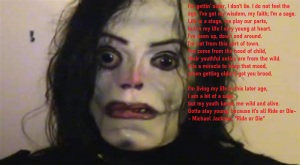 In the midst of his delusions about being possessed by Sonichu, and also a version of himself from another dimension, Chris-1218 explained that where Chris-1214 comes from, the world is mostly the same, but there are some differences between that world and ours. He went on to claim that the biggest difference is that Michael Jackson did not die in 2009 but lived a few years longer, releasing two more albums before dying of a drug overdose prior to a medical operation (much like in real life). Jackson's mental state while writing his last two albums was one that reflected acknowledgment that he was getting old and at risk of dying, and a desire to remain young at heart in the face of old age. One wonders if Chris was subconsciously drawing from his own insecurities when he came up with the poem, particularly when Jackson himself was a known manchild (albeit one that was incredibly productive and genuinely talented across multiple fields, unlike Chris).

"Sonichu" provided a sample of the lyrics to "Ride or Die" with his eighth Discord interview as a means of proof that Chris-1214's account was authentic. Included is a verse and part of the chorus:

Aside from the song's title, the lyrics lack Chris's signature random capitalization that's typically associated with his writing style (although the use of semicolons in pop song lyrics is unusual to say the least). However, the lyrics are inconsistent between using contractions and listing out more formal words, and the poem seems to lack Jackson's type of lyrical structure in places. It also doesn't have the structure of either a standard verse or a chorus.

The expression "ride or die" was originally used by motorcyclists who thought that life wasn't worth living if they couldn't ride their bikes, but it's become much more common in recent years to refer to a lover or friend who is loyal to the point of death. Neither definition makes much sense in the context of the song; it may be meant to suggest that 1214 MJ fears he will die if he slows down and stops making music.