Chris standing nonchalantly next to a pedofork.

A pedofork ([ˈpɛdəfɔrk]), a portmanteau of "pedophile" and "dork", is Chris's term for a pedophile (paedophile to non-Americans), child molester or anyone else with some sort of sexual interest in the underage. This term was coined in his "Madman Rising" video in response to trolls comparing Chris to "that senile old man in Family Guy", known to the rest of the world as Herbert the Pervert.

Suffice to say, this was one of Chris's first overreactions to trolls and an early step towards becoming a lolcow. Chris has subsequently tried to remove or retcon out details or themes that could be viewed as borderline or outright pedophilia from his Sonichu comics, although, with Chris's tendency to be very slow-in-the-mind, some things still manage to remain. 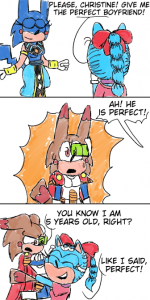 At first glance, Chris appears to rigidly adhere to child sex laws; as the age of consent in Virginia is eighteen, Chris makes it clear when advertising himself for his Love Quest that all potential sweethearts must be no younger than eighteen (and no older than he is at the time). However, it's likely that Chris doesn't understand why these laws actually exist and may see them as deterrents in his Quest, in the same vein as jerkops and Mary Lee Walsh.

Two more items of note: Joe Weston, Chris' own grandfather, was a pedofork (at age 30, he married Barb's mother, who was half his age), and Chris himself used to wear pedo-glasses.

Chris's misunderstanding of why age of consent laws exist is evidenced by a scene in Sonichu #8, when the Rosechus decide to strip for women's rights. Fourteen-year-old Zapina asks if she can join contribute to the naked bouncy giggly protesting fun, but Rosechu tells her no, adding in disappointment that she can't because of her age. When Zapina offers to be a spotlight instead, Rosechu hesitates, citing "the dumb laws". It is unclear whether this refers to the same laws that bar Zapina from stripping or the ones against exposing yourself in the presence of a minor. Either way, it seems odd that a self-proclaimed feminist would be annoyed with laws that protect young girls from being manipulated into sexual relationships, but Chris likely doesn't understand this. 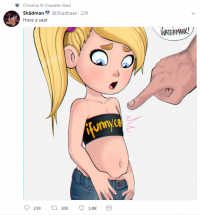 An image by Shadman that Chris liked.

Chris also feels the need to talk about the sexuality of Sonichu and Rosechu's children – all three of them are underage, being 11–12 years old as of 2018. He has drawn Roberta (Robbie) Sonichu having sex with Mimi Rosechu while wearing a strap-on to hide the ugly growth and rubbing the space between his legs with the genitals of Mimi... Robbie is canonically 11. In this image, his canon age was seven. 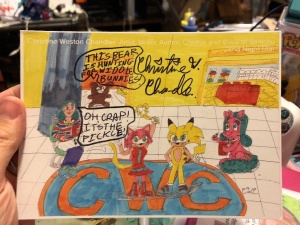 Autograph card sold by Chris in August 2018, featuring a Pedobear.

Chris also mentions how the other two children, Cerah and Christine, are lesbian and bisexual respectively. He makes mention of Cerah finding "true love" in a female partner (and we all know what that means), and Christine being "turned on" by both males and females (at the time Chris wrote this, Christine was canonically 8). Both sisters are canonically 12 as of 2018. Whether or not their evolved forms are meant to be their "adult" stages is unknown. Seeing how they still go to school, they are still children.

In September 2017, Chris followed artist Shadman on Twitter.[1] Shadman, the pseudonym of Swiss artist Shaddai Prejean, is notorious for his horrifying fetish art, including explicit drawings depicting real-life underage children.[2] According to Merryweatherey, Chris said that he had followed the account because one of his fans had directed him to Shadbase and claimed that he had drawn a piece of fanart Chris liked, and that Chris was unaware of Shadman's reputation.[3] However, Chris did not remove Shadbase from his follow list, and in October, he liked a drawing of a young girl posted by the account.

On 2 February 2018, Kiwi Farms user Hurtful Truth Level revealed a conversation which the Idea Guys and Chris had. In this particular conversation, Chris went into explicit detail about how he would have sex with Blanc, an underage character from Hyperdimension Neptunia.

The Idea Guys tricked Chris into believing that he was a pedophile. According to a member of the Guard Dogs:

In addition, Cryzel Rosechu, a fictional character Chris was led to believe he was married to, was created by the Idea Guys and her age was given as 15 years old.

In a 4 July 2022 letter Chris sent to Helena Fiorenza, Chris had commented on how the Suitress, who he referred to by a pet name, looked like a "youthful high school sophmore".

Chris appears to understand the age of consent, though does not seem to know or care about how creepy it is to be attracted to women half his age, or even younger, fictional or real. On 15 July 2020, Chris tweeted a creepy and sexual remark to a Twitter artist named Christine Usagi (@Fluffy_TG). After Fluffy asked Chris through Twitter how old he thought she was, Chris replied in his Sonichu persona thinking she was "roughly veering on 18 or 21; entering young adulthood, and cute enough to still get away at times." (it's currently unknown what he meant by that last part). After the creepy reply, Fluffy_TG blocked Chris.

Chris has also allowed a shipping created by Helena Fiorenza involving Pickchu and Reldnahc Naitsirhc, despite them having a 20-year age gap.

On 16 July 2021, Chris and the Suitress were having a conversation. In this conversation, Chris had asked for her age, to which she claimed she was 19, despite actually being younger than this. Chris had previously estimated her to be 18 years old. Despite this large gap in their ages, Chris still agreed to have sex with her, and has claimed on at least one ocassion to "love" her. Chris has also claimed to have feelings for Bella and Annie Ikenberry, despite the both of them both being half his age when he said this. 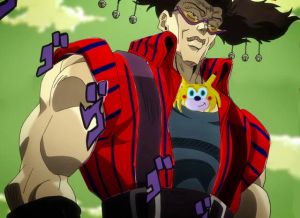