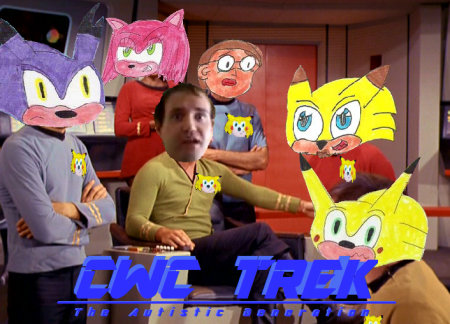 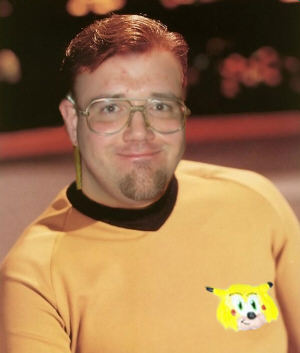 "Captain's Log" was, for a while Chris's usual opening to a video blog, first appearing in his 24 September 2008 video. It comes from popular sci-fi franchise Star Trek. In a typical episode, the captain, commander or other senior crew member would make an entry to log what has happened in the situation prior to the beginning of the episode. Most Star Trek Captain's Log entries are noticeably void of tard rage.

Sometimes, Chris gave an incorrect date (though the date is technically always incorrect since he says "Stardate" and gives a Gregorian Calendar date), or failed to provide a date at all. An example of Chris giving an incorrect date would be many of the entries made in July 2009. The CWCki has organized the Captain's Log entries by the date they were uploaded.

In many Captain's Logs from 2017, Chris instead gives the day's date in MM/DD/YYYY format as a string of eight digits, possibly in an effort to sound more technical or scientific. For example, CLog 06142017 has Chris pronouncing "Stardate zero-six-one-four-two-zero-one-seven". Surprisingly, Chris rarely stumbles over such long strings of numbers, though he does say them in a stilted manner and sometimes has trouble remembering them.

In his later videos, Chris began to stop including it, and he had completely ceased to use it by 2011. However, the opening made a glorious return on 18 July 2016 with Update 20160718, only to be quickly and unceremoniously abandoned for nearly a year. Starting in April 2017 with Live Game Stream - C-Log 04142017, Chris has begun consistently referring to his YouTube livestreams as Captain's Logs again, though he typically abbreviates it as "C-Log" or "CLog" in the video titles. Of special note is Live Game Stream - C-Log 04192017 - The Shirt, wherein Chris wears his classic shirt and Sonichu Medallion and introduces the video as a Captain's Log. It seems that Chris is capitalizing on nostalgia for his older days to bait his own trolls into giving him money.

More recently, he has taken to opening his videos with "Hello everybody, this is Christine Chandler coming to you live from home once again," even though most of the videos with this introduction were not recorded live.

"Captain's Log" appeared for the final time in Help send Chris-Chan to Everfree NW. Several weeks after the video's release, Chris would find himself arrested for banging his own mom.

Generally, a Captain's Log video is one in which Chris addresses his fanbase, a sort of video blog where he asks his True and Loyal fanbase to be his personal army or to express his hatred about some troll.

This is in contrast to other styles of Chris videos, such as those where he addresses a specific individual (often expecting people to know he's posted a video about them, such as Michael Snyder of The GAMe PLACe) or his music videos.

Occasionally, a video is dead serious, and therefore not worthy of a Captain's Log introduction.

Interestingly enough, Chris is not a Trekker/Trekkie and had never seen any Star Trek media as of 2009.[1][2]. His usage of the phrase most likely comes from other shows that reference it, such as Family Guy and Futurama. He may have encountered the phrase from the Star Trek game he purchased as a result of the Sonic the Hedgehog Watch & Win Sweepstakes competition, but knowing his gaming habits, he probably never played it.

Chris has a habit of including Captain James T. Kirk on various long lists of fictional characters, probably because he is aware of the popularity of the Star Trek franchise.

In November 2009, Chris began maintaining an irregular text blog on the CWCipedia, featuring updates on the progress of his comic and his quest to turn Sonichu into the heart of a multimedia empire. He also dubbed this a "Captain's Log" and marked the successive entries with "Stardates". It could be found halfway down the right column of the site's front page (and also at Template:Captain's Log, and he maintained an archive of his updates.

In a letter from jail dated 8 November 2021, Chris reveals that he is keeping a journal in jail called his "Goddess Log". He intends to release it to the public when he is released.