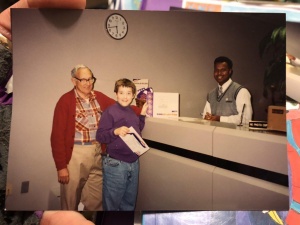 Chris and Bob picking up the shopping spree award.

The contest's grand prize — a $1,000 Kay-Bee Toys shopping spree — was awarded to at least two lucky winners, one of whom happened to be Chris; the other winner of the contest was a six-year-old girl from California, who decided to split her prize money with her classmates instead. A Martha Tyrone from New York claimed to have entered the contest when she was four or five and heard from a friend of her neighbor's that Chris had won; she proceeded to be jealous of him.

This seminal event marks both the early peak of Chris's life and the first hint of his future decline into the manchild we know and troll today. His parents were hopeful that this win would surely set him up for future success, prompting them to contact the local news media. The segment below was from the Dateline News program on Charlottesville NBC affiliate WVIR. It was Chris's first televised appearance, airing 11 years before YouTube was founded. The segment on Chris's DVD is partially seen twice, as it was repeated and re-recorded on a later edition of the same newscast.

The video shows several revealing things, namely that Chris's verbal skills and fashion sense have not improved or changed much since he was twelve. In fact, the only things that have visibly changed are his physical age and his sense of entitlement – some argue that this competition is what stroked his enormous ego. Chris's autism is also very evident just from the segment, seeing as his eye contact is very inconsistent as he speaks.

The anchors are visibly impressed by Chris supposedly mastering video games. This claim came from Bob, who wouldn't have an inkling of what mastering a video game looks like.

Ever since winning the Sweepstakes, Chris has entered several other contests, expecting to win through the sheer power of his autism – to varied results.

Of the games Chris bought, only three are known:

Chris is also seen pulling an original "Power Rangers Megazord" (est. $29.99) out of a bag at the end of the video.

Interestingly, Chris is described as a resident of Charlottesville, even though he was living in Richmond at the time. This suggests that Bob was still expecting to win his case against the Greene County school board, at which point the Chandlers would return to Ruckersville and Chris would be allowed to attend a mainstream school there. The case would be dropped later that year.

Anchorwoman: Well, we've got a little more for ya, including what Sonic the Hedgehog means to a very special Charlottesville boy. And the significance goes way beyond the high score and videos.

[One clip cuts out and another begins.]

Anchorwoman: Finally, tonight, Sonic the Hedgehog is running wildly in the Chandler household this weekend. 12-year-old Christian Chandler of Charlottesville was the winner in a video game shopping spree. Christian is one of only about a hundred winners nationally to receive $1,000 worth of Sega games and equipment. For his parents, it’s just another example of how well he's doing. Christian is a high-functioning autistic child. This past fall, of his own initiative, he entered a contest based on a favorite cartoon character.

Chris: ...I had to do was exactly...watch Sonic the Hedgehog...uh, cartoon...an—and risten to what Sonic says at the end of it…and writin' it down for a whole week. And then, I had to mail it in, and I had to be drawn out of a hat, and I just won!

Anchorwoman: And Christian's father says it only takes a few hours for him to master an electronic game and then...move onto another!

[An NBC Dateline News notice appears before the clip cuts out, making a weird "hweeur" noise, followed by a repeat of part of the report.]

Anchorwoman: —winners nationally to receive $1,000 worth of Sega video games and equipment. Christian is autistic, but he's entering the contest completely of his own accord was a sign to his parents of how well he is getting along.

Chris: ...I had to do was exactly...watch Sonic the Hedgehog...uh, cartoon...an—and risten to what Sonic says at the end of it…and writin' it down for a whole week. And then, I had to mail it in, and I had to be drawn out of a hat, and I just won!

Anchorwoman: And Christian's father says it only takes a few hours for the boy to master one of the electronic games before he moves onto another one.