From CWCki
(Redirected from Wild)
Jump to navigation Jump to search 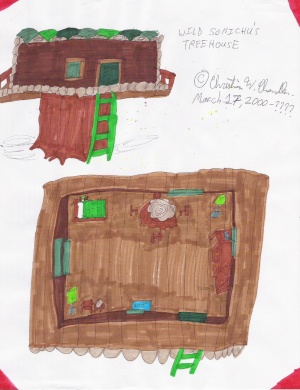 Wild Sonichu is a Sonichu and supposed leader of the Chaotic Combo (although he still answers to Chris in any of his Mary Sue incarnations) who formed from eggs released by the rainbow as a result of the collision between Super Sonic the Hedgehog and a Pikachu. Like all of Chris's male characters, he is essentially a bland puppet whose strings are usually limp except for when Chris wants to project his masculine fantasies onto him.

He is a Grass/Electric type, and a combination of several characters:

After being hatched, Wild is adopted by a Scyther and a Venusaur. Growing up in his Sonee form, he learns to use Vine Whip and Razor Leaf attacks like other Grass-type Pokémon. Somehow, his adopted father manages to teach him valuable skills by repeating the same thing over and over. He eventually evolves into a green likeness of Sonichu with a "leafy tail" that looks like a beaver tail. Said tail is claimed to be usable as a propeller[4], but this has yet to be used. Probably the least enigmatic Electric Hedgehog Pokémon, which is quite a feat given Chris's tendency to provide no back-story for characters unless and until he has to.

While swinging from vines, he is hit by Blake who is trying to steal the Legendary Master Sunstone on a hover board. He then teams up with the rest of the Chaotic Combo for the first time and they attempt to beat Blake to death for accidentally slighting them.

Like Bubbles, Wild makes a Non-speaking appearance in the second Sub-Episode. Rosechu claims to him in a phone call that if he were human, he would fall for Fandanna as Chris did. Even though Rosechu and Fandanna share no scenes prior to this call, we can assume Rosechu knows all about Fandanna, since when she isn't home making her man dinner, she's shopping at the mall.

Wild and the Chaotic Combo are teleported to help fight Mary Lee Walsh, but fail to save Crystal from being trapped in the Dark Mirror Hole. Naturally, they forget all about her (along with Chris) which frees up time for more relationship "drama" (in as much as Chris projecting his awful fantasies is dramatic) and horrible sex.

Wild becomes jealous when Bubbles and Angelica talk about how cool Bionic the Hedgehog is. He says he would get all the girls if he wasn’t kicked off the team for illegal vine defense. This implies Wild is both a cheating liar and too stupid to understand basketball.

Rage Against the Garbage

Wild, Sonichu, and Rosechu are teleported to the 4-cent_garbage.com Building to find a Sonichu Ball and confront the evil Jason Kendrick Howell. Before entering the building, Wild laments (apropos of nothing) about how his "father" Scyther was captured by poachers. Interestingly enough, Wild never actually bothered to look for his "father" after he saw the "passing-of-the-torch look in his eyes". Wild proceeds to immediately switch topics, turn invisible and sneak into the world's least secure building. He eventually recovers one of the Sonichu Balls.

Here we see the Chaotic Combo celebrating their 19th birthday on 2 February 2008. This is a ham-handed attempt to make Chris look like less of a pedofork. Almost nothing happens.

Wild informs Punchy that his taste in women, namely Angelica, sucks balls. Somehow Punchy is not offended, merely puzzled, and proceeds to plan out his rape. Other than setting up a very flimsy premise for Sonichu 9, Wild has no purpose in this comic, retarding him further as a character.

Wild attends a Date Ed class alongside Punchy, making it apparent that nearly every main character is a socially inept, desperate loser. He is paired with Simonla by their teacher.

Of course, mere moments after meeting face to face, the two are hopelessly in love. In an attempt to simulate an actual romantic moment, Chris rips off Spider-Man by having Wild swing through the city with Simonla in his arms. After this one outing, Wild takes her home to his "vibrating bed" then Simonla shows him the blueprints of her home for no adequately explained reason.

Wild, alongside his girlfriend Simonla, woke up when Silvana zoomed by his tree house.

Later on, the couple were seen battling Jerkops at the CWCville forest. After Simonla destroyed the Jerkops' police cars, Wild uses Vine Whip on the remaining Jerkops within his vicinity, entangling them all, and would launch them behind him and into the ground. Now sweating, Wild gets reminded by Simonla to not waste time recovering yet, as there are more Jerkops coming in. Wild would acknowledge her reminder.

After the battle, Wild was seen smiling in glee alongside his wife and various other characters that took part of this battle.

A month after the Great Battle of CWCville, Wild spots a Time Void in the distance over the CWCville Forest. Later, Magi-Chan teleports next to him. Magi-chan tells him that the time has finally arrived to rescue Chris-chan from the time void. He also tells him to use his vine whip as a form of rope to latch onto without falling into the Time Void. After Chris's rescue, 15 minutes of dialogue and a transformation (later revealed in Sonichu 10 as a plan to destroy the 4-Cent Garbage building), Wild says "Good Luck," to Chris shortly before leaving to begin his mission. 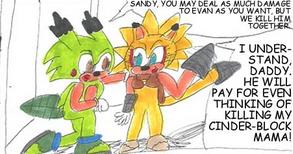 Wild Sonichu: Father of the Year.

After helping free Chris from the Time Void, Wild mostly takes a low-key role in this issue until the waning pages of episode 21. Shortly after it is revealed that Wild and Simonla have conceived an egg together, Simonla is killed by a Voltorb planted in the ladies' room by Alec. Shortly after the announcement of Simonla's death, the egg hatches. Wild names his new daughter Sandy and raises her as a single father, Kramer vs. Kramer-style (Simonla will be portrayed in the film version by Meryl Streep). The comic ends with a jury consisting of the now-grown Sandy and Wild sentencing Simonla's murderers to death. The father and daughter then personally cooperate to execute Evan in the bloodiest manner possible.

In the troll conclusion, Wild is getting used to his role as a single father. After he says goodbye to Sandy, who walks to school alone, she is brutally run over after jaywalking and not looking where she was going, while the driver was on his phone. He rightfully tells Rosechu off after she tries to give some fake empathy at his daughter's funeral. Overcome by grief, with his wife and daughter dead, Wild commits suicide by shooting himself in the head towards the end of the comic.

In this heartwarming ret-con story, Wild is overjoyed when Simonla, who survived the Voltorb attack with no explanation whatsoever, awakens from her coma. He informs Sandy on how the Amish celebrate the holidays, and the family celebrates with some nutritious food. Once the gang all meets up, he suggests they go visit their newly-transitioned creator to feed his ego show their support.

In a video uploaded 13 September 2009, Chris reveals that Wild Sonichu's adoptive Scyther father was in fact kidnapped "a long time ago". Chris goes on to reveal that Wild has to go and find him during the events of Sonichu Adventure. He later on told Jackie a proposed backstory for Wild: "Wild Sonichu's story is of after he loses his father to some Pok'emon poachers (possibly of Team Rocket and Giovanni), and years later, he hears the call of his father from afar, and he sets forward to find and rescue him. The ending being he finds his Scyther father evolved to a Scizor, and it draws into a plot similar to that in Star Wars between Luke and Vader."[5]

On 24 May 2014, Chris revealed on Facebook that he has revived Simonla. As can be seen in the previous wikilink, earlier on that day Chris uploaded to Facebook a photo album featuring Simonla, with Wild being seen with her in some of the photos and even yiffing her in one.

For Truth and Honesty, see the archived CWCipedia page on Wild Sonichu