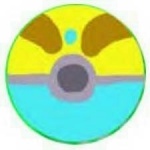 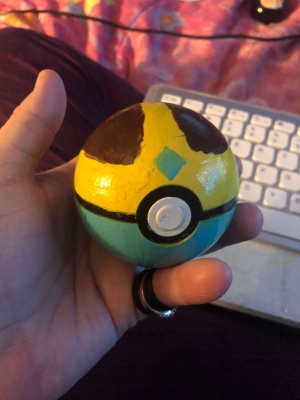 An S-Chu Ball is a special type of Poké Ball used for the capture and storage of Electric- or Hedgehog-type Pokémon. They receive very little mention in canon, as few of the Sonichus and Rosechus are ever stored in Balls.

An S-Chu Ball appears in Sonichu #0 and Chris claimed that Sonichu and Rosechu can be stored in them in the plot for his Family Guy episode: "Then I break out my two S-Chu Balls, toss them and release Sonichu and Rosechu; more greetings."[1] He also mentioned them in a phone call with Alec Benson Leary.[2] The S-Chu Balls are often confused with the Sonichu Balls, which hold some relevance to the plot, have a completely different function and are colored differently (S-Chu Balls are yellow and light blue, Sonichu Balls have a solid color). As the Electric Hedgehog Pokémon act more like humans than Pokémon, it's not surprising that S-Chu Balls don't feature in Sonichu. Oddly, Blazebob Sonichu and Chloe Rosechu were kept in ordinary Poké Balls. 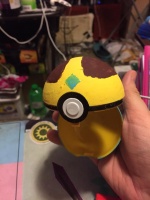 Chris slapped together a replica of a S-Chu ball using a Pokéball from Burger King topped with Model Magic, although he later lost a piece from it. He fashioned a new one in November 2017[3]. He also claims to have drawn an S-Chu Ball on the back of the Sonichu Medallion - this is probably what the blue blob to the right of his signature is.[4]

In 2018, Chris claimed to have retrieved an actual physical S-Chu Ball from CWCville and showed it to Count Dankula.

In 2019, Chris bought a Poké Ball Plus ($47) and painted it to resemble an S-Chu Ball.[5] Chris then tweeted pictures that showed he bought five more Poke Ball Pluses so he could have a full team of six pokemon on his belt and reap more in game rewards. Chris then justified his purchase by saying he bought them pre-owned and a fan gave him money.