This is what Chris actually believes feminism is.

The Incredible Lioness was the horrifying form that Rosechu was given in Sonichu #8 originally to face-rape the comic incarnation of Jason Kendrick Howell. Little information is given in the comic itself, but Chris gives further details on the CWCipedia. Seemingly analogous to Ultra Sonichu, rather than gaining power from exposure to Chaotic Crystals, Rosechu simply gains tremendous strength through stress and rage, closer to The Incredible Hulk than anything else; however, Chris most likely meant to rip off Sonic's "Werehog" transformation from Sonic Unleashed. Chris implies that because Rosechu is a woman she can't control herself when she gets into a rage, and the only way to calm her is to tell her that she's pretty, or whatever Chris means by "make amends with deepest apologies, heavy flattery, and promising to do as she wishes".[1] However, in both appearances in the comic, she calms down without any intervention. The transformation process also completely destroys her clothes; presumably she has to have the foresight to know she's about to go into a blind, unstoppable rage and remove the clothing, or just put on some makeshift clothes later. How and why her clothes are destroyed isn't clear as no part of the transformation involves anything that would damage clothing - she does not grow in size or change shape. Indeed, why clothes are such a concern for her in the first place is mystifying considering most of the Sonichus and Rosechus don't wear any clothing at all.

Chris also clarifies that only the True and Original Rosechu can transform.[1][2] One could argue that this is due to Rosechu's parentage; according to Chris, she was sired by a Luxray,[1] a lion-esque type of Pokémon. Since this makes sense, it's highly unlikely that it was intended by him.

Amusingly, Chris appears to have traced Incredible Lioness's pose in her debut appearance from a piece of official concept artwork of the heroic Godzilla series monster, King Caesar, used during pre-production of Godzilla: Final Wars. Considering Chris's relatively limited interests, it's more than likely that he simply found the original image somewhere on the internet and isn't familiar with the source material.

As you may have guessed, Chris created the Incredible Lioness in an attempt to show his support for women's rights. 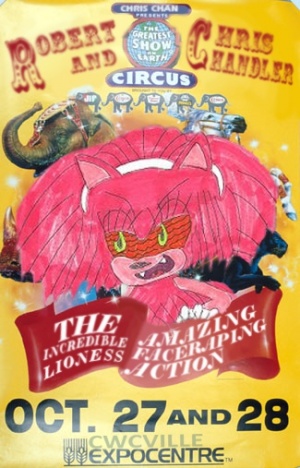 Roll up! Roll up!

In the climax of Episode 17: Rage Against The Garbage, Rosechu and Sonichu travel to Floor 66+6 of 4-cent_garbage.com to confront Jason Kendrick Howell about the ED page. Their main concern is the troll fan art of Rosechu with a duck, which Sonichu innocently interprets as a simple misunderstanding. Jason outright refuses to take down the ED page, and brutally throws Sonichu to the floor. Rosechu reacts nonchalantly to this, and does not transform until, as the two leave, Jason has the audacity to throw a pickle at her.

It strikes her on the back of the head. She picks it up and crushes it in a fist, as her mind fills with thoughts of violence and bizarrely ominous feminist diatribes, glorifying the creative power of the ovary. In spite of this supposed respect for the female being, Rosechu goes on to strip completely naked, exposing her breasts and vagina in what Chris maintains is a comic intended for children. At this point, she becomes The Incredible Lioness.

The Lioness leaps at Jason with murder in her red eyes. In what may be the most hideously explicit violence in Sonichu up to that point, she wraps her legs around his head, so that her vagina is pressed against his face – a move which was probably copied from Kekko Kamen. Then she tears a rip across his scalp, and bites down. In moments, Jason is near death (although dark forces keep him alive). Why this attack needed to involve Rosechu shoving her vagina into Jason's face is unclear. Rosechu then reverts to standard form, close to fainting from her outrageous exertion.

After the Moon releases an energy wave, Rosechu transforms into the Incredible Lioness in her backyard after picking up a Sonichite stone. For an unexplained reason, she isn't enraged when transformed. Also, she's nude. In front of her three children. Rosechu is surprised by this, and rushes inside to get a new pair of clothes.

Also worth noting is that Chris-Chan appropriates the Lioness' catch-phrase of "I am woman, hear me roar!" - albeit with the omission of two words - upon coming to the conclusion of being Transgender.