Sonichu #12-9 (formerly Sonichu #13) is the 14th issue of the Sonichu comic series. The unusual title is due to Chris's superstition about the number thirteen.[1] The name "Sonichu #13" would later be applied to the next issue on August 29, 2019, thus confusing readers into thinking that this issue is a sequel to Sonichu 12.

The plot of this issue was heavily shaped by the sagas and events in Chris's own life which occurred during the 14 months he worked on the comic - namely, BronyCon and the Doopie, Jessica Quinn and Idea Guy sagas.

Influence from the Idea Guys features heavily in the third act of the comic, as the writing suddenly veers into edginess and their OC, Kun T'Nyuget, is also inserted as Night Star's lover. 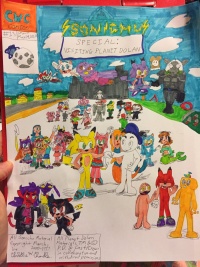 Original cover, for the Dolan crossover, cover date of 29 May 2017

Chris planned this in May 2017 as a crossover involving Planet Dolan, completing at least the cover and one page; however, the aftermath of the Doopie saga compelled Chris to cancel writing the story. Chris has claimed that the Planet Dolan arc has already happened in the Sonichu canon, but he never explained what actually did happen, like how the crew got to Planet Dolan in the first place, what happened between them, and whether or not there was conflict.[2]

On 25 August, following BronyCon, Chris posted a new cover of the issue, featuring his My Little Pony-inspired Night Star character. Other main characters are Diamond Melody, a character based on Jessica Quinn, and Kun T’Nyuget, Idea Guy's character. He also stated that My Little Pony versions of the Chandler family will be involved in this issue.[3]

Final front and back covers.

Based on the new cover, Chris seems to have deviated from his usual Comic Sans font, switching to Proxima Nova. He had discussed wanting to purchase the font on Twitter after talking with someone he met at BronyCon.

One of the consequences of the Idea Guy saga was that Chris's perception of reality and fantasy had been distorted more than ever. This is reflected in the cover, which originally stated:

Chris finished the comic on 20 July 2018. The back cover is a piece of art Chris commissioned from artist Feather Shine[4]. For the record, Feather Shine didn't know he would do so but was fine with it upon finding out[5].

This is the first comic to be available print-only. Chris posted 22 pages on Patreon, then put the comic on hiatus to devote more time to the Idea Guy saga. Upon his return to the comic, Chris only posted black-and-white previews of select pages and mailed out the completed book to patrons. This is also the first comic where Chris dropped the episodic formatting done on the previous comics.

The comic is split into four storylines.

Night Star tells of her origin, born to Missus Sugar Darling, an Earth mare, and Mister Gallop Crush, a blue-printed Pegasus. She was born on the same day as Comic!Christine and also has "a bit of the autism" and shares his heterochromia. She shared thoughts and visions with the young Christopher, looking at him watching Ghostbusters.

Night Star gains a cutie mark, and goes to school, learning how to hatch a dragon egg. she also perfects her "dimension magic and psychic skills", allowing her to travel to meet the Autobots, Sailor Moon, Red Skelton, and many others. When Chris created Sonichu on 14 March 2000, Night Star soon found CWCville and produced pony versions of the Sonichu comic.

Fast-forward to 1 September 2017. Night Star attends Canterlot High School and can transform into a human and teleport. She meets Sonichu and travels to KCWC radio station to help Jamsta Sonichu prepare for a concert.

In the chemistry lab, the pony-folk makes a permanent hair dye.

Night Star then tells of her meeting with Diamond Melody; they argue about whether Diamond or Rainbow Dash is faster. They share a hot dog (from Tesco, who totally do not make their products out of their own kin). While enjoying their treat, Nepgear makes a sudden appearance. The three exuberantly greet each other and decided to go to a DJ Pon-3 concert.

Afterward, Night Star plans to go to Cwcville to visit her mother. Diamond Melody decided to come to Cwcville too, as a date. After getting Diamond accustomed to her human form, Night Star took her girlfriend across Cwcville, bought groceries for pie, and slept at her home. They continue their date, alternating between the human world and the pony world.

Sadly, their relationship would not last long as Diamond Melody would later meet her human counterpart. Ashamed for being associated with a troll with a fat fetish, she moved away to Las Pegasus, never to see Night Star again. Night Star would mourn for days, with the last panel featuring Applejack and Twilight Sparkle coming to comfort her.

Some times later, we see Discord conversing with Night Star on what to do to raise some money for Cwcville. Since Night Star is now on talking terms with the CPUs, Discord suggested holding an air race between the Pegasi and the CPUs. Night Star also suggests a footrace between the Earth Ponies and the Electric Hedgehog Pokemon. Content, Night Star would tell Comic Chris of the plan. Comic Chris would appear to add praise for Discord being a good bodyguard.

Weeks later, Night Star would go to the market to get more Zap Apples. While mulling over the state of her human counterpart and Cwcville, an impatient Pegasus colt asked how long the Zap Apple line would last. Night Star was immediately struck by his handsomeness. Coming back to her senses, she introduced herself to the colt. The colt would introduce himself as Kun Hanhphuc (Vietnamese for "Happiness", original name was retconned).

In a text wall, Kun explained how he got his name and cutie mark and his occupation at Canterlot's Technology Division. After buying their Zap Apple products from Applejack, Night Star would explain her powers and the tech back at Cwcville. Elated, the two would agree to meet at Cwcville to visit their engineering facility. Night Star used her Sonichu speed to return home to have Magi-Chan make an appointment for a tour of the General Electric Plant.

In their human forms, Night Star and Kun had a swell time in the plant. However, their tour was interrupted by the city's attack from Rei Ryghts, the CPU of Atari and the leader of the Seven Sages. Night Star transformed into her Sonichu form to save the city, leaving Kun behind. However, Kun, concerned about her safety, chased his girlfriend.

In the center of the battle, Rei fought against the Electric Hedgehog Pokemons and CWCville's defense force. With Cwcville's efforts made futile by Rei's defensive abilities, Night Star opened a void portal behind Rei, sucking her in. However, a second void portal opened underneath Night Star, sucking her in with Rei. Kun made it just in time to attempt to save his friend, but due to his human form, he failed. Magi-Chan, being the Deus ex Machina in Sonichu form, saved Kun before he too got sucked in and escorted him back to Canterlot High for him to return home.

Even in her mega-evolved form, Night Star was defeated and captured by Rei Ryghts. Rei would then force Night Star to use her powers to relocate Tari over Cwcville, throwing her overboard afterward. Again, Magi-Chan the Deus ex Machina Sonichu caught her, sending Night Star, who is now in a coma to a hospital. The other CPU goddesses somehow appeared and made short works out of Rei and sent Tari plummeting far from Cwcville.

Over the next three weeks, Kun would stay in Cwcville, studying at the GE and sharing Equestrian technology and visiting his now comatose heartsweet. Soon after, Kun was able to revolutionize cloning and memory restoration. Flash forward to 6 January 2018, Night Star woke from her coma and Kun explained what happened. Kun would then her to his Cwcville apartment and later, back to Night Star's residence at Ponyville. They would live happily ever after since then.

The final part takes place after the event of My Little Pony: The Movie.

31 May 2018, Night Star was enjoying a cup of coffee when she received a telepathic message real-life Chris. In the middle of the psychic conversation, Night Star's cutie mark began to glow, which signified that a mission is on the way. Kun, whose cutie mark was also glowing too, came to Night Star, excited about the upcoming adventure.

Arriving at Kludgetown, Night Star makes a brief reference and promotion of the movie before heading out to a pub to meet Captain Celaeno.

As it turns out, Captain Celaeno has concerns over two of her crews, Pea-Tree and Squaker, who are now unusually distant to each other. When the three head out to Celaeno's ship, they meet up with Pea-Tree and Squaker. It is revealed that the two have conflicting opinions on The Storm King, with Pea-Tree remembering him fondly and Squaker knowing of the villain's malicious intents. Now the mission is clear, they need to convince Pea-Tree that The Storm King is evil. However, there is a problem, the Storm King is dead and there are no records of him. Just as the two wonder what to do, Tempest Shadow suddenly appears.

In exchange for a cut of the Storm King's loot, Tempest offers to provide the direction to his bases and coming with them. Arriving at the island, the three split up to search for damning evidence against him. Night Star found a mysterious ladder and Tempest found something more startling, her missing horn.

As Tempest slammed the drawer, she unknowingly activated a cage trap. Night Star called Kun to avoid it but got herself trapped. With Kun and Tempest being unable to lift the cage, Night Star simply opened a portal, and the three got out of the case.

Back at Celaeno's ship, Night Star and Kun pieced together all the information that the Storm King did indeed deceive Pea-Tree. It was also revealed that the Storm King's soldiers were the ones who found Tempest's broken horn in an Ursa Major's cave but kept it covered up by the order of the Storm King. Satisfied with her long-lost horn, Tempest left the duo. With the task finished, Night Star and Kun told Celaeno, who then ordered Pea-Tree and Squaker to report to her quarters. From the information, Celeano revealed to the two how he plans to bomb her and her crews if they betrayed him and ending with an anti-parrot remark. Shock by this, Pea-Tree took the records to read it for himself.

With the bombshell finally convincing Pea-Tree that the Storm King is indeed evil, he and Squaker finally reconcile. They then hugged each other and performed a beak bump. Night Star and Kun also shared a kiss in victory. Content that the conflict is finally resolved, Captain Celaeno offered the pony couples to come the pub to celebrate.

The readers are then taken to Night Star's room, where she is working on her comic. While taking a brief stretch, she decided to call real life Chris to help her finish her comic. Chris then proceeded to use his power to come, transforming him into an Alicorn in the process. Chris then states his satisfaction with starting this comic, with Night Star agreeing with her creator. Kun also appeared so he will not be left out, which is ironic when he somehow disappears when Chris and Night Star transform into their Sonichu forms.

In the end, Chris provides possible teasers to Sonichu 14 16 and dedicates this comic to the wonderful people he met at BronyCon.