From CWCki
(Redirected from Nowacking)
Jump to navigation Jump to search

Vinyl Scratch (also known as DJ Pon-3) is a minor character in My Little Pony: Friendship is Magic. Owing to her unique role in the show, she gained a significant following in the Brony community through numerous fan productions. Given the lesbian implications of the character, Chris developed a fixation with her. In 2018, he saw fit to insert this intellectual property into his own comic book series.

In the My Little Pony canon, Vinyl Scratch is a DJ who is usually seen as a background character in party scenes; it should be noted that both human and unicorn counterparts of her exist in the franchise. Not long after her first appearance, she became very prominent in fan productions, especially with an association to EDM music. She is often paired with cellist Octavia Melody, and is frequently implied to be in a lesbian relationship.[2] With Chris' outing as a "lesbian transwoman" in the spring of 2015, it should come as no surprise that Chris revered this relationship – aligning with the desired conclusion to his Love Quest. 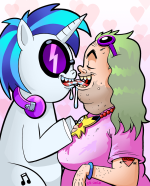 Jessi/Jesse Nowack (more commonly known as Nowacking) is an American voice actor and editor. Though not affiliated with official canon, most bronies regard him as the definitive voice of Vinyl Scratch. Before his FTM transition, Nowack identified as a lesbian, which most certainly caught the eye of our protagonist. 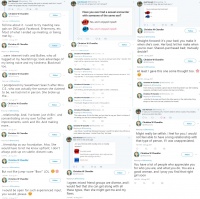 On 26 August 2017, Nowacking posted a series of tweets on relationships and online dating. Chris commented on most of her tweets, praising her, as well as going off-topic to talk about his history of being trolled.[8] Weens, led by Michael Hirtes, then spammed Nowacking with accusations against Chris, telling her to block Chris.

The next day, Chris discovered that Nowacking had blocked him and lay blame on the weens for it. Nowacking himself has not commented on the reason for the block. Chris continued following her by using his NightStar2891 sockpuppet, although this account was later blocked as well.[9]

Undeterred, Chris created a new sockpuppet account, TwiSparLicious, to follow Nowack and others who had him blocked. Chris later stopped following Nowacking on this account after Jessica Quinn temporarily broke up with him over his use of the sockpuppet.

During BronyCon 2018, rather than leaving well enough alone, Chris devised a plan to redeem himself in the eyes of Nowacking (at this time identifying as a transgender man) by presenting him with a drawing and a Vinyl toy. However, Chris was left upset when the voice artist rejected the truce.[10] This rejection lingered in Chris's mind for a long time, as in April 2020, the Sonichu-"possessed" Chris acknowledged his mistakes at BronyCon (which he went on to refer as a "PTSD moment"). That being said, he still sought interaction with the voice actor.[11] 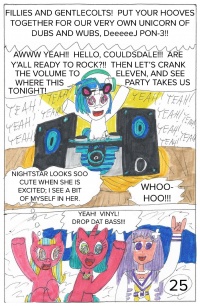 At the Vinyl gig.

At Canterlot High school, Comic Chris approaches Diamond Melody, where Vinyl Scratch introduces the two to each other. Later, in Equestria, Night Star, accompanied by Diamond and Nepgear attend a concert, where pony Vinyl is dropping dat bass.

Vinyl makes her third and final appearance in a cameo at the market during the third act.[12]