TwiSparLicious, a.k.a. Kert Varnsen, is a sockpuppet account used by Chris, created on 2 September 2017. Following a month of troll suspicion, Chris confirmed his ownership of the account in a Q&A livestream.

"TwiSparLicious", the account's handle, is a portmanteau of "delicious" and "Twilight Sparkle", the latter of which is the main character in My Little Pony. The portmanteau is likely based off Twilightlicious, an Internet meme introduced by MLP voice actress Tara Strong in 2012.

"Kert Varnsen" is likely to be derived from "Kel Varnsen", an alias of the character Jerry in Seinfeld.

Evidence of being Chris 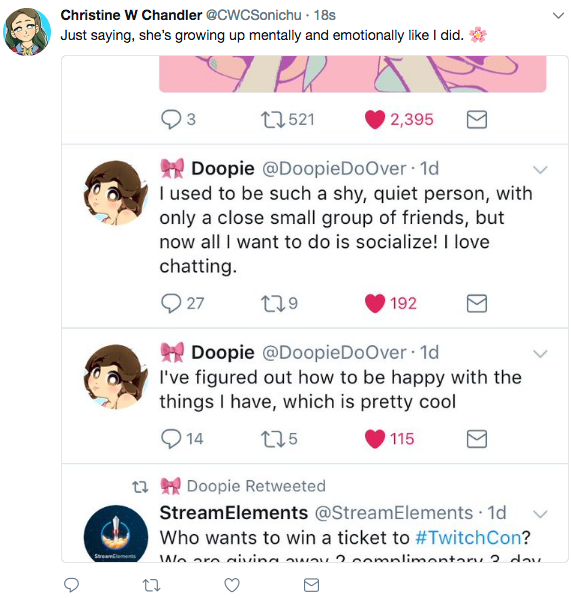 Chris posts an image showing that he had liked several of Doopie's tweets, despite being blocked.

The account was first noticed in September 2017, when Chris tweeted screencaps of tweets by people who have banned him, commenting on them from his main @CWCSonichu account.[1][2] Many of these screencaps indicated that he had liked the featured tweets, even though both of Chris's previously known accounts have been blocked from viewing, let alone liking, these users' tweets. Additionally, not only do the tweets displayed in the screencaps match with TwiSparLicious's list of liked tweets,[3] the order of the account's like on each tweet also corresponded to the number of likes displayed in Chris's screencaps (i.e. when Chris posted an image of a tweet with n likes, TwiSparLicious was nth to like the tweet).

The punctuation and syntax of the account's tweets to Doopie also match Chris's unique writing style.

On 26 September 2017, Jessica Quinn broke up with Chris. When they got back together a few hours later, Chris linked to Lazycast and posted, "With due respect, this one was the last @LazyCastPodcast I’ll hear; cutting my ties. I’m sorry for unsubscribing."[5] The Lazycast episode he had linked to was #10, the same one that TwiSparLicious had tweeted to Doopie about the previous day. Subsequently, TwiSparLicious unfollowed both Doopie and Nowacking after Quinn's ultimatum to Chris.