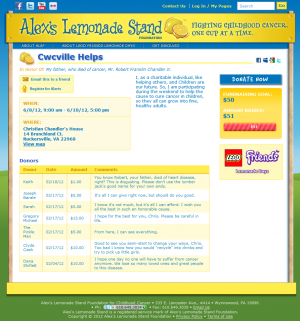 Alex's Lemonade Stand is a charity program founded by Alexandra "Alex" Scott to raise awareness of childhood cancer. One of the organization's business partners was Lego, which used its new female-targeted "Lego Friends" line to help. Chris, being the Tomgirl and fan of Lego that he is, set up a lemonade stand in June 2012 in hopes of raising money in honor of his deceased father. This event is notable for being one of the exceedingly rare times where Chris actually tries to do something selfless for once.

On 4 February 2012, a special "LEGO Friends Event at Toys 'R' Us Stores" was held, at which "children ages 5-up" would be able to physically build toy Lego lemonade stands to take home with them.[1] Lego would donate one dollar to the charity for each one built. Being older than five, Chris participated and proudly told his Facebook friends about it.[2] It was through this event that Chris learned of the option to host an actual lemonade stand, and he immediately registered one.

According to the original event page, entitled "Cwcville Helps," Chris was to run the lemonade stand for three days--from 9 a.m. until 5 p.m on the weekend of 8-10 June 2012, more work than Chris had done since Cutco had ditched him nine years earlier. The stand was originally to be set up outside Chris's house; moved to the old Circuit City building, 100 Albemarle Square, Charlottesville; and then moved again to Wesley Memorial United Methodist Church. The initial fundraising goal of $50 was quickly met after donations from Chris's friends, neighbors, and fans, as well as more sinister figures like Clyde Cash and the Man in the Pickle Suit. As of 2 June, the total donated amount exceeded $150, but Chris never changed his original donation goal. 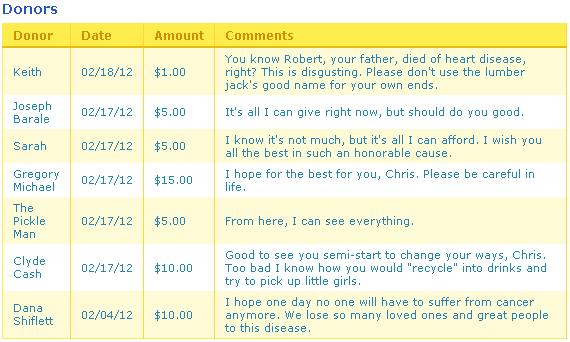 Shit was so cash!

The page was temporarily deleted for reasons unknown; it is possible that Chris decided that raising money for dying children wasn't worth the stress of hearing mean things from trolls. It resurfaced at the beginning of June with the new location listed as his church.

Chris successfully hosted the lemonade stand (with some help from his congregation and UVA students), but it took place only on 10 June, and only for a few hours.[3] He informed Facebook, "Including my ten dollar donation, I have raised $50.00 for the foundation."

This is one of the few times when Chris has both followed through on his promise and positively contributed towards the community. 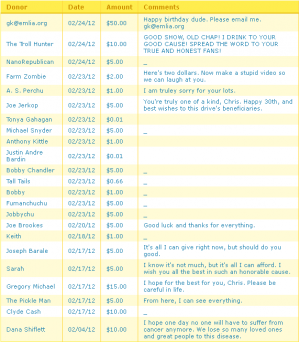 Comments that did not quite make the cut.