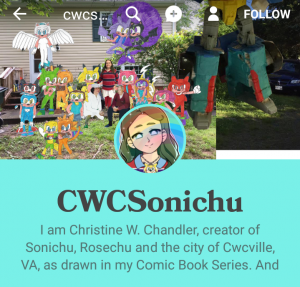 On August 15, 2017, Chris made a Tumblr account, possibly as a new social media platform to reach out to his fans. The bulk of his posts consist of reblogs of Patreon updates, along with many Facebook and Twitter statuses. However, occasional twitter screenshots will also make an appearance from time to time.

Interactions with other Users

Chris left several comments on the fancomic, Rosechu's Story, which he liked so much that he ripped it off for Sonichu 15.

On a reference to the manner in which his medallions were crafted:[1]

When the strip pointed out Rosechu's superfluity as a character:[2]

Inquiring about the identity of the song For You, I Will by Monica:[3]

Not getting a reference to his multiple acts of plagiarism:[4]

Chris mainly subscribes to blogs about My Little Pony. Notably, he is also following Doopie, despite her telling him to leave her alone.