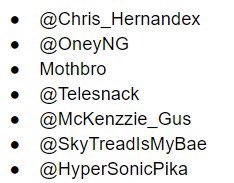 Excerpt from a list of people Chris "doxed" for being "backtalkers" (in actuality, the list only contains their online handles). Note YouTuber OneyNG's presence on the list.

Doxing is the release of private or identifying information with malicious intent. While Chris does have malicious intent, he fails at the identifying part as most if not all of the information he gives out is false. Chris believes doxing is a direct ticket to trolling and therefore (tries to) leak information on his enemies not realizing that he is either being fed false information the entire time, or making gigantic leaps to conclusions along the way.

Chris was told that a picture of guido Lee Hotti was Clyde's real face by lordsillynipples. Chris, being a naïve idiot, believed this and made an exposé video on Clyde. Additionally, Chris, through some unknown means, had obtained a picture of a man having missionary sex with another man in a Spiderman costume. He would threaten to blackmail Clyde with this picture unless he left him alone, reavealing it bit by bit.

Surfshack Tito incurred the wrath of Chris during the Calling Out saga, as he had stolen Chris's gal-pal (read: shown her how horrible Chris is) and used social engineering to access his PSN account.

Chris's demands for Tito were to make apology videos to him, The Wallflower and Sony. He was also told to give $1,000, but Chris later removed this demand, presumably since he realized it would be outright extortion. In response, Tito made an video where he dubbed a voice over of him apologizing to Chris over a video of a fat guy jiggling his belly.

Thorg was the next target of Chris's holy war against the trolls. He was convicted of putting up a billboard calling Chris a homo. His tasks were to put up another billboard in New York calling Chris straight and deleting pages from the CWCki.

Thorg didn't give in to these demands, so Chris revealed his information. Thorg was apparently a man named Jeremy Slonwhite from Vancouver, Canada who worked at a GameStop and doesn't believe in a god. Of course, this dox was inaccurate but Chris believed it to be true, making two more videos to rub it in Thorg's face.

Even after 2 years, Chris couldn't get over the Asperchu comics, all this pent up rage was used for doxing Alec. He demanded Alec make an apology video and leave the internet before 31 August 2011.

When Alec did not give in, Chris claimed his real name was "Christopher Paul Whitney" from San Antonio, Texas, Also known as the YouTuber "Fatman" but unluckily the dox wasn't accurate. Fatman other than having a totally different voice from Alec's, is from Rutland, Vermont. Fatman later acknowledged this video and called Chris a dumbass.

Next in line was Jack himself; his criminal record included making Chris hump his PS3, forcing him to sing OK2BGay, and worst of all; adding pro-LGBT ads to his precious CWCipedia.

Chris revealed his real name was Ahuviya and that he was a communist transgender. Chris insults him by calling him a homosexual while wearing women's clothes and makeup. In reality, Ahuviya Harel (also known as ADF or Phillip Haskins-DeLici) is an infamous lolcow in his own right.

The last person to be threatened before the abrupt end of the saga. Chris wanted to dox BlueSpike for creating the Julllaayy meme and increasing the percentage of finding clay in Chris's ass to 100%.

Chris revealed his real name was David from California. His demands for David were to apologize to him and leave the internet.

BlueSpike never released a video due to him being busy writing a summary for To Kill a Mockingbird to pass his English class. Chris too never responded after this due to Bob's death marking the end of this saga.

Jeff Ouzuo also known by his tomgirl name Francine, was subject to a round of doxing by Chris in 2015 for impersonating Chris to con lesbians into having sex, selling unauthorised Sonichu merch and creating Christian Weston Chandler's Adult Chronicles.

Jeff apparently was a transgender who wasn't transitioning very well, lived in Seattle, Washington after running away from Pittsburgh[2] due to being scared away by black men asking for directions. He also liked to pour lemon juice into his urethra and was arrested for urinating in a children's playground.[3]

Chris tried to dox the troll Larry Vaughn to the Watchmen and Null, telling them Vaughn's name was Daniel Arias.[4] The Watchman Naught attempted to publicly dox Vaughn using this name[5] but Vaughn was unfazed.[6] Chris had gotten this "intel" from Bella[4] - months later, Vaughn claimed to have been working with Bella to manipulate Chris.[7]

Many who attempt to help, troll, support or befriend Chris have gotten their private information leaked online, either by Chris himself or one of his many weens. 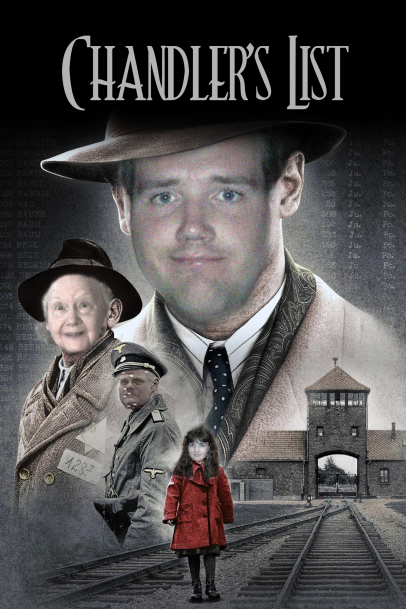 A reboot of the Calling Out Saga began on Twitter in June 2020 when Chris said he will be exposing people who "talk smack and shit behind [his] back online".[1] He started this crazy crusade a few days later by listing the usernames of the supposed wrongdoers. He continued "doxing" almost a month later, this time by posting screen-caps of a list of people consisting of weens, a-logs, white knights and enablers, plus a handful of non-Quintet artists, gamers and YouTubers, including OneyNG, who has made frequent reference to Chris and Sonichu over the years.[11] Due to the proximity of his reemergence, it is heavily theorized in Christorian and enabler communities that Jacob Sockness has a role in making the list due to him pulling a similar stunt that failed in November 2019.

It seems Chris still has not learned what a dox is, since all this accomplished was giving the people from the Unholy Quintet more exposure - something that many of them crave. The only thing this may accomplish is Chris having to deal with more weens typing “JULAY” or “Get a Job” to be on the next list: he also called the list a dox, despite only consisting of online handles with no personally identifying information.

One more thing to note is that Chris thinks websites that follow his antics are filled with lunatics who will dox anyone he mentions. It’s also confirmed that no one on the lists has been blocked by him, meaning that he accomplished nothing.

Chris has often doxed himself, such as by dropping his address or phone number in posts and videos. His reasons for doxing himself vary, he may dox himself to prove to others that he is the one and only Christian Chandler living in 14 Branchland Court. He has also doxed himself while challenging trolls to come to his house to fight him. He also gives out his address and phone number to any potential gal-pal over the internet without thinking twice.