2022 is the fifteenth year since Chris's discovery. Chris's activity during this year is currently uncertain, due to his arrest and upcoming court proceedings on incest charges, and the eventual sealing of his case due to relentless pestering from the Unholy Quintet. Chris will spend the entirety of 2022 in jail.

Chris spent his 40th birthday in jail and missed out on BABSCon in April. In July, Chris's case was to be sent to a Grand Jury.

Chris sent a few letters to Kengle and other fans. He also made some phone calls, including warning the world about global warming and asking for money to be given to Barb.

Chris's hearing was scheduled for 3 February,[1] but was pushed back by a third continuance, again, for unknown reasons.[2] The month ended with Chris being transferred to Western State Hospital - the implications of this in regard to his sentence and release have yet to be seen.[3]

March 2022 was one of the quietest months of Christory in over a decade. For the entire month, absolutely nothing was heard from Chris, due to his transfer. The closest thing to actual news was a returned letter from Spamton,[4] which revealed that no future letters sent to jail would be forwarded to Chris. However, some holdover letters from January did arrive near the beginning of the month, and The Gamer From Mars' documentary The Chris Chan Conspiracy premiered its first two episodes.

BABSCon finally took place after a two-year-long delay from the ongoing pandemic. Unfortunately, Chris could not attend, as he was incommunicado in a happy home. 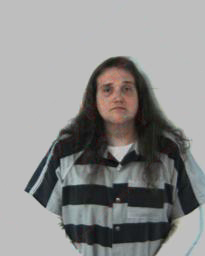 Chris was sent back to CVRJ on 3 May with a new mugshot taken upon his return, where he's seen looking somewhat shaken by his experience during the transfer. 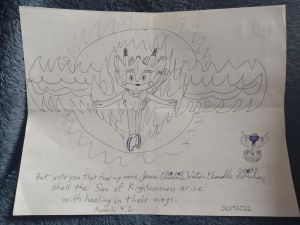 Art from June 2022, depicting "Jesus Christ Chan Sonichu as the Sun of Righteousness"

On 28 July, a hearing on the incest charge took place, and it was decided to present the case to a Grand Jury, implying the charge is being prosecuted as a felony. This occurred only one day away from the first year anniversary of the Incest Call leak and four days from his arrest.

Chris's case was scheduled to be heard by a Grand Jury on 8 August for a potential felony incest charge. A continuance occurred for a motion hearing on 9 August regarding an autism disorder deferred disposition. Further, court records were sealed. Chris would remain in jail throughout the month, releasing more jail art toward the end of August but otherwise being strangely silent. Also, an incident involving trans streamer Keffals leads to Kiwi Farms being taken down from the internet, and the CWCki goes down as well due to sharing the same host at the time.

Nothing happened this month, as Chris suddenly stopped sending letters and the CWCki was down throughout. Many wondered whether or not Chris was even still in jail.

New pictures and footage of 14 Branchland Court emerge. This month also saw the return of the CWCki after a while of downtime, now on a new host.

3 November was the 15-year anniversary of Chris's Encyclopedia Dramatica page.