Encyclopedia Dramatica (a.k.a. ED, æ and Ensykapeia Dramakka) is a satirical wiki dedicated to showcasing what its users deem to be everything wrong with the internet, written in a style that demonstrates the very things that are wrong with the internet. The site is known for making use of shock value and featuring utterly scathing language used to mock the subjects of its articles.

ED was the home to the Chris-Chan page that introduced Chris to the world at large in 2007 following 4Chan and Something Awful's discovery of the lolcow, which made him a popular target for trolling. Upon learning of ED, Chris began campaigning for the removal of the article for smearing his name, and particularly took offense to various pieces of "fan art" depicting Rosechu with a penis. Naturally, this just led to the trolls adding more content to the page as he shared a series of written and recorded rants about the article.

In complete violation of common sense, Chris added lots of unwanted personal information to their article on him, including uploading an infamous drawing depicting a sex act between himself and a real-life friend. Instead of the "information overload" overwhelming the admins into taking the page down, like Chris believed it would, it gave a substantial amount of oxygen to the organized trolling effort while also destroying the aforementioned friendship. The sheer abundance of shenanigans with Chris eventually led to the creation of the CWCki, since the ED page became too long and unwieldy for a single article, which has succeeded ED as the best resource for information on Chris's life.

In late October 2007, Chris drew the attention of the folks in a forum at Something Awful, a comedy website. Shortly thereafter, the good people at 4chan also trained their lasers on Chris. Topics of discussion included his Sonichu comic, his website, and his MySpace page. Anna's blog story, "The Tale Of The Crazy Pacer", was also uncovered. The wealth of information and its lulzworthiness prompted the Anon later known as Jason Kendrick Howell to create the original Chris-chan page on Encyclopedia Dramatica, on 3 November 2007. Within two years it underwent over 5,000 revisions and became arguably the most popular page on the site.[2]

Almost immediately, Chris discovered his ED page, during what he called "the worst weekend of my life".[3] He was horrified by the explicit fan art, what he would later call "Dark Parodic Shit".[4] He was especially enraged by the inclusion of a recent photo of himself, surreptitiously taken at The GAMe PLACe by Mimms and uploaded to 4chan by Lucas.[5] "A hacking terrorist group, Anonymous, and 4Chan are somehow involved in that page as well", he intoned.

Chris's initial response to this character assassination was civil. He uploaded a video on 7 November, addressed to ED, requesting that the page be removed on the grounds that it misinterpreted his noble and innocent person. Within a few days, however, he opted to take efforts to personally delete or edit the page.

After a considerable amount of bitching, Chris posted this gem on the ED talk page:

Chris then returned, admitting defeat after his tard rage:

Trying another angle, Chris also encouraged ED to muster as his personal army to go after Joshua Martinez. Obviously, nobody did what he asked[6] He also tried to create a page on ED for his "CCWC's Fanart of Horrors" (see: troll art), but a sysop immediately caught it and redirected it to an anti-Semitic template.

Chris's meddling with ED was a key reason for the destruction of his relationship with Megan. On 11 November 2007, in an attempt to "shove so much information down their throats and drown them into taking the page down," Chris uploaded five pornographic drawings to his ED page, including the infamous ShecameforCWC.JPG. When Megan found out about the drawing in March 2008 and realized she was a part of it, it was the final straw. Chris made more furious efforts to scrub the images from ED, but to no avail. Of course, Chris blamed ED for all of this.

By late summer 2008, Chris had largely given up on direct involvement with ED. Around the spring of 2009, he may have posted one or two comments on the ED talk page referring to Clyde Cash. The first is below. It was deleted fairly quickly.

There was some dispute over it actually being Chris until he himself confirmed it in the post that followed:

According to Clyde, the above entry was deleted after roughly a minute, probably due to Chris realizing that if he were to ever arrange to meet Clyde, he'd only send his parents anyway.

Screenshot of the article.

On April Fools' Day 2009, the Chris-chan article was taken down and replaced with a message.

Not surprisingly, the page was put back up on 2 April.

Chris-chan was a subforum of the Encyclopedia Dramatica forums (commonly referred to as EDF). It was created such that the talk page for the Chris-chan article could be used for its rightful purpose to discuss improving the article.

Chris indicated in his 13 September 2009 video that he had read the ED forums and had discovered a plan to photoshop images so they looked like they were from a Sonichu game.[7] Chris firmly believed this forum to be the main hub for trolling activity, despite other forums and websites (such as this one at that time) having far more significance. 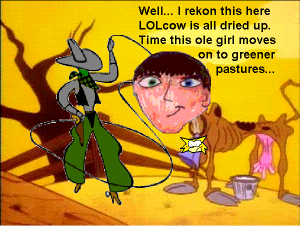 For several months prior to the events of the BlueSpike saga in early 2009, many thought that Chris had dried up, that Chris could go no further down the rabbit hole. The FCTC's posting of new pics of Chris's bent duck in December 2008 prompted an ED admin to lock the talk page and demand satisfaction.[9]

Encyclopedia Dramatica’s coverage of Chris and Sonichu became a victim of its own success: despite having many sub-pages to reduce pressure on the main article, ED could not cope with the continued growth of interest in Chris, especially in the aftermath of the FCTC posts. ED also experienced problems with misinformation on Chris, occasionally removing false or exaggerated rumors such as the claim that Chris attempted to molest Patti, or that Ivy was just a blow-up doll.

ED’s coverage of Chris continued to get updates until April 2011, when ED relaunched as Oh Internet: Oh Internet was an attempt to raise the revenue required to stay online by removing controversial content that would deter advertisers. However, the move also reduced coverage of Chris to a single page, and left out much of the crucial content that defined Chris, such as CWCville.[10]

In October 2013, Oh Internet quietly went offline following internal disputes and divisions over the 2011 relaunch, and work began on rebuilding Encyclopedia Dramatica by scraping articles and images from archived websites: ED then struggled to stay online through numerous domains over the years. As of 2022, ED and their coverage of Chris and Sonichu barely cling on to life, with most of the information long superseded by this very wiki. In a sense, Chris has sort of triumphed over ED by means of outlasting them in terms of overall relevancy, but at a great cost to himself and the people associated with him.

As for Chris himself, the ED page bothered him for years, and presumably still does, but he rarely mentions it anymore. An entire page of Chris's website, established in December 2009, was dedicated to "correcting" the evil ED article with his own True and Honest take on the situation. Naturally, it was all about how Chris isn't remotely responsible for anything he has done wrong, and how it's all the fault of his autism or those DANG DIRTY TROLLS. However, Chris's worsening grasp on reality, and changing priorities on other enemies, caused his rage against ED to decline to a point where he only made occasional references.[11]