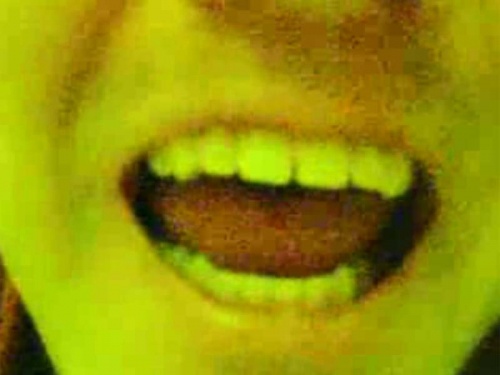 He has them and isn't afraid to show them.

Originally assumed to be yellowish as a result of poor video quality, Chris's fangs are more likely discolored as a result of the copious amounts of soda he drinks (which has other effects as well).[1] The fact that he has multiple visible cavities seems to support this, although Chris could just be too lazy to brush his teeth. What is certain is that despite his claim to visit a dentist every 6 months, the inside of his mouth is even more horrifying than the outside. 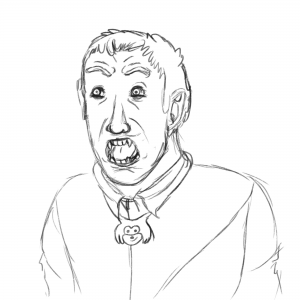 Chris believes his teeth are more menacing than those of ordinary humans. He revealed his fangs in a series of videos in 2009, in some cases essentially shoving the PSEye in his mouth. He believed this to be intimidating, although the actual effect of being exposed to the inside of his mouth is revulsion. One can only infer from these threats that Chris intended to use them to bite his antagonists, but considering the awful state of his teeth, he'd be lucky if none fell out in the process.

Ironically, Chris's canine teeth are so blunt and rounded that they almost look like incisors (front teeth). Though flat canines can be genetic, the canine teeth can gradually become blunted over the course of a lifetime, since they are involved in chewing--something Chris does a lot. Despite not even having reached middle age, Chris's teeth are already extremely blunt, meaning they would make for even less effective weaponry than the contents of the human mouth already do.

Perhaps realizing this, Chris stopped baring his fangs after 2009, and has since upgraded his arsenal to a pocket knife, Son-Chu, mace and a Baseball bat. Even then, Chris still believes his canines to be actual "fangs", even going as far as depicting his Memoji with them.

Chris has had an operation to remove his wisdom teeth. He keeps them in a jar on top of the Megan Shrine and also made a Yu-Gi-Oh! card with them on it. He also thought Julie would be impressed by this fact, letting her know that "I still have them preserved in a jar with a dash of alcohol.",[3] seemingly unaware that since teeth are hard and solid objects, they shouldn't require to be preserved in anything. Being the bizarre narcissist that he is, Chris feels the need to immortalize any significant event in his life in some way, be it through short stories, comic adaptation, or even custom trading cards. The fact that he finds his removed teeth important enough to think that they would be worth adding to a card game says a lot about him. 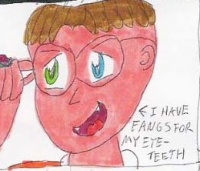 Chris opts to make his fangs appear to be more "adorable" than "menacing" in the comic.

In Sonichu 10, the devil Beel manages to steal Chris-chan Sonichu's medallion, causing him to revert back to ordinary Chris. At this nadir, Chris discovers that his powers actually reside in his high school ring, and he saves the day. To further bolster his self-esteem, Chris takes this moment to show his fangs, noting, "I have fangs for my eye-teeth." This turns out to have no bearing on the plot.