"Slow-in-the-minds" and "slow-minded" are CWC-isms that refer to developmentally disabled, cognitively delayed, crazy, and/or generally unintelligent people (other than Chris himself, of course). The term was first seen in a 1999 high school assignment about prenatal development, where Chris identified various factors that could cause newborn children to have "slow minds". It also showed up in his school project "A Week With Christian Chandler".

"Slow-in-the-minds" hits a fine trifecta of points. One, it displays Chris's arrogance, seeing as how it applies to so many classes of people, all of whom he considers "slower" than he. Two, it shows Chris's lip-service attention to fitting into society, it sounds incredibly ableist, and is just a childish euphemism. Three, there's a delicious irony in Chris decrying students who are "slow in the mind" when his own mental aptitude is dubious.

In a number of responses from the Mailbag, Chris has explained that he finds the mentally challenged (especially those with physical deformities) creepy, likening them to zombies.[2][3] In June 2013, when someone on the CWCki Forums suggested that Chris date someone who was "mildly mentally retarded," Chris replied, "would YOU, in full honesty, full truth, in your right mind, at all, date a 'Special Girl'? How would you feel if you woke up the next morning with droning moaning and blather coming from the face next to you?"[4] Chris's bigotry extends to his fellow autistics — he speaks in incredibly cruel and derisive terms about the various mental and physical problems that are thrust upon these innocent individuals, whereas he, as a self-proclaimed "high-functioning" autistic, is pure and clean.

Despite that he seems to barely consider low-functioning autistics human, Chris often styles himself as a spokesperson for autism, making a stand against Asperger syndrome in the non-existent conflict between autism and Aspergers. This delusion is made most apparent in the CWCipedia article on Aspergers. It has been suggested that Chris says these things to make himself look good, and also to complain that he should be receiving the care and attention that those with Aspergers receive.

Chris seems to interpret the "high-functioning" part of his diagnosis as a compliment, giving him the best of both worlds: he can blame any of his shortcomings on his autism, but still console himself with the fact that he's "high-functioning" and therefore better than the "slow-in-the-minds". 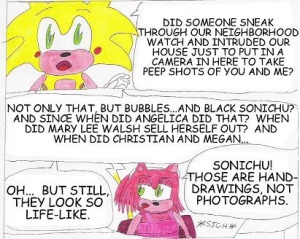 Sonichu is also a slow-in-the-mind

Chris's use of this term has evolved over the years. Early on, he pointedly distinguished between the "slow-minded" and himself. In late 2009 and onward, however, he began referring to himself as "a little slow" or "sometimes slow", once he discovered he could use it as an excuse for his many failings.