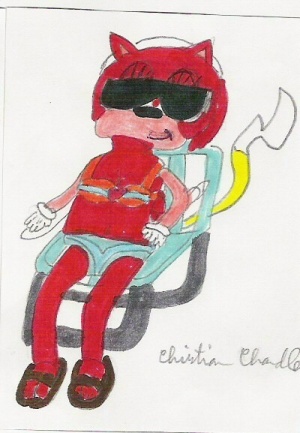 Rosechu is the name used for the predominately female-gendered specimen of Chris's imaginary species of Electric Hedgehog Pokémon. 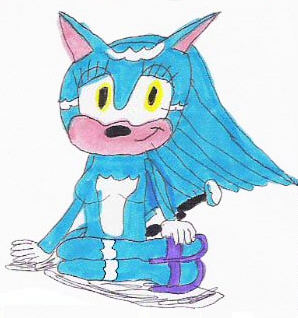 Rosechus, much like their (mostly) male counterparts, resemble certain video game hedgehogs in general appearance, with the females of the both species having longer and softer head-spines that superficially resemble human hair from a distance. The only distinguishing attribute is a slender and elongated tail with a very sharp tip; even so, not all Rosechus have this type of tail, some lacking one altogether.

Like Sonichus, they come in many forms recolors, but a typical Rosechu has pink fur, like its larval form. There may also be some other distinguishing characteristics, such as wings, tails, or drill hands, but generally the only things distinguishing one Rosechu from another are fur color and clothing choice.

Whereas Sonichus can fully retract their eyelids, most Rosechus always have their top eyelids slightly lowered, lending to the impression of a vacant look.

Certain Rosechus sport a visible navel. This is peculiar, as navels are present only among placental mammals, which Electric Hedgehog Pokémon are definitely not on account of them laying eggs. Navels are not universal among Rosechus; while Rosechu, Lolisa, Simonla and Zapina are seen having navels when their bellies are exposed,[1] the same does not apply for Angelica and Bubbles.[2]

Oh, fuck it, they all act the same.

Bride Rosechu, one of the infamous Basement Rosechus that Alec Benson Leary tried to breed with Asperchu.

Chris has loosely based the anatomy of the Sonichu and Rosechu's reproductive organs on those of humans and dogs. A Rosechu's vagina is normally hidden from view by a flap of skin, which recedes during urination, sexual arousal, or a "psych-up" attack. Rosechu's nipples appear only when aroused, "for sensual massage" (This implies that a Rosechu must be sexually aroused to feed her own young). Rosechus possess a "V-shaped pouch" behind their vaginal opening, which apparently serves the same function as a uterus.

First-time sex may be painful for Rosechus, even causing them to bleed from their hymen, but it soon begins to feel like "a sensual massage." If impregnated, the resulting zygote is gestated within the mother Rosechu for "a few months", after which the Rosechu lays an egg outside of her body, and must keep it warm until the infant Sonee or Rosey hatches. This indicates that Rosechus are some kind of monotreme, despite the fact that mice and hedgehogs (upon which Pikachu/Raichu and Sonic are based) are placentals. However, their biology is inconsistent, as the original Rosechu is depicted menstruating in Sonichu #10, a function found only in primates. Also, egg-laying mammals lack nipples, and nurse their young by sweating milk from the pores of their skin. These may be down to a unique quirk in the reproductive system of Rosechus, though is it at all likely that Chris would ever put this level of thought into anything?

Chris has mentioned that a Sonee is born as the result of intercourse between a Sonichu and a Rosechu, or some combination of the above and a Ditto Pokémon. It is never explained how a Rosechu and a Ditto would copulate, but presumably the Ditto would mimic a Sonichu.

The gestation time of a Rosechu pregnancy is unknown; however, Sonichu and Rosechu's two eldest offspring — Cerah and Christine — were born on 29 June and 6 October 2006, respectively. Robbie, the couple's third hypothetical child, was born on 26 February 2007. Given that there are 99 days between the first two dates, and 143 between the latter two, any of several things can be hypothesized: 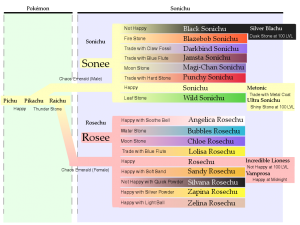 You would be forgiven for finding this confusing.

Chris seems to hold a rather strange view on evolution. It is largely based on Pokémon. When hatched from their eggs, Rosechus are born as a Rosey. This infant Pokémon can already have a certain sub-type; Angelica, for instance, was born as a white rosey with a Flying subtype. After being nurtured for some time, the Rosey then tends to evolve into their Rosechu-form. The path of evolution beyond Rosechu is unclear, although, when the Rosechu is brought in contact with a Moon Stone, the creature can evolve into a Vamprosa. It's worth noting that, like their male counterparts, no evolution of Rosechu occurs due to straightforward leveling: all require a held item or evolution item and most some level of Happiness. Garden variety Rosechus have the simplest path and just need to be happy when they level.

When Chris finally created a CWCipedia article for Rosechu, he included an extensive (and confusing) evolutionary path for Rosechus as a species. Curiously, while most of the Rosechus shown in the comic have some kind of subtype from birth, Chris's ramblings imply that all Roseys start without a type, and only acquire one through external sources (such as being exposed to a Moon Stone or the other bullshit that can force a Pokémon to evolve in the Pokémon franchise). (The latter may be a convenient explanation for Sandy Rosechu, who was born without a subtype and evolved into a Ground- and Bug- type, presumably losing her Electric type.) He also retcons the evolution into Vamprosa to say that one merely gets a Rosechu to highest level happiness and then level up between midnight and 12:05 am. Chris clarifies that this scheme would only happen if Rosechus ever become integrated into the Pokémon series.

Another evolution for Rosechu is The Incredible Lioness, better known as the PMS Monster from Sonichu #8 that face-raped Jason Kendrick Howell. Seemingly analogous to Ultra Sonichu, rather than gaining power from exposure to Chaotic Crystals, Rosechu simply gains tremendous strength through stress, closer to the Incredible Hulk than anything else. Because she's a woman she can't control herself when she gets into a rage, and the only way to calm her is to tell her that she's pretty, or whatever bullshit Chris means by "make amends with deepest apologies, heavy flattery, and promising to do as she wishes". The process also completely destroys her clothes, and she has to have the foresight to know she's about to go into a blind, unstoppable rage and removes the clothing, or just put on some makeshift clothes later to compensate. This serves no purpose than an excuse for Chris to draw Rosechu stripping, as the "transformation" consists of little more than her eyes turning red and her hair growing, neither of which should destroy or otherwise damage her clothing. The fact that she even needs clothes is a bit of an odd point, since several of the Rosechus never wear more than shoes, so a lack of clothing hardly seems to be an issue for the species. Chris also clarifies that only the TRUE and ORIGINAL Rosechu can transform[3], meaning if Bubbles Rosechu gets really pissed at someone she's just shit out of luck. 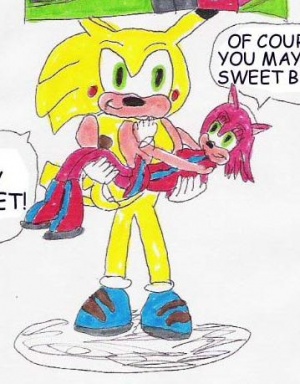 Rosechus are, on average, shorter than their male counterparts.