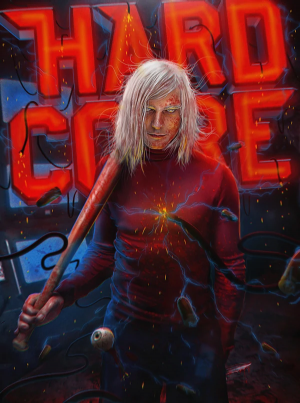 Whenever this motherfucker walks into the room, Carpenter Brut music is said to start playing.

Akan (Russian: Акан) is the main villain of the 2015 action film Hardcore Henry and a villain introduced into Sonichu by the Idea Guys.[2] He is a Russian billionaire and crime lord with powerful psychic abilities. Akan is significant for being the first major Sonichu antagonist to not be associated with Count Graduon or the PVCC. As of the end of Sonichu #13, Akan is apparently the only villain introduced in the story that is still active, the others either being subdued, destroyed or redeemed. Inexplicably, Chris also believes Akan will conquer the My Little Pony universe, and then our own, should the corporation Hasbro reboot the franchise; this serves as a partial justification for his ongoing protests of My Little Pony Generation 4.5 and the inevitable arrival of Generation 5 that will soon follow.

Akan was most likely added to the comic because the Idea Guys had an obsession with the video game Payday 2, which featured Akan in a cameo role as part of a cross-promotional event for Hardcore Henry.

Akan is featured in Red Forest, one of the audio clips mixed by the original Idea Guy in order to influence Chris's beliefs. In it, John Yamada (Idea Guy's character) and some of the Hyperdimension Neptunia goddesses are attacked by Akan; the audio composed of voice clips taken from various media.

Akan, alongside Monika from Doki Doki Literature Club and several evil CPUs from Hyperdimension Neptunia, launched a full-scale assault on the city of CWCville in 2018, with Akan being backed up by an army of Russian mercenaries. Throughout his brief time in the comic, Akan is shown to have powers and abilities similar to Chris, making him somewhat of an evil counterpart to him.

The invading forces were able to take over the Subdivision Area of CWCville, with Akan taking over the CWCville Shopping Center and imposed a puppet mayor through whom he could rule. Chris destroyed the mall with a nuclear explosion to thwart Akan. Shortly later, Chris restored the mall and all the people in in, save for Akan, assuming he was dead. 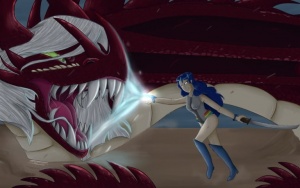 However, Akan survived and shortly after, moved in to the C-197 version of Chris' home just to vandalize it. This enraged Chris, who sent the CWCville Defense Force to find and captured him. However, he escaped and vanished from the comic thereafter. Later, Magi-Chan tells Chris that Akan has been posing as Godjesus to people in visions to manipulate and confuse them. This leads Chris to conclude that his previous "visions" from of God speaking to him were actually Akan fooling him. This revelation is one of Chris' major motivations for renouncing Christianity and worshiping the "CPU Goddesses" from Neptunia.

Akan's current whereabouts and status are unknown, though it's likely he is still active. With Count Graduon becoming a good guy, it's possible Akan may take his place as the main antagonist of the comic. It's briefly mentioned in Sonichu #13 that CWCville has problems with gang wars between the Yakuza and Russian Mafia. It's possible Akan is connected to the Russian Mob.

Chris maintained belief in Akan after the ousting of the Idea Guys. In August 2018, reacting to news that Hasbro would reboot its My Little Pony franchise, Chris tried to convince the corporation that if they proceeded, Akan would be able to conquer Equestria, a setting in the My Little Pony franchise, and then use his powers to plant subliminal messages to manipulate reality.[1]

Hasbro did not respond to Chris's pleas.

Akan as a coping mechanism

Though the idea that Akan was imitating God may have originally come from the Idea Guys, Chris is still 100% convinced it really happened and uses that as the reason none of his "visions" from God ever came true. This is quite clearly a way to maintain his delusions of grandeur and supernatural importance despite their contradictions to reality. God appeared to you but told you the wrong thing? It must be a supervillain posing as him! It couldn't possibly be that you were just imagining it all, or that you don't really have magical powers and aren't part of a magical prophecy! The most logical explanation is that an evil Russian crime boss with magic powers is secretly after you!

The Akan theory allows Chris to maintain his fantasy of godlike-power and importance without having to question why his predictions never seem to come true. It's also sad to know that a villain from a gimmicky action movie inspired someone to renounce their religion.

In recent years, however, Chris has stopped referring to Akan altogether, possibly due to the influence of the Idea Guys fading.