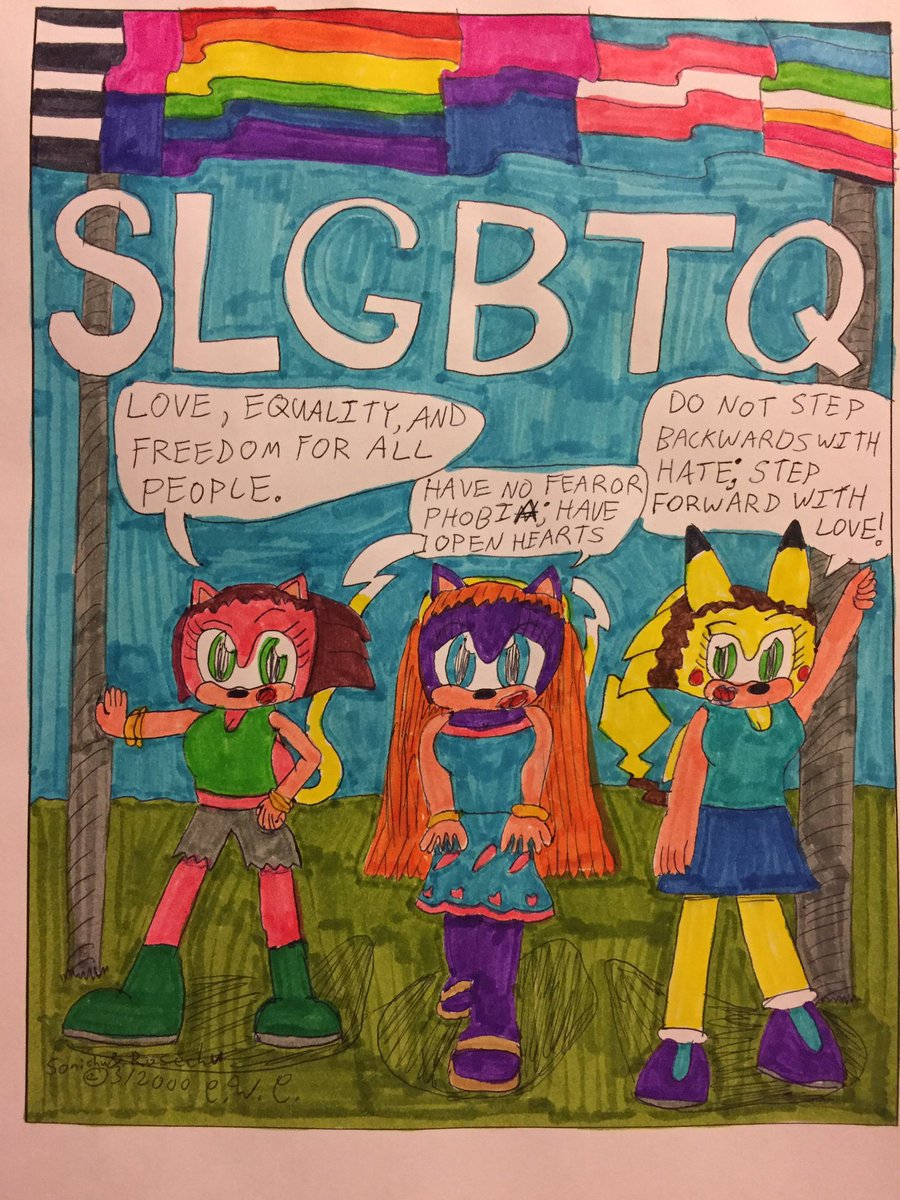 Chris's poster celebrating SLGBTQ pride. He brought this poster with him to UVA Remembers Pulse. Note that the flag for Heterosexuality, a white flag with black stripes, is the first flag of the set when viewed from left to right.

SLGBTQ is a CWC-ism variant of the more common acronym LGBTQ, an acronym for "lesbian, gay, bisexual, transgender and queer". Chris coined his variant on the term sometime in April or May 2017 but did not explain the reasoning behind his alteration until a Facebook post on 21 May 2017. He has since used the term consistently in contexts where most people would use the more conventional acronym, cementing its CWC-ism status.

The "Q", for the blanket terms "queer" or "questioning", is a reasonably common addition by modern activists though less widespread than the core "LGBT". Chris paid fairly little attention to the letter in his explanation; he likely picked it up from organizations such as the Human Rights Campaign or Cville Pride, both of whom routinely include it. More notable is Chris's inclusion of an "S" for "straight", which he explained as being to welcome non-LGBT(Q) people "with open hearts". As straight people make up the vast majority of the population, Chris's new acronym covers almost everyone (with the notable exception of asexuals)), thus defeating the purpose of identifying LGBTQ people as a minority group with common attributes.

Chris is evidently unaware that many in the LGBT community frown upon the inclusion of straight people in the acronym, with most preferring to use the letter 'A' in the extended acronym "LGBTQIA+" to refer to allies of all kinds, including straight people; they would almost certainly object to offering heterosexuals the first letter. A tweet using the phrase was in fact called out by such a "social justice warrior" (as well as notorious A-Log Michael Hirtes) for this exact reason.

With Chris's increased interest in the "SLGBTQ" community, he has made artwork and writing supporting the community, culminating in the observation of CWCville's first SLGBTQ pride event in Sonichu 12 - a marked change from Chris's statements in the comic advocating criminalizing and later curing homosexuality eight years earlier. The comic even shows a change in his particular dislike of gay men, as it features Chris's comic persona apologizing to Reldnahc Notsew Naitsirhc for hating him based on his orientation (though Chris immediately follows this up with an apparent gay joke when Reldnahc goes to "choke down a relish dog with mayo"). However, the pro-SLGBTQ statements in Chris's works predictably tend to be heavy-handed and insubstantial. It is also unlikely that Chris's views would have changed had he not joined the community himself.

According to a letter from October 2021, Chris has stopped using the "SLGBTQ" acronym.