Reldnahc was originally introduced as a member of Team Rocket and the creator of Black Sonichu, but the mystical powers unleashed by Christian's discovery of the Anchuent Prophecy revealed to him his true nature and his ability to transform into Reldnahc Ha-Taque. To this day, he is still demonstrably straighter than Chris.

Since discovering that he is the opposite number of Christian, Reldnahc has embraced anything that is anathema to the Mayor of CWCville. Most notably in this regard, for many years up until Sonichu #11 Reldnahc was the only openly gay male character in Sonichu [5] (fun fact: Chris lets Reldnahc point out that they differ because of his openness, not his homosexuality).[6] 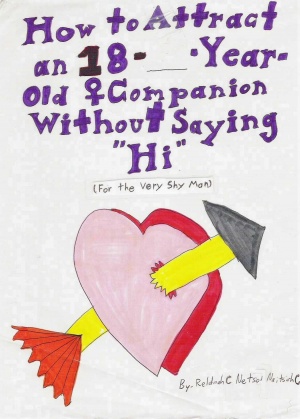 Although little is known about how Christian developed the character, it can be assumed that the idea of spelling his own name in reverse for the name of a villain immediately appealed to his colossal narcissism. Reldnahc debuted in Sonichu #0 as the son/lackey of Team Rocket boss Giovanni, belying his greater significance to the Sonichu canon. However, Chris appears to have always colored the character's eyes red and orange (in contrast to his own green and blue eyes, the former two being the opposite of the latter two on the color wheel), foreshadowing his later role as Chris's dark reflection. It should be noted that Silver, the rival character of Pokémon Gold and Silver also has red hair and is Giovanni's son. Chris claimed to be unaware of this, and has said that Naitsirhc is adopted.[7]

Much as Crystal represents Christian's inner speculation about what he'd be like if he were female, Reldnahc clearly represents what Chris thinks would happen if he surrendered himself to the temptations of sexual deviancy. Chief among these temptations is, of course, homosexuality, but also of note is Reldnahc's penchant for partial nudity ("Put a shirt on!"), torn jeans, unusual body piercings, and willingness to ejaculate wherever he pleases. According to Chris, Reldnahc's costume in Sonichu #6 is based on that of Key, a bishōnen J-rock star in Excel Saga, whose sexuality unnerved Chris.[8] 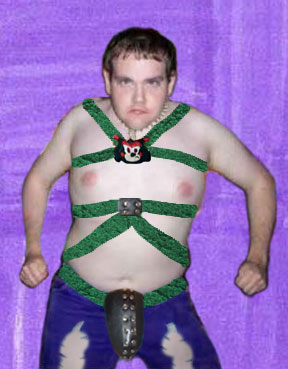 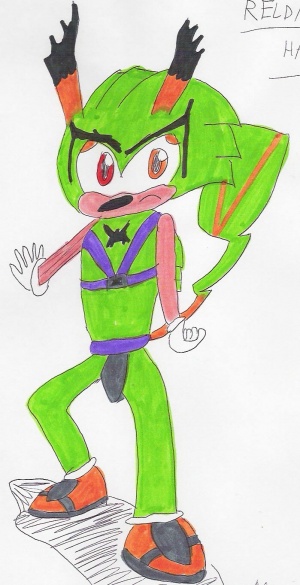 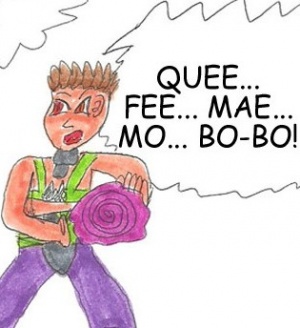 Naitsirhc restyled himself as "Reldnahc Notsew Naitsirhc", now possessing the same abilities as Christian, including the power to transform into an Electric Hedgehog Furfag form, Reldnahc Ha-Taque (by invoking the words "Dark Shocker Power"), and the ability to fire the Curse-ye-ha-me-ha's evil twin, the Quee-fee-mae-mo-bo-bo[9], whatever the fuck that's supposed to mean. He also gained a powerful healing factor Chris likened to the DC Comics character Deathstroke. This prevented him from receiving any of the side effects associated with alcohol and tobacky, which he frequently used.[1] While Christian and his allies were discussing the need to obtain the Sonichu Balls to rescue Crystal, Black Sonichu and Reldnahc broke into a jewelry store at the CWCville Mall to steal one of the precious Balls. In their respective hedgehog forms, Chris and Reldnahc fought a lengthy, strenuous battle at high-speed, culminating at Manchester High School, where the unexpected return of Bionic the Hedgehog saved Christian from certain doom. A blow to the head from Bionic's basketball knocked Reldnahc against the gymnasium bleachers, leaving him in a coma for ten weeks. Upon recovering, Reldnahc swore revenge against Bionic.

Naitsirhc was next seen attending a conference of the enemies of Christian Chandler, held to discuss plans following Christian's disappearance in the time void. He was among a group of evil Electric Hedgehogs that terrorized the city, along with Silvana and Wes-Li. During a confrontation with Bionic, he attempted to get his revenge with an embarrassment curse, but Bionic was somehow able to grab the ethereal energy like a basketball and throw it back, causing Naitsirhc to piss and shit his pants. He retreated in embarrassment, vowing vengeance again. For whatever reason, Chris is really playing up Bionic as a rival to Naitsirhc; if he's put any thought into this at all, it might be because Sonichu #9 ends with Chris writing himself out of the comic, supposedly forever. Although he's back in Sonichu #10, with an even bigger plot significance than ever before.