Kellie "Kel" Felix[1][2] is Rosechu's original trainer. Kel was only seen in Sonichu #0 and Sonichu #10, and was briefly mentioned by Rosechu in Sonichu #7. If you have any information pertaining to her current status and location, please contact your local police department.

It is believed that she is loosely based off Chris's real-life gal-pal Kellie Andes. This is furthered by the use of "Kellie" in "Sonichu & Rosechu… The Genesis of the Lovehogs", Sonichu #10 and the CWCipedia.

Of note, she is the closest Chris has gotten to an original creation in the Sonichu canon. Although likely inspired by Kellie Andes, she does not resemble her physically or in personality. 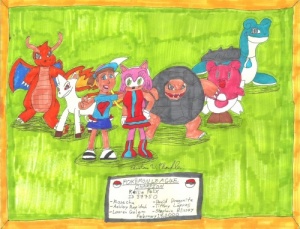 According to the Rosechu biography page[1] on the CWCipedia, Kel had gotten the Pichu who would become Rosechu from Professor Cole due to her being the last one there. This is a rip-off of the first meeting between Pokémon anime protagonist Ash Ketchum and his first Pokémon, Pikachu. Unlike Ash and Pikachu, Kel and Pichu hit it off quite nicely.

Her initial Pokémon catches include a Dratini, a Ponyta, a Lapras, a Chansey and a Geodude. It is said that the Pichu evolved into a Pikachu and she used a Thunderstone to evolve her into a Raichu. She was taking a break in her cottage on the day the Raichu became Rosechu. She tried to tell Professor Oak, who suggested that she try telling Cole, but he was on vacation.

When Rosechu met Sonichu, Kel took both of them to Professor Cole to examine them. After doing so, she also met Chris and battled him in a Pokémon Gym Battle, defeating him as well(!!). When Rosechu wanted to stay with Sonichu, Kel relented and allowed her to stay.

Kel would resume her travels, using a Manectric to replace Rosechu, but it is said that she still calls for Rosechu when need be. Her Pokémon Championship Hall of Fame picture,[3] awarded at the as-of-yet-untold-of end of her quest, shows Rosechu instead of a Manectric.

As stated in Sonichu #0, Kel is Rosechu's caring Pokémon trainer. Not much else about her is known.

Kel is one of the only trainers in the comic, the other being Naitsirhc, who no longer uses his Pokémon. She owns a Dragonite and briefly a (presumably female) Raichu until the rainbow turned it into Rosechu. Rosechu then maxed out Kel's credit cards and promptly ditched her to live with Sonichu. Chris has revealed that Kel released Rosechu to be with Sonichu, and that she is currently in "Trainer's College". In February 2010, Chris wrote details about Kel's roster, revealing that she owned David (Dragonite), Ashley (Rapidash), Tiffany (Lapras), Lauren (Golem), Stephanie (Blissey).

It should be noted that after Sonichu #0, Kel was almost completely written out by Chris (also noted how her introduction can be summed to "Rosechu's trainer"). This is made even more perplexing when one considers that Kel, actually having been the trainer of Rosechu while she was still a Raichu, was not given the chance to use Rosechu as her Pokémon and their relationship dwindled down to "BFFs". Chris, who had absolutely nothing to do with the creation of Sonichu and Rosechu in the comic canon, is considered Sonichu's "master" and occasionally called "father" by Sonichu (also called "father" and "papa" by Rosechu, which has lead some fans to believe there is some incest undertones going on. While the idea they call him "Father" as a god complex- the fact their children call him "Grandma" says otherwise.).

After a prolonged nine-issue absence, Kel reappears (not having taken the time to change clothes) in Sonichu #10 as part of the three-person firing squad that executes Sean, along with Bill the Scientist and Allison Amber. Caring indeed.

Kel and her men

Besides Rosechu, Kel was also the owner of David, a Dragonite. She once tried to offer him to a sad Rosechu to fuck, but when the latter told Kel to fuck David herself, the Pokémon trainer enigmatically replied that "she can't say she didn't try". It's worth noting that David is described as "loyal" and being "too big" for Rosechu.

Chris on CWCipedia elaborated on the fate of Kel, including revealing a short-lived romance with Reldnahc Notsew Naitsirhc:[4]

It should be noted that this was on the CWCipedia page for Sonichu since, as a woman, Kel isn't important enough for her own article. Chris may have an article for his fucking car, but it was only after prolonged pestering that he even bothered with one for Rosechu...

In Sonichu #10, it's revealed that Chris is attempting to restore Reldnahc to normal through the Straight Vaccine because, apparently, Kel misses him. For those who do not read the CWCipedia, the statement that Naitsirhc and Kel were sweethearts would seem completely out from left field. By making up a relationship on the spot, we see how the manchild attempts to evade responsibility for his Hitleresque eugenics ideas, trying to make it sound as if Kel is their initiator. This also shows a bit of how Chris just can't get over women, since Reldnahc is just an "evil" version of Chris, and Kel is just a "barely existent" version of Kellie Andes, whom Chris was deeply infatuated with. Just like how Chris lives out his fantasies through comic Chris, so too does he use Reldnahc as a means for letting some version of himself be with one of the dozens of women who tolerated Chris.

It should be noted that, prior to Sonichu #10, Kel and Naitsirhc never shared one scene or exchanged one line of dialogue. The only episode they were both in (minus the introduction page) was in Sonichu #0, Episode 3 – Naitsirhc rides his Legendary Pokémon, Raikou, off after Sonichu defeats his other Legendary Pokémon, Zapdos. Kel is seen cheering for Sonichu after he saved Rosechu. It can be inferred she never confronted him for kidnapping her Pokémon or causing damage to the city. When Naitsirhc transformed to his evil counterpart, he was in Giovanni's lab – nowhere near Kel –, though when Chris turned him straight, he teleported him to Kel's bed.