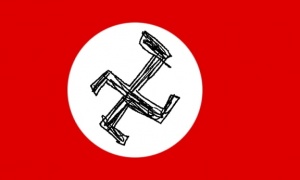 In Dimension 1218, Nazi Germany (or the Nazis for short) was an extremely influential, now widely-despised German state/political movement that played a critical part during the Second World War. In Sonichu, the Nazis are an insane time-traveling army of evildoers from another dimension obsessed with the eradication of all Pokémon.

They were included in the comic at the insistence of the Idea Guys, who convinced Chris everything in his comic was real and actually happening in another dimension. The Idea Guys were inspired to lure Chris to including Nazis in the comic due to their interest in Wolfenstein and Call of Duty: Nazi Zombies.[1] It was yet another example of how the Idea Guys sought to prove how much better they were than Chris, who put all of his childish obsessions in Sonichu, by putting their childish obsessions in Sonichu.

On multiple occasions, Chris expressed his hatred for Hitler and Nazis and even made a whoopee cushion with Hitler's face on it. Out of all plot points Chris was tricked into including in Sonichu, he notably hated the Nazis most and went out of his way to completely wipe their inclusion in the comic's history out of existence via time travel and magical deus-ex machinas.

Chris and the Nazis 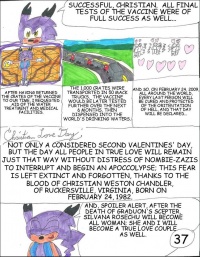 In May 2006, Chris won an eBay bid on a collection of German World War II photographs in a move to appease Megan.[2] Megan went on to assure Chris that she only thought of the soldiers as "unbearably handsome" because they were stereotypical soldiers, and definitely not because they were Nazis.[3]

In an inadvertent foreshadowing, on 28 November 2009, Chris answered a mailbag question from a user claiming to be from Germany. Assuming the name of a Nazi officer from the British sitcom 'Allo 'Allo!—leaving Chris none the wiser—the user asked Chris whether he would commit to a parody of Hitler in a future comic. Chris, repulsed, refuted such plans:

The next month, another user with a sly Nazi alias followed up on Chris's previous mailbag answer, asking why Chris would not use the word "swastika" when it has different connotations in different cultures. Chris's response: 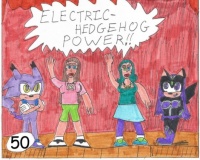 Once again, in January 2010, one "Dr. Josef Mengele" submitted a mailbag question, seeking Chris's opinion on his study of gay people. Chris's response showed that he identified similarities to the policies of Nazi Germany, but failed to realize that the good doctor was directly quoting said policies:

In 2011, on the 23rd of August 2011, Chris sang the song "Der Fuehrer's Face", from the famous Donald Duck short of the same name to mock someone he believed was one of his trolls. Chris is apparently a big fan of this short and its title song, as he often sings it unprompted and incorporates it into his Donald Duck impersonation, as also seen in his Son-Chu Review video released six years later. He even heavily referenced the song and its singer, Spike Jones, in a July 2015 posting and credited them as a source of inspiration. 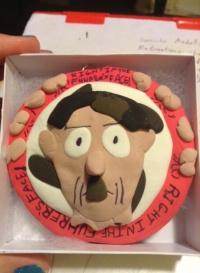 Those are meant to be asses, even though they look like small tumors or testicles.

In 2015—five years after the original publication—Chris revised Sonichu #10 to replace homosexuals with "nombie-zazis"; however, the story retains the "straight blood" as the cure for the threat. In July of that same year, Chris was commissioned to make a Medallion of Adolf Hitler. Chris was disgusted by the idea, but not enough to turn down the money. So, as a compromise, he made a medallion of Hitler's face surrounded by butts with disparaging comments inspired by the Spike Jones song "Der Furher's Face".[7] He posted pictures of his creation alongside a multi-paragraph explanation that he was a "good person" and didn't endorse Nazism.

Following BronyCon 2017, Chris continued to embrace the brony lifestyle by wearing his unicorn cosplay everywhere. That was until a peculiar event which occurred at his church, when he was handed a note by his pastoral counselor, asking him to remove the horn and ears. According to Chris, in the note, members of the congregation had compared the cosplay to the Nazis, which may have been confusion on Chris's part as the church was addressing the recent neo-Nazi rally in nearby Charlottesville. Despite the congregation demanding this for his own good, Chris interpreted this as a personal attack, and proceeded to write an open letter to one of the MLP voice actors for feedback – this was never addressed further.[8]

One of the images used by the Idea Guys to prove that CWCville had fallen to the Nazis. A moment which could have prevented a lot of grief, had Chris done a simple reverse image search.

When the Idea Guys came into power, they implemented numerous references to Nazi Germany with varying degrees of discretion.

Early in the saga, the Idea Guys convinced Chris that Akan and his Russian forces had invaded CWCville, kidnapping Sylvana. In response, Chris launched Operation BARBarossa—an obvious portmanteau of the failed German invasion of the Soviet Union and Chris's mother—to rescue her.[9] Ultimately, the campaign was a success. In the aftermath, in an epilogue that would concern anyone of reasonable intelligence, Chris remarked that CWCville Chris had initiated the "Fine Ol’ Solution" to place the villains of the battle into prison camps with "large ovens to keep the people warm" and "some of the best showers a prisoner can ask for."[10] The next month, he announced that the Trollbusters (presumably alongside other groups that defended CWCville) were being consolidated into a much larger defensive force, known as the "CWCStapo", an obvious play on the "Gestapo" that completely went over Chris's head.[11]

In January 2018, Chris warned that the Nazis had infiltrated C-197. From an outsider's perspective, the Idea Guys had succeeded in tricking Chris of the Nazis' presence in part by using images from alternative fiction such as Wolfenstein and The Man in the High Castle.[1] With the looming threat of Nazis, Chris was prompted to create two videos with obvious scripting/orchestration from the Idea Guys:

In the first of these videos, "Smashing", Chris was tricked into smashing a beloved comfort doll into several pieces under the belief that it had been bugged by Nazi secret agents. In the second of these videos, "Get Out, You D*** Nazis", Chris violently shakes a Christmas tree while cursing the Nazis for invading Equestria and vowing to kick them all out. At the end, Chris spouts a bunch of pointless non-sequitur lines presumably scripted by the Idea Guys.

For the reference drawing of Perceptor Sonichu, Chris explained that one of Perceptor's goals is to hunt down the Nazis and their technology.

In a probable Idea Guy move, Chris claimed that his virtual/fictional band, Christine and the Hedgehog Boys had written a song called "The Nostalgia Critic Did Nothing Wrong!", in reference to Doug Walker's controversy at the time. This was clearly a further reference to the "Hitler Did Nothing Wrong" meme, devised by 4chan. [12] 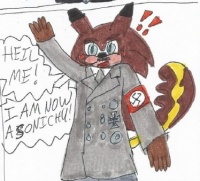 Nazis were occasionally alluded to before the events of Sonichu #13. Beel, in a previous life, was the "Main Assistant" to Adolf Hitler, which probably meant he was the guy who fetched Uncle Adolf's cigars and coffee while the adults did their business. After his death, he was cursed with a demonic form and forever punished by working menial, dead-end jobs for companies like 4-cent_garbage.com.

Nazis played a major role in the events of Sonichu 13. The Idea Guys managed to convince Chris that they had invaded CWCville by pointing to the real-life right-wing Charlottesville protests, claiming this was an example of C-197's events bleeding into our reality. Initially, the Nazis appeared in an alternate timeline where an immortal Adolf Hitler was given a Sonichu Medallion by a Nazi-aligned alternate universe version of Chris. The "real" Chris, enraged by this, took his medallion back, causing Hitlerchu to turn to dust.

Later in the issue, CWCville is devastated by a massive war with the rival micro-nation of Australatina, splitting it into two halves. Nazis from an alternate timeline invaded C-197 and annexed Australatina, which was sympathetic to their cause. The Nazis went on to capture nearly all of the "destined" Sonichus and Rosechus and systemically kill all wild Pokemon outside CWCville's borders, declaring them all to be "impure." Chris recruited multiple fictional characters, his own Pokemon, and the My Little Pony villain Discord to help him kill Nazis, as CWCville's standing military had been entirely wiped out during the war.

Chris, using his magical Deus-Ex Machina powers, took a drop of his blood and used it to infect all the Nazis, turning them into Sonichus. This devastated the Third Reich, as it rendered their ideology moot. Small pockets of the group continued fighting, even building a Rosechu rape camp and impregnating all of the fertile women of the comic to produce more soldiers for the fight, but they were slaughtered by Chris, his pony OC and an idea guy.

Though the Nazis were defeated and erased from C-197, the damage they did still lasted long after their fall. Magi-Chan and Sonichu both had mental breakdowns due to the PTSD inflicted by the war, the former accidentally causing a tear in reality that nearly destroyed the universe and the latter shooting up the CWCville mall before trying to rape Chris.

Chris was utterly disgusted by the inclusion of Nazis in his comic, so much so that he still felt the need to bitch about it in Sonichu 14's opening text crawl. Chris then used his magical CPU goddess powers to purge all remnants of the Nazis and their reign from CWCville's past and present, though they still existed historically, as shown in the pages of Sonichu 16 that states Count Graduon fought against the Germans in both world wars. (How this is possible when he was trapped in a giant stone statue built by Native Americans is anyone's guess.)

The Nazis and their proxy state, Australatina, were by far the most powerful and dangerous villains in Sonichu canon, doing far more damage and posing a much greater threat to the heroes than any other. This can probably be attributed to the fact that they were written by the Idea Guys and not Chris. This serves as a poignant allegory for Chris and Reality. The problems and enemies of Chris' fantasy world are easily managed and defeated, but when reality is introduced in a way Chris can't avoid or deny, its extremely destructive. Chris turning the Nazis into Sonichus ties this allegory in a neat little bow: the threat is neutralized by becoming part of his delusional system instead of intruding into it. 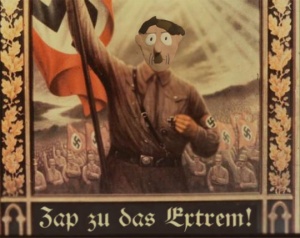