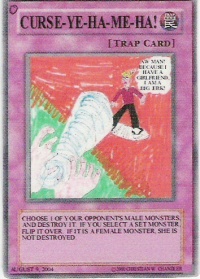 The Curse-ye-ha-me-ha, also referred to as Shin-ye-ha-me-ha, is the special finishing move of doom used by Chris when battling his unfortunate adversaries - be they jerkops, manajerks, trolls, or Mary Lee Walsh.

It is performed exactly the same way as the famed Kamehameha maneuver used in the anime series Dragon Ball and it's sequels: by doing silly choreographed poses and slowly yelling the name of a famous Hawaiʻian king. It's also possible that Chris was inspired by a scene in Excel Saga, where the characters at one point perform a "Nabehameha"; a parody of the Kamehameha named after the series director, Shinichi "Nabeshin" Watanabe. If not directly inspired by Excel Saga, it likely at least caused Chris to think of deriving his own version of the famous attack.

And before you ask: yes, Chris has done this in public and actually thinks that he has the power to do this.

In keeping with the Kamehameha maneuver he stole it from, the Curse-ye-ha-me-ha must be delivered slowly, with each syllable deliberately pronounced as the user summons his chi, finally ending with the last "ha!" and a blast of power followed by peace for the troll, jerkop or manajerk. For optimal results, say it like the second narrator of the audiobooks says it.[2]

When desired, the Curse-ye-ha-me-ha generally acts as a standard energy blast to vaporize enemies. However, in other situations, the attack has no immediately apparent effects. Therein lies the "curse" — the attacker has subtly hexed the victim, guaranteeing that he will soon suffer unbearable misfortune.

While negotiating the production of Sonichu video games with Nintendo, Shigeru Miyamoto informed Chris that "curse" is considered offensive in Japanese culture, and so all references to the spell have been changed to "Shin-ye-ha-me-ha." By August 2009 Chris had become more willing to revert to the original name when sufficiently angry.

A less theatrical version of the move, the Curse Shot, is delivered by simply holding out one's hand in the shape of a gun and miming the act of shooting the target. This achieves the same sort of ominous misfortune without requiring several minutes of preparation, which is handy if you happen to be running away from mall security. This may or may not be inspired by YuYu Hakusho, another anime series that aired on Cartoon Network, where the main character's signature attack was a similar move known as the "Rei Gun" (lit. Spirit Gun). On a few occasions, he has performed a variation on this theme using his Megatron pistol.

Aside from creating the impression that Chris has delusions of godhood, the Curse-ye-ha-me-ha allows him to feel some sense of control over his world. Chris is too weak, stupid, and cowardly to directly act against those who give him stress, but his curses require no effort from him except his own faith in their power. As long as it is impossible to prove the Curse-ye-ha-me-ha has no effect, Chris can allow himself to believe the universe will ultimately destroy his enemies, giving him a sense of triumph.

However, it seems to have two different effects within the comics. First officially seen in Classic Sonichu Strip 3, Curse-ye-ha-me-ha seems to be the finishing move similar to Dragon Ball. However, within the same issue, in Sub Episode 1, the move is used on the Jerkhief, and is said to lay a curse on someone, unfairly ruining their life- causing the character to slip on a random banana peel, shattering his glasses, and his wife suddenly leaving him just for his smoking habit, taking his children and all his belongings without a court case.

Later in the comics, Chris is seen again using the move in a combo attack with his sister's "shocking tiara magic". This causes the W-M-Manajerk's head in a jar to become detached from his robot body. The Manajerk does not seem to be cursed or suffering from random bad luck. The move was simply a finishing move.

The move within the comics only seems to now be a finishing move - so its real purpose is up for debate.

Yes, he actually does this in public

In addition to his performance of the Curse-ye-ha-me-ha at Wal-Mart, key slanderous trolls have revealed that Chris performed the curse live and in person in the office of Mary Lee Walsh, resulting in his suspension from PVCC.[4] A documented performance of this attack has been recorded and it is shown in this video.

Yes, he actually thinks this works

Chris actually believes he has magic powers to curse people. Chris, as usual, fails, this time with confusing correlation and causation - just because Mary Lee Walsh's reputation "went down" (presuming of course that this even happened; we only have Chris's extremely biased word to go by), it does not necessarily follow that it's a result of a curse-ye-ha-me-ha attack. This appears to stem from his inflated sense of self-importance: because he sees himself as an innocent man, he seems to believe that God has granted him magical powers with which to curse those who dare wrong him, a good example of his detachment from reality.

The following excerpt from the Katie Bay e-mails describes his process of emitting a Curse-ye-ha-me-ha:

It must be reiterated that Chris genuinely thinks this works. 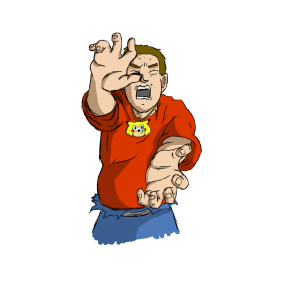 A still-life portrait of Chris performing the attack.

In the comics, Chris applies the Curse-ye-ha-me-ha to Mary Lee Walsh and to the Jerkhief, and these stories may reflect the two known public instances, or separate incidents, or purely wishful thinking. The curse seems to have had no effect on Walsh, even in fiction; after being seemingly atomized in Sub-Episode 3, she simply returned none the worse for wear.

On 15 January 2009, Chris digitally delivered a Shin-ye-ha-me-ha via YouTube to every troll who has contributed to his Encyclopedia Dramatica page and to 4chan.

Liquid Chris, the dreaded brown-striped impostor, was on the receiving end of a Curse-ye-ha-me-ha in a 14 August 2009 video. His subsequent disappearance was attributed by Solid to the extreme bad luck which resulted from the curse.[5]

However, on 16 August 2009 Chris elected to lift the curses he had previously unleashed, and performed the "Forgiveness Blessings" in a video to demonstrate his grace. During this retraction Chris claimed to have used the Curse Shot on over fifty men during his Love Quest. Later on during the same day, Chris would also specifically retract the curse placed upon Liquid.

Due to the production of Audiobook DVDs, Chris has cursed Vivian Gee and anyone involved with the project.

On 1 February 2010, Chris cursed Mao Ling, operator of the Asperpedia, in response to a series of offensive advertisements on the CWCipedia. He was later coerced into delivering an insincere forgiveness blessing, which apparently freed all others afflicted with his curses from further humiliation and bad fortune.

On 2 March 2010, Chris performed a Curse Shot on Surfshack Tito in response to his PSN account being hacked yet again. This comes after Chris said that cursing people was evil, and that he would atone for it. Hypocrite.

On 5 October 2017, in CLog 10042017 - Q&A NO MORE!!!, Chris performed an action resembling the Curse-ye-ha-me-ha while cursing the entirety of the Kiwi Farms troll forum. This is the first known time that Chris has done this since transitioning.

On 2 October 2020, Chris actually denied Ben Saint's claims that he cursed Donald Trump right after news got out that he contracted COVID-19. Chris also said that he prophesied that Trump would not die of the virus, which did turn out to be correct, although it's needless to say that Chris had nothing to do with it.