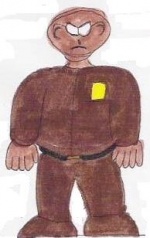 Jerkhief (pronounced [ˈdʒɝ.kiːf] "jur-keef"[1]) is the black leader of the Jerkops known best for uttering nonsensical phrases such as "My wooden badge was delicious!" or "MY SOUL HURTS!" in Sonichu #4. Jerkhief is based on a real-life mall security guard who chased Chris out of the mall for having his Attraction Sign on full display and apparently creeping out the people in front of GameStop. Chris has put Jerkhief's weight at three-quarters of a ton, failing to understand that someone that obese would barely be able to move.

In Sub-Episode 1, Jerkhief interrupted CWC's Love Quest and told him to stop soliciting like any sane person would. Chris was adamant about his quest and refused to leave. So, he beat up a bunch of Jerkops, but then Jerkhief activated his mecha battle armor. Unfortunately, he could not overcome the power of Chris-chan Sonichu. This whole "Jerkop-Tastropie" took place in CWCville Shopping Center.

As Chris has noted, the character design for B-Manajerk gives him a face quite similar to Jerkhief.

"My wooden badge was delicious!" 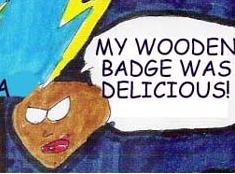 The famous quote in question.

This quote, seen on the cover of Sonichu Issue #4, is an infamous case of Random-access humor that has utterly baffled readers of the webcomic. Eventually, someone was courageous enough to ask Chris what the hell this line was about in an IRC chat and Chris explained its meaning:

This is backed up by Sonichu Issue 4, pages 55-56. Even with the explanation, it is strange for Jerkhief to compare the taste of tree bark to a sweet treat.

When a troll recorded himself destroying the Sonichu Medallion, he recited the line for no apparent reason, but did so with a smug sense of satisfaction as he showcased the thoroughly demolished Relic of Fail at the very end of the video.