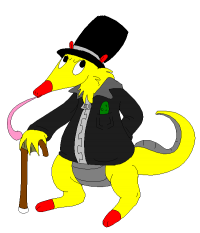 Reginald the anteel, in all his bizarre glory.

In August of 2008, Chris excitedly endorsed a new blog that was supposedly the official journal of JK Productions, a company claiming to be developing Sonichu: The Game. Juxtaposing "screenshots" of absurdly basic in-game features with artwork that was far superior to the source material and annotated by a hyper commentary, the blog was nonetheless shrewd enough to convince some (including Chris) of its authenticity.

That was until September, when, on the basis of an alleged cease-and-desist order from Nintendo and Sega, pickle-happy pictures of character redesigns were premiered. Sonichu was replaced by "Reginald" (also the name of Chris's imaginary son), an upper class anteater/eel hybrid. Rosechu was similarly replaced by an "anteel" – specifically, a Hard-Gay-inspired, boner-sporting anteel. Finally, Chris-Chan himself was replaced by a skankily dressed female reimagining which he no doubt fapped over.

Shortly thereafter, JK Productions claimed to have broken ties with Chris altogether, in disgusted protest at the Spring Break Issue;

Chris was left to sheepishly admit to being trolled and return to harassing Nintendo executives. 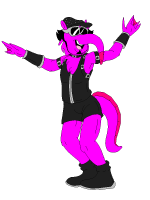 On 17 August 2008, Chris updated his website that was previously dead for a year with a new entry echoing the demands of his latest video, in which he calls for all the Sonichu fans to storm Nintendo and Sega with requests that his character be given official merchandise. He also promises the finale to this season of Sonichu within 6 months, and a new series starting next year.

Normally this may seem a trivial update in the adventures of CWC. However, with this post he released a new blog dedicated to Sonichu: The Game (at http://sonichugame.blogspot.com, now deleted and not archived) made up of mostly "fan art", with a few of his own pictures accompanying updates to the game's progression.

"Chris Spent over 9,000 hours in ms paint to provide us this diagram of a ps3 controller."[citation needed] ... "image courtesy of Christian Weston Chandler. Behold! The home entertainment controller, perfected."

On 5 September 2008, the official Sonichu game blog revealed what many people had suspected: that it was the work of an elaborate troll. In a post claiming that SEGA and Nintendo had slapped "production" with a cease-and-desist order, the resident blogger offered his redesigns of Sonichu and Rosechu; an upper class and a Hardgay impersonating anteater/eel hybrid respectively. That Chris would condone such radical alterations of his 100% totally original characters is enough to raise eyebrows, but a more-than-fleeting inspection of "Reginald" – Sonichu's reimagining – shows that he is armed with that appendage Chris dreads most, i.e. a pickle. Oh, and Rosechu's equivalent has a beard and a boner, I suppose that's worth mentioning as well. A follow-up post was submitted on 6 September 2008, featuring a redesign of the big CWC himself. Chris is convinced that JKProductions was not a troll and continued to endorse their blog as the "Official CWC Approved Sonichu Video Game Blog" on both his website and YouTube account until the demise of the former. He has never had the faintest idea as to what "JK" stood for.