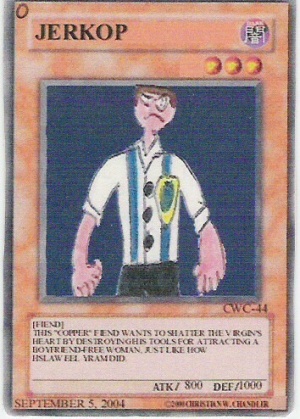 A Jerkop is a mall security guard, police officer or prison guard. The word itself is a portmanteau of "JERK" and "cop". Female Jerkops are sometimes called Janekops.[1]

In the Sonichu comics, Jerkops serve as the villainous private army of Mary Lee Walsh and Count Graduon, with Sonichu liberating them from the former's control in Sonichu #10. 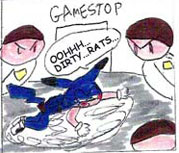 Standard Jerkops watch some shitty recolor levitate in a 2004 short.

Chris would later elaborate on the Jerkop uniforms on the CWCipedia. White uniforms were for low-class Jerkops, such as new recruits. Red uniforms were for an intermediate rank, possessing "Good Amount of Expierences and Combat Skills." Finally, brown uniforms were for the highest class, including Jerkhiefs and Jerkop Daitenzen such as Bagget.[2]

In Sub-Episode 4, "McAttack Part 1", B-Manajerk explains that the Jerkhief informed him of Chris and his Love Quest. To help the Manajerks at Mal-Wart defeat Chris, the Jerkhief sent a pair of Mecha-Jerkops to help the B-Manajerk, and his partner, the Merried Seinor Comic. Before the Mecha-Jerkops could act, however, they were cut down by the sword of Darkbind Sonichu, who had come to help Chris battle the Manajerks.

While a common misconception holds that Chris essentially delivered a verbose "Fuck tha Police" through the Jerkop characters, he clarified in Sonichu #5 that brown (mall security) is wrong, while more common black and blue (police officers) are TRUE and HONEST. A lot of what Chris wrote about the Jerkops was a feeble effort to undermine the authority of private security staff by comparing them unfavorably with the police. So in mocking the Jerkops' "cracker" badges and hyping "the true police people", Chris ironically put the police on a pedestal.

That said, Chris held a very narrow definition of a "true" police officer. When describing the origins of the Jerkops on CWCipedia, Chris again pointed out that they wore uniforms "OF COLORS OTHER THAN BLUE OR BLACK." This seemed to be a major sticking point for Chris. As far as he was concerned, the color of a cop's uniform provided the sole signifier of his authority, even though many police officers wear brown or white uniforms (or plain clothes when undercover) whether Chris approves or not. Brown is also a popular choice for county police and sheriff's deputies' uniforms (i.e. those serving Greene County), while blue is more common in the cities.

Whatever he was wearing at the time, Marcus Baggett was definitely a real police officer when he arrested Chris in 2004. Nevertheless, Chris still lumped him into the same category as all the security guards who gave him a hard time. So, according to Chris's earlier outlook, cops are only okay as long as they wear blue and black AND they don't try to arrest him for breaking the law.

Subsequent to the events of 28 October 2011, these distinctions are moot. Chris now hates and fears all security guards or police officers regardless of their uniforms or the source of their authority. In a Facebook status update from January 2012, made during an attempt to trawl the Fashion Square Mall for sweethearts, he states: "After October 28, 2011; I know have TOTAL Disrespect and Miscontent of the soo-called Officers of the Badge."

While CWCville has a police department in Sonichu, they rarely ever appear, except to support Chris and Sonichu while they defend the city instead. In Sonichu #5 Chris dismisses them from the battlefield as soon as he arrives, and in #9 they're only mentioned as part of the city's defenses. Finally, in #10, Chris introduces Constables Lou Perez and Gerald Grant, when Magi-Chan sends them to check Inos into a soup hotel.

A pickle cleverly disguised as a pistol.

Jerkops, in fitting with their mission to prevent autistic manchildren from procreating, are equipped with faux badges, evidently made of crackers, glitter glue and tree bark.[3] What purpose these serve is unknown, as no one would be so retarded as to fall for such a shoddy disguise.

In terms of weaponry, most Jerkops carry a stale breadstick, in place of a traditional nightstick, pulled from nowhere. The Jerkops also used handcuffs on one occasion, although this may not be standard issue. Jerkhief wields a Halberd-like Pole Axe, and wears a suit of powered armor with Laser Cannons and Missile Lauchers in its shoulders and back, along with the ability to fire off its fists like rockets- he also keeps a Pistol and a Metal Slingshot as backup weaponry. Jerkop Daitenzen wields a sword, and his costume seems to be made of a special material that protects him from the electric attacks of Chris-Chan Sonichu. 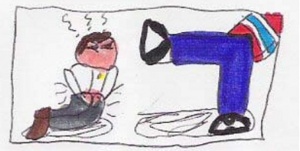 As demonstrated above, the best way to reduce those who prevent you from violating the law to a quivering pile of jelly is a good kick in the balls, or as Chris calls it, the "Sourdough region." The lowest levels of Jerkop require only a single kick to this region, while higher-level Jerkops such as the Jerkhief may require as many as five kicks, because their fat absorbs the impact. 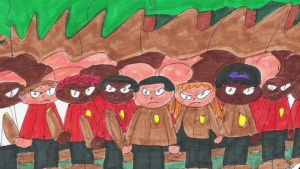 What Chris sees every time he steps in the mall.

As seen in Chris's earlier documentation, the Jerkops also make use of a "Hypno-Gun" to add to their numbers, since they have such a hard time reproducing. In describing the hypno-gun, Chris made it very clear that the Jerkop brainwashing only worked on "slow-in-the-minds", and others of lesser intelligence. It wasn't until Sonichu #9 where any mention was made of the idea of un-brainwashing the Jerkops, and even then, Chris makes it abundantly clear that his Electric Hedgehogs have managed to actually kill several of the otherwise completely innocent victims in their fights.