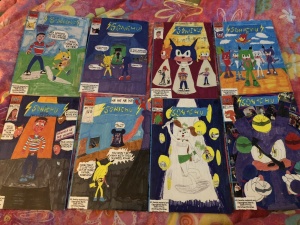 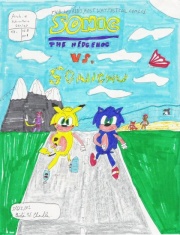 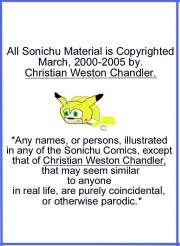 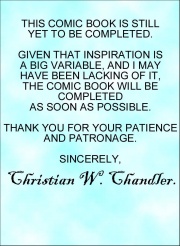 The Sonichu series began with issue #0 instead of #1, and each issue contained multiple separately-numbered "episodes", so readers often lost track of which story happened in which issue. For example, Black Sonichu (now known as Blake) was introduced in Episode #4, which was the fifth story in the overall series and the first story in Sonichu #1, which was in turn the second comic. Further confounding matters were the Sub-Episodes about Christian's Love Quest, which appeared in issues #0-4, and were numbered separately from the main stories.

On 4 September 2015, Chris confirmed the rumors as true and finally added new content to Sonichu for the first time in 5 years. 11 new pages were added to Sonichu #11 that day, with more pages added to the album "maybe every other week"; however, he cannot make any promises due to "unforeseeable variables and circumstances".

In June 2017, Chris began making regular updates to the comic again, completing Sonichu #11 that month and Sonichu #12 in October. Chris announced that Sonichu #13 would be an unofficial crossover with Planet Dolan; however, after falling out with DoopieDoOver, Chris scrapped the original concept and announced Sonichu #12-9, based around My Little Pony and featuring a new self-insert of his.

However, partway through #12-9, Chris's work on the comic and update schedule broke down. Chris began working on what was originally named Sonichu #14, which was to return to the normal Sonichu setting; however, he soon spilled paint on the first few unfinished pages and sold them on eBay for a quick buck, presumably scrapping his work once again (and illustrating a weakness of his "hand-drawing" technique).

However, Chris apparently still intended to complete #14, as he next announced Sonichu #15. The comic was intended as a remake/reboot of the early issues, but was soon derailed under the influence of the fancomic "Rosechu's Story", and Chris, under the Idea Guy's influence, hesitantly decided to retcon Rosechu to be transgender.

Before Chris could publicly reveal what was originally Sonichu #16, several pages were leaked in January 2018 by Kiwi Farms users in contact with the Idea Guys. The unfinished pages revealed that the comic's story had largely been penned by the Idea Guys themselves and brought together many of the concepts and plotlines they had been feeding Chris for the past few months. After months without updates, Chris revealed in May 2018 that he had continued to work on #16, but that he was now hesitant to release the nearly-finished comic now that he realized the Idea Guys – or an idea guy – had such an influence on it.

On 17 December 2019, Chris uploaded a complete set of the Sonichu series, including comics 0 through 13 of the main series, but also two fan comics that he has officially endorsed, to CWCville Shopping. Not being derived from his own geinus, they are a step below TRUE and HONEST Sonichu canon. Nevertheless he has sanctioned them as mostly true to his vision, and is exploiting these fruits of others' labors financially.

In his August 2009 résumé, Chris stated that his dream was to "get me paper-published with a comic book company like Archie, Marvel, DC or Dark Horse comics". He finally made this happen – sort of – in September 2015, when he discovered Lulu.com and put a bound copy of Sonichu #0 for sale for ten bucks. A print version of Book #1 appeared the following month. Although his Lulu account disappeared from public view after about a week, he continued to offer the books (autographed upon request) on Etsy. He made routine updates on Facebook.

A recipient of the first issue provided a review:[8]

Over the years Chris has dropped a few hints about specific plotlines. At one point he stated, "METAL SONICHU is NOT a secondary character; HE will be making his return as a MAJOR VILLIAN after Book 11 Possessed by the soul of Count Graduon."[9] He later elaborated, "Count Graduon will be the Major Villain beyond [Sonichu #10], possessing the Metal Sonichu that crashed on the moon back in Book 1.[10] The issue may also move to RuleCWC: Chris has said that "Darkbind and Zelina will be fighting Clawdorf with great sword and bow/arrow battles."[11]

There may also be a lack of Great Director intrusion: "After Book 10, I will be making LESS personal appearances in the pages, as having done so was a big mistake, because I had got carried away with the trials and tribulations in my life, real and online, that it completely messed me up."[12]

For Truth and Honesty, see the archived CWCipedia page on the Sonichu Comic Collection
Retrieved from "http://sonichu.com/w/index.php?title=Sonichu_(comic)&oldid=252219"
Categories:
Hidden categories: