This page lists the stuff Chris offered for sale in 2016. Also, for the first half of the year, he made hundreds in sales on various Sonichu-themed goods on Etsy before being kicked off due to failure to send orders.

On 13 July 2016, prompted by the Financhu Crisis, Chris began listing Pokemon cards for sale to raise money. Typically for Chris, he didn't bother researching the prices on the cards, instead choosing arbitrarily high numbers for his minimum prices.

The winning bidder did not pay.

Base Set Charizard Holo, No Shadow 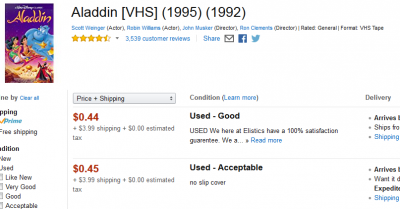 You can either buy Chris's copy for $3,000, or buy a different one for a much lower price.

Chris fell for the common Internet rumor that Black Diamond VHS editions of Disney movies are incredibly valuable, because the newer digital editions contain modern edits and so the only way to get the "original" is to buy up old tapes. In reality, these are not at all rare and demand is limited to a few obsessive collectors, so the tapes are only worth $5-$10.[1][2] Used copies of said tape on Amazon can be as low as 44 cents, and many other Disney movies on VHS can even cost just a penny (plus shipping, but still).