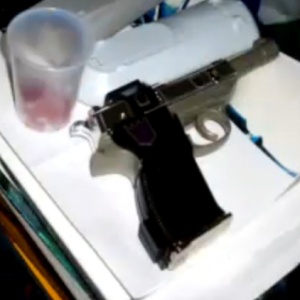 The pistol in "CWC is Angry", next to what appears to be a bloody fapcup.

Since Chris is fascinated by the Transformers, his primary frame of reference for firearms is Megatron, the evil Decepticon rival of the heroic Autobot Optimus Prime. In his original 1980s incarnation, Megatron transformed (somewhat controversially) into a Walther P38 pistol, which was coincidentally the preferred sidearm of the Nazi German armed forces in World War II.[1]

Chris would later drop the pistol in favor of the more versatile pocket knife and, even later, pepper spray, currently using a Baseball bat. He sold the pistol in August 2016. 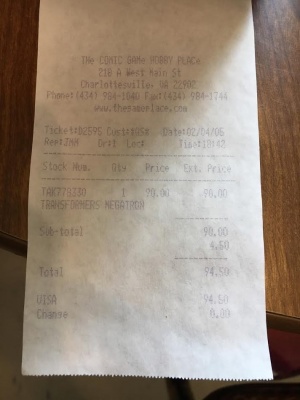 A proper use of gov'ment money.

The version of the toy that Chris owns is the original "generation one" mold used in the 1980s, although it's a reissue sold during the 2000s. It was bought from the GAMe PLACe. He paid $94.50; money coming directly out of his monthly tugboat. During the Financhu Crisis, he sold it for $50.

Since modern U.S. toy regulations forbid toys that look like guns, it's relatively cost-prohibitive to obtain a Megatron. Moreover, Chris's has a mechanism for firing small plastic pellets, which has never been available domestically. One of the reasons they don't sell Megatrons that turn into pistols anymore is public concerns that children brandishing toy guns could unwittingly provoke the police, forcing them to err on the side of caution and defend themselves with lethal force. Given his run-ins with the law, this sounds like exactly the sort of thing Chris might have done.

Use in real life

After losing the Chop Chop Master Onion's Rap Showdown contest, Chris took out his frustration on contest winner Adam Stackhouse by creating a video wherein he set up a photo of Stackhouse and shot at it with Megatron.

The pistol also appeared in the War Paint Video, in which Chris insisted that he was a Cherokee – apparently referring to the sort of Cherokees who carry Japanese toys of Cybertronian robots disguised as German weapons. The pistol was last seen when it appeared in the Divine Trial video, in which it was used to execute a Shadow doll meant to stand in for Clyde Cash.

In a Twitter update from June 2012, during a depressive episode, Chris alluded to shooting himself in the head with the pistol.

He had the pistol tagged as "highest priority" in a wish list he posted in 2015.

Use in the comics

The pistol in Sonichu Special 4.

Sonichu Special 4 saw the first hand-drawn appearance of Chris's Megatron pistol. In an attempt to rescue Kacey from her own boyfriend, Chris drives as fast as he legally can to their house and enters uninvited. Liquid, fearing a home invasion, charges Chris with a knife. Chris sidesteps this attack and then goes on to disarm Liquid, throw him to the ground and shoot him in both shins, permanently crippling him. Although Chris clearly understands his toy is not a real gun, he is compelled to draw real guns to look exactly like Megatron, just as every big rig he draws has to be a red cab-over, even if it's running over his gal-pal.

Fate of the pistol

Until August 2016, the fate of the pistol was unknown, given the destruction of Chris's house almost two years earlier. According to Kiwi Farms user TheRedBaron, he had purchased the Megatron pistol from Chris in August 2016 for $50, plus $10 shipping, during the Financhu Crisis. He posted a thread[2] with pictures of the pistol, the box it came in, extra parts, and even the original receipt for it. The receipt showed it had been purchased from the GAMe PLACe on 2 April 2005 for $94.50.