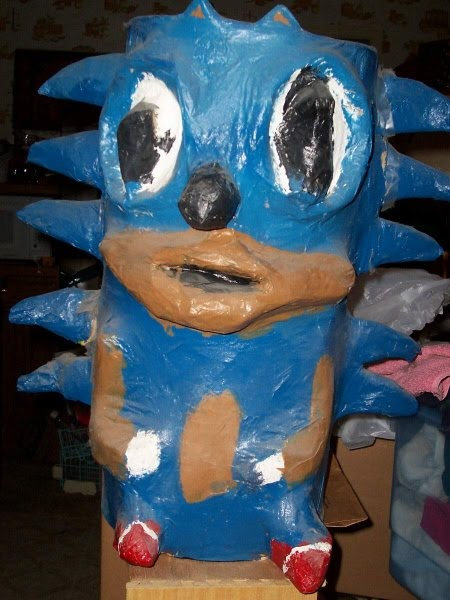 Originally, the totem was joined by an effigy in the form of a plate depicting Sonic. It is currently unknown if this has also survived. 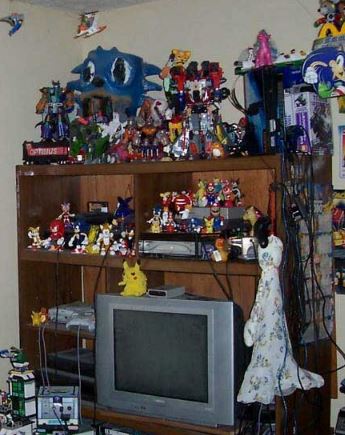 The totem appearing in a 2010 image of Chris's lair.

The totem has been featured very little in any of Chris's videos. After the house fire in January 2014, many assumed the Totem had been destroyed, but it suddenly reappeared in full view during Chris's Lesbian Sleepover Party Announcement, and went on to make its most major appearance to date several years after the fire; IMG 3207 (the video where Chris dry-humps a blowup doll trying to get a lesbian couple to mother his baby).

Offering it for sale

On 7 April 2017, due to money mismanagement by Barb leaving her bank account $800 in the red at the beginning of the month, Chris finally acknowledged the existence of the Sonic Totem by putting it up for sale[1] along with a small collection of Skylanders on eBay for $1,500. He filmed Sonic Totem and More to advertise it.

Chris got the idea to list the totem for sale after a Kiwi Farms user sent him the suggestion as a joke.[2] Naturally, since the troll had offered $1,000, Chris decided to raise his own asking price by 50%.

It was purchased within 4 hours.[3]

The buyer received the Totem in good condition.

One hour after the sale, Chris spent $400 on a gold necklace,[4] meant as a replacement for the one Barb had to pawn in November 2016.[5] Within three days, he spent $750 more on Skylanders avatar products, meant as prizes for a stamp raffle that would conclude on 30 April.[6]

He failed to ship the Sonic Totem to the buyer on time.

On 19 April, Chris confirmed in a post and video that the buyer had filed a dispute and that his account was $1,450 in the red, as a result of a temporary hold being placed on the sale money.

He explained that he didn't have enough money to ship the Totem – in spite of the fact that he had made a further $130 in sales on stamps since the Totem sold for $1,500. Ironically, Barb came to the rescue by cashing in more of their life insurance, and Chris finally mailed the Totem.[7]

On 21 April, the Totem buyer left positive feedback, concluding the sale and releasing the money to Chris.

On 22 April, the Totem's new owner posted as an Anon on 4chan's /v/ board,[8] confirming he received the Totem.

On 1 May, Chris partially doxed the buyer by blurting out his eBay username, "ashuraglitch", in a Captain's Log video.[9] He also disclosed that he lives in California.[7]

In addition to the Sonic Totem he wasted $1,500 on, Ashuraglitch[10] has collected hundreds of items on eBay, including "soakies" (soap bottles molded in the shape of classic cartoon characters), video games and an erotica comic.