The video was previously mentioned in CWC Responds to a bully named Johan, as Chris explained it was made to show Sam and Ellen how a natural birth was better and to compete with Johan who made his own video. Chris also made an online poll to let the public decide whose video was better - at the time of writing, Johan has a clear lead.

The demonic Sonic Totem reappears in this video. Members of Kiwi Farms were quick to point out how it has turned away in horror to what is happening next to it, and many ended up feeling sympathy for the artifact itself.

As of June 2, 2016, YouTube deleted the video due to it violating its policies on nudity and sexual content, earning Chris a strike on his channel. 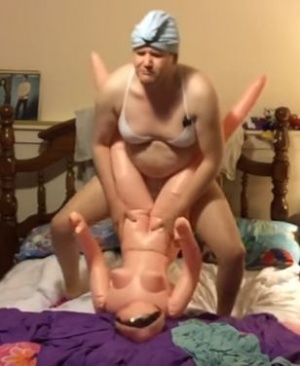 Chris shows us how it's done.

Hello Sam and Ellen! It's Christine Chandler coming to you live from... my bedroom! Which is separate from my Work Room. Anyway, so, y'all wanna see a little.. play, huh?

Hmm, make out... [starts making out with the doll, eventually moving down to the breasts and chewing on its nipples] Hmm. And it show... the pussy! I know where it is, the clitoris would be... [gibberish] assuming this would be the front, that'd be the back, cuz that's how big the hole is here. There's the clitoris, and the vagina's down here somewhere in the middle, and we don't wanna... hit the peehole which is in between.

I know about the labia... [dives in and starts sucking the doll's crotch]

[eventually kneels back down] alright lemme see, the uh... well I forget the name but we're on our side for this one. [lies down on side and presses doll up against his body with some struggle] [donkey?] [inaudible~go like that?] Yeah. And, it goes in there. [inaudible] [begins to hump the sex doll]

I know, yes, we're tribbing! Alright, then, bottom of the list, well, whatcha say, whichever, apparently, yeah let's put the arms up for this demonstration. The Spin. [Weird humming while spinning the doll on his crotch.] Y'all feeling this? Y'all feeling this? Now let me see, I believe that was the basics from your email, and, uh, moment. And now for some, some breaststroke. Just go with the flow, enjoy the view. [Sing-song voice] This way would be preferred.

Off top of my head, that's a good workout, so far. I hope I [gibberish] impressed y'all with that, and I look forward to your reply. It still dispenses. The thing's still, like, 5 to 7 inches long erect, so, Sam and Ellen, please have my babies. Have our babies. Have our little girls. Thank you, good night.